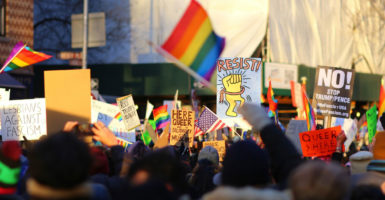 The left is dismissing a host of valid religious liberty claims as cases of "discrimination." (Photo: Pacific Press/Sipa USA /Newscom)

The biggest problem with current sexual orientation and gender identity (SOGI) laws—including “Fairness for All,” which proposes a grand-bargain compromise between SOGI laws and religious liberty—is that they do not appropriately define what counts as discriminatory.

As I explain in a new report for The Heritage Foundation, “How to Think About Sexual Orientation and Gender Identity (SOGI) Policies and Religious Freedom,” these are the laws that are being used to shutter Catholic adoption agencies, fine evangelical bakers, and force businesses and public facilities to allow men into women’s locker rooms.

Racially segregated water fountains were one form of discrimination that took race into consideration—in a context where it was completely irrelevant—and then treated blacks as second-class citizens precisely because they were black. The entire point was to classify on the basis of race in order to treat blacks as socially inferior.

As a result, such actions were rightly described as invidious race-based discrimination, and—given the entrenched, widespread, state-facilitated nature of the problem—they were rightly made unlawful.

Likewise, throughout much of American history, girls and women were not afforded educational opportunities equal to those available to boys and men. This form of discrimination took sex into consideration and then treated girls and women poorly precisely because of their sex, barring them from education in certain subjects or at certain levels despite being otherwise qualified.

As with invidious racial discrimination, such treatment took a feature (in this case, sex) into consideration precisely to treat women as less than men. The law rightly deemed such actions invidious sex-based discrimination, and—again, given the entrenched, widespread, and state-facilitated nature of the problem—Title IX of the Education Amendments was enacted to ensure that girls and women received equal educational opportunities.

Appropriate and Rightly Lawful Distinctions That Are Not Classified as Discrimination

When Title IX was enacted in 1972 and its implementing regulations were promulgated in 1975, the law made clear that sex-specific housing, bathrooms, and locker rooms were not unlawful discrimination. Such policies take sex into consideration, but they do not treat women as inferior to men or men as inferior to women. They treat both sexes equally because they take sex into consideration (they “discriminate”—in the nonpejorative sense of “distinguish”—on the basis of sex) precisely in a way that matters: by appreciating the bodily sexual difference of men and women in things such as housing, bathroom, and locker room policy.

Would we really be treating men and women equally in anything but an artificial way if we forced men and women, boys and girls, to undress in front of each other?

Justice Ruth Bader Ginsburg, in her majority opinion for the Supreme Court forcing the Virginia Military Institute to become co-ed, wrote that it “would undoubtedly require alterations necessary to afford members of each sex privacy from the other sex in living arrangements.” Yet we certainly would be treating people unequally if access to intimate facilities were based on factors wholly unrelated to privacy, such as race.

As a result, policymakers did not consider sex-specific intimate facilities as discriminatory in the first place, and laws explicitly reflected that commonsense understanding while rightly declaring racially segregated facilities to be unlawful.

The lesson here is that not all distinctions in fact should be deemed unlawful discrimination.

Not Discriminatory at All

That only women can get pregnant has no bearing whatsoever on the judgment of the conscientious doctor or nurse who refuses to kill the unborn. The insistence of LGBT activists that men actually can become pregnant highlights the point: Pro-life medical personnel refuse to do abortions on pregnant women and “pregnant men” (i.e. women who identify as men).

Thus, we can identify three different types of cases:

Any proposed policy intended to address the documented needs of people who identify as LGBT must take these categories into account without conflation.

Now consider Baronelle Stutzman, the 71-year-old grandmother who served one particular gay customer for nearly a decade but declined to do the wedding flowers for his same-sex wedding ceremony. Baronelle Stutzman lost her case and is appealing to the Supreme Court. (Photo: Alliance Defending Freedom)

The customer’s sexual orientation did not play any role in Stutzman’s decision. Her belief that marriage is a union of sexually complementary spouses does not spring from any convictions about people who identify as LGBT. When she says she can do wedding flowers only for true weddings, she makes no distinctions based on sexual orientation at all.

This is seen most clearly in the case of Catholic Charities adoption agencies. They decline to place the children entrusted to their care with same-sex couples not because of their sexual orientation, but because of the conviction that children deserve both a mother and a father.

Catholic Charities does not say that people who identify as LGBT cannot love or care for children; it does not take sexual orientation into consideration at all. Its preference for placing children with mothers and fathers is not an instance of discrimination based on sexual orientation—and the law should not say otherwise.

Purported gender identity discrimination presents similar problems. The Washington Post recently reported on a woman who was suing a Catholic hospital for declining to perform a sex reassignment procedure on her that entailed removing her healthy uterus. In that report, the Post captures the conflation of real and imaginary discrimination.

“What the rule says is if you provide a particular service to anybody, you can’t refuse to provide it to anyone,” said Sarah Warbelow, the legal director for the Human Rights Campaign. That means a transgender person who shows up at an emergency room with something as basic as a twisted ankle cannot be denied care, as sometimes happens, Warbelow said. That also means if a doctor provides breast reconstruction surgery or hormone therapy, those services cannot be denied to transgender patients seeking them for gender dysphoria, she said.

The two examples given, however, differ in significant ways. A hospital that refuses to treat the twisted ankles of people who identify as transgender simply because they identify as transgender would be engaging in invidious discrimination, but a hospital that declines to remove the perfectly healthy uterus of a woman who identifies as a man is not engaging in “gender identity” discrimination.

As for the Human Rights Campaign spokesperson’s claim that emergency rooms “sometimes” refuse to treat the twisted ankles of transgender patients, there is no evidence—including on their own website—that it or anything similar in fact happens. Furthermore, insofar as this “sometimes happens,” it seems reasonable to think that the media would focus so much attention on it that the hospital would reverse course within hours. It therefore seems highly unlikely that this alleged problem merits a governmental response.

My new Heritage report argues that any justified government policy must not penalize valid forms of action and interaction or burden the rights of conscience, religion, and speech. We can see this principle in action.

Because there was such widespread, entrenched systemic and institutional racism throughout American society in the 1960s, for example, and because social and market forces were not sufficient to remedy the problem, it was appropriate for government to respond. That response was properly tailored to meet this need. It defined discrimination to include racially segregated accommodations, places of employment, and housing providers while providing thin religious liberty protections.

Because the justification for antidiscrimination laws based on race was so strong and the need was so great, the law was appropriately broad with limited exemptions.

By contrast, consider laws that address discrimination based on sex. Because the nature of sex and the history of sexism did not represent an exact parallel to racism, the law did not treat them in entirely the same ways. Discrimination was legally defined so as not to include sex-specific intimate facilities, and much broader—and in some cases total—religious liberty exemptions were included. And to this day, sex is not a protected class for federal antidiscrimination law as applied to public accommodations.

Any proposed policies intended to meet the needs of people who identify as LGBT would need to be crafted in a similar manner. Without greater evidence of the justification for specific policy responses—greater documentation of what the needs truly are—it is hard to be specific. In general, however, the need clearly seems weaker than the need for policies designed to deal with discrimination on the basis of race and sex.

A policy response would therefore need to cover less ground, target discrimination more narrowly, define discrimination accurately, and avoid undermining the rights of conscience, religion, and speech. Alas, laws proposed by liberals today do not do this.