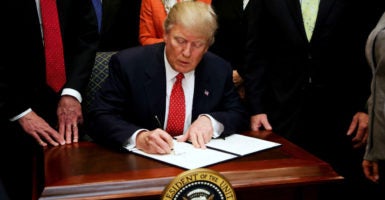 In light of President Donald Trump’s executive order that should put an end to the Waters of the United States (WOTUS) rule, The Heritage Foundation released the following statement:

President Trump’s executive order instructing the Environmental Protection Agency and the Army Corps of Engineers to reevaluate the Waters of the United States rule is welcomed news to property owners across the country—from farmers to families who want to use and enjoy their land as they see fit. WOTUS’ overreach is a perfect example of how Washington bureaucrats ignored the law and sought to expand their power while trampling on private property rights and state authority. Furthermore, the vast scope and vague nature of the rule undermined environmental protection itself. The executive order recognizes that the Environmental Protection Agency and Army Corps of Engineers need to develop a rule that is consistent with the law, provides regulatory clarity, and respects the role of states, which are in a much better position to identify their water quality concerns and identify solutions that best meet their specific needs.

Daren Bakst, a Heritage expert on environmental policy, among other issues, sat down with The Daily Signal to answer some basic questions about WOTUS and Trump’s new executive order.

What is the Waters of the United States (WOTUS) rule, and why is it so controversial?

Both the Environmental Protection Agency and the Army Corps of Engineers published the final WOTUS rule in 2015, which tries to define what “waters of the United States” means under the Clean Water Act. This definition is extremely important because it clarifies what waters these agencies have jurisdiction over under the law.

According to the Clean Water Act, these agencies can regulate “navigable waters,” which includes “the waters of the United States, including the territorial seas.” It is very important to remember that the actual terminology is “navigable waters.”

In the past, both the EPA and the Army Corps of Engineers have sought to increase their power by overreaching under the Clean Water Act, and this new rule took this overreach to a new level. Under the rule, the agencies could regulate almost any type of water, including water that wouldn’t be navigable in any normal understanding of the word, such as certain man-made ditches and even dry land that may hold some water only a few days of the year after major rains.

The rule is an attack on property rights. If a water is deemed jurisdictional, then a property owner may need to secure a costly and time-consuming permit to engage in certain activities.

Since almost any water imaginable could be covered under this rule, property owners who want to engage in even ordinary activities such as farming would be required to secure far more permits. They may not even bother to secure the permits because of the burden.

Making matters worse, the rule is subjective and vague. Even if someone is an expert on the rule, it’s extremely difficult to know whether a permit would be required. This lack of regulatory predictability has a chilling effect on property owners. They will simply decide not to engage in ordinary activities out of fear of violating the law.

What does Trump’s executive order do?

The executive order directs the EPA and Army Corps of Engineers to review the rule, and rescind or revise it. It will now be up to the EPA and Corps to make this happen.

Will this executive order hurt the environment, as critics allege?

Let’s be clear: The WOTUS rule is a federal power grab designed to have federal bureaucrats act like local zoning officials. Everybody wants clean water, and I’d fully expect the EPA and Corps to develop a rule that both protects the environment while not trampling on property rights and state rights.

By developing a rule that recognizes the need to work with states to address water issues, the EPA and Army Corps of Engineers will be helping the environment, not hurting it. Also, a clear and objective rule, unlike the mess that is the WOTUS rule, helps both the EPA and the Army Corps of Engineers with enforcement and makes consistent compliance by regulated entities far more likely.

Trump has signed an executive order that should spell the end of this egregious rule. Now, the EPA and Army Corps of Engineers can get rid of the rule and start developing a new rule that protects the environment, respects the rule of law and property rights, and recognizes the important role that states are supposed to play when it comes to implementing the Clean Water Act.