Where Conservatives Are in the Trump Era: 15 Takeaways From Their Biggest Conference 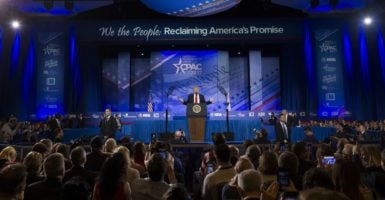 Five weeks into President Donald Trump’s presidency, the first time in eight years a Republican has been in the White House, where do conservatives see the country going?

Here are highlights from The Daily Signal’s coverage of the Conservative Political Action Conference, or CPAC, the largest annual gathering of conservatives:

In his speech, Trump emphasized a variety of issues that conservatives care about, saying, “We will build the wall and we are going to start soon,” as well as promising “a substantial upgrade for the military.” He also took aim at regulations:

2. The filmmakers behind the “Gosnell” movie discuss the real story.

Philadelphia abortionist Kermit Gosnell, whose clinic was dubbed a “house of horrors,” hasn’t received the attention his case deserves. Phelim McAleer and Ann McElhinney talk about this “serial killer.”

“It’s not only conservatives and Republicans who like that, but what we found in Wisconsin is that independents and, yes, even some discerning Democrats, like it when you do the things you say you were going to do,” said the Republican governor, no stranger to Democrat protests. “Commonsense conservative reforms work, they actually work, and people respond to them.”

Farage, who campaigned with Trump during the election, said the message of sovereignty and nationalism that drove United Kingdom voters to choose Brexit last June mirrors the populist vision that has taken power in Washington,” wrote Josh Siegel in his report.

“When in years to come, the generations that follow us study the history of this period, there is one year that will stand out,” Farage said. “That year is the year of 2016. Because in 2016 we witnessed the beginning of a global political revolution, and it’s one that is not going to stop.”

The Kansas Republican made the case that it isn’t about the number of refugees, but whether they are vetted sufficiently before coming to America. “You can’t bring people in the United States who want to kill us,” he told The Daily Signal.

Trump’s winning campaign manager and adviser suggested Trump was having an impact on the conservative movement. “This will be TPAC,” Conway said. “He has brought this infusion of energy. He made people feel from the beginning they are part of a movement. People felt so energized as they had a seat at the table. … He replaced this fiction of electability with this revelation of electricity.”

The author and Fox News contributor talked to The Daily Signal’s Kelsey Harkness about guns—and puppies.

“We have to bring people along now, so that the changes we all believe in will be sustained,” the former Republican presidential candidate added.

“Our job as conservatives, and as the national conservative movement, is to make possible what the establishment says is impossible,” the former South Carolina Republican senator who is president of The Heritage Foundation said. He warned:

DeMint also spoke with The Daily Signal about the first 100 days of Trump’s presidency:

“With respect to Iran, and its support for international terrorism and its nuclear weapons program, candidate Trump described everything that was wrong with Barack Obama’s nuclear deal with Iran,” the former United Nations ambassador said.

“He should abrogate that deal, end that deal as soon as possible,” Bolton added. “We need a clear statement of leadership by the United States that this was a strategic debacle for our country and we don’t intend to let it persist.”

“President Trump, I want to thank your administration for your support of law enforcement,” Mills, whose story was told last year by The Daily Signal, said in his remarks. “I know you’re being told by other members of law enforcement and associated groups that asset forfeiture reform is a bad idea, that it’ll help the cartels and terrorists. I want you to know there are many of us out in the field who don’t agree with that sentiment.”

“What [the 2015 repeal bill] demonstrated to me was that if you got the right president in the White House, you could send that bill back down to the other end of Pennsylvania Avenue, and you could repeal large pieces of the Affordable Care Act.”

Is this the year the wall on the border is actually going to happen? The Daily Signal’s Rob Bluey talked to the Arizona Republican about that and more.

In his speech, the vice president talked about Obamacare repeal and replacement, saying he and Trump want all Americans to have “access to quality and affordable health care insurance, which is why we’re designing a better law that lowers the cost of health insurance without growing the size of government.”

From the report by The Daily Signal’s Rachel del Guidice:

“This election was the American people saying, ‘Enough already with the corruption in both parties, Democrats and Republicans who have been here too long,’” Cruz [R-Texas] said.

Cruz told attendees of CPAC that one significant way politicians could deliver on “draining the swamp” is by paving the way for term limits for Congress.

CPAC, the largest annual national gathering of conservative activists, ran from Wednesday to Saturday at the Gaylord National Resort and Convention Center in National Harbor, Maryland, just outside Washington.