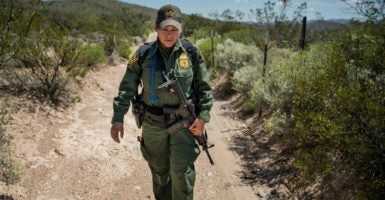 "We have to secure the border. That has to be job one," said Rep. Andy Biggs, R-Ariz. (Photo: Roberto E. Rosales/ZUMA Press/Newscom)

Extreme vetting and a border wall are the key issues facing the country under President Donald Trump’s administration—but aren’t the silver bullet solution to immigration, experts and members of Congress said Saturday.

“Extreme vetting is something that applies to the refugee side of this debate,” said Rep. Ken Buck, R-Colo., during a panel at the Conservative Political Action Conference, or CPAC.

The forum was titled “If Heaven Has a Gate, a Wall, and Extreme Vetting, Why Can’t America?” and covered a number of illegal immigration issues, from the national security impact to the economy.

Buck said the United States either shouldn’t take refugees from those countries, or take them only after doing adequate background checks.

“Really, what the president was talking about, what Congress was talking about, is when we’re dealing with countries that are hot spots of terrorism that are destabilized as a result of civil war, we don’t have the ability to go into those countries and find records to determine if someone has health issues, or criminal background, or is radicalized in some ways,” Buck said.

The Trump administration calls this approach “extreme vetting,” but critics charge it is a “Muslim ban.”

After judicial setbacks, the Trump administration will take a dual track of defending the current order, while also drafting a new order, White House press secretary Sean Spicer has said.

Washington state and Minnesota sued to stop the president’s executive orders. A federal judge in Seattle suspended  enforcement of the order. The 9th U.S. Circuit Court of Appeals in San Francisco upheld that temporary restraining order.

“This issue of multiculturalism has to be solved no matter what we do with immigration,” Gonzalez said. “We can do all the vetting we want, but if people come in and they are assimilated into groups, we are going to have a problem unless we take care of that.”

This extends into national security, he said, because often the younger generations are taught multiculturalism in schools.

“This is true for radicalization,” Gonzalez said. “It’s not really the immigrant, the guy who comes in. It’s his child or the second generation that becomes radicalized.”

This largely has been a government construct, he said.

“We have always been multiethnic. We have never been multicultural,” Gonzalez said of America. “Immigrants are pressed into ethnic groups that form the building blocks of multiculturalism.”

On Jan. 25, Trump signed other executive orders regarding immigration. One order called for “immediate construction of a physical wall on the southern border, monitored and supported by adequate personnel so as to prevent illegal immigration, drug and human trafficking, and acts of terrorism.”

Trump said he will ask Congress for an initial payment to build a wall at the border with Mexico—a project already authorized under the 2006 Secure Fence Act. After that, Trump said, he will seek reimbursement from the Mexican government.

Trump also issued an order scaling back funding for “sanctuary cities,” the term for municipalities that refuse to cooperate with federal officials in enforcing immigration law.

Immigration can’t be addressed without reintroducing the idea of a guest worker program, said Helen Krieble of the Vernon K. Krieble Foundation, who was the biggest advocate of the gate referred to in the title of the forum.

An audience member shouted, “Why not?”

“Because you can’t. It’s logistically impossible,” Krieble responded. “If that person has got a self-supporting job, has never committed a crime in the United States, they have no path to citizenship, no path to a green card, and no use of our social services, to allow him to apply for a simple work permit so that they are here legally is a good idea.”

However, Rep. Andy Biggs, R-Ariz., insisted: “You build the wall and plan for the gate. We have to secure the border. That has to be job one.”

That takes a wall, that takes technology, that takes boots on the ground. That takes all this administration says they are committed to doing. Similarly, they are talking about, I think  President Trump calls it,  a beautiful gate. He wants a gate. He wants people to have access. But, if folks are here, and they are then applying for these jobs that Helen is talking about, that has the potential to be very problematic.

If you are going to move in that direction, that’s why I say you have to do three things first—border control, internal enforcement, and you have to take away their inducements. But if you have inducements to come to America and apply for this card, then you have an inducement to be here, perhaps even illegally. If you’re going to allow this kind of program, you would want them in your home country to obtain that card and then work it out that way.

This report has been modified to flesh out the concluding quotation from Biggs, and to clarify Gonzalez’s point on younger generations of immigrants learning multiculturalism at school.