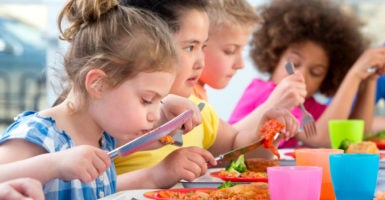 The Community Eligibility Provision is getting undue credit for the uptick in students receiving free school meals. (Photo: iStock Photos)

In reality, the Community Eligibility Provision turns welfare on its head by making it possible for children from middle-class and wealthy families to receive free school meals.

Advocates for the Community Eligibility Provision argue that some low-income children had been missing out on school meals because they didn’t complete the application process. This provision allegedly helps to ensure these otherwise eligible children receive these meals by getting rid of this process.

However, the U. S. Department of Agriculture has no evidence that eligible students aren’t participating in school meal programs, nor does it have data indicating the reasons for nonparticipation.

This claim about record numbers is a non-story. The number of children participating in the school breakfast program has been increasing steadily since the program began.

Thus, for most years over the past several decades it could be said that “a record number of low-income children” began to eat school breakfast.

But, is the Community Eligibility Provision responsible for the increased participation of low-income children in the school breakfast program over the last 10 years?

The Washington Post article cites a study that says school breakfast participation increased by 3.7 percent between the 2014-2015 and 2015-2016 school years, and further cites from the study:

The report itself explains that this recent growth is “consistent with recent progress.” In other words, the same percentage increases existed before the Community Eligibility Provision even kicked in.

Moreover, the same data source that The Washington Post article uses (from the U.S. Department of Agriculture) shows that the average annual growth in school breakfast program participation between fiscal year 1996 to 2016 is 4 percent (the median is 3.6 percent).

Therefore, as can be clearly seen from the data The Washington Post article uses, there’s nothing unusual with the post-Community Eligibility Provision annual growth rates.

The article further explains: “[The Community Eligibility Provision] also makes sure more kids get breakfast—9.4 percent more kids compared to control schools, according to the Department of Agriculture.”

The U.S. Department of Agriculture did do a study prior to the Community Eligibility Provision going nationwide that found more students participated in the school breakfast program.

But the USDA doesn’t claim to know whether these students were low-income students. The growth in participation could very well have come from increased participation of wealthier children.

It also shouldn’t be a surprise that more kids ate school breakfast when schools started providing free meals to everyone.

Finally, it’s misleading to say that the Community Eligibility Provision “makes sure more kids get breakfast.” This assumes those students now taking advantage of free breakfasts were not getting breakfast anywhere before.

The increase reflects the number of kids getting school breakfast, not breakfast in general.

In the end, success shouldn’t be measured by increases in the number of children who rely on the government for their meals. After all, we should all want families to supply their children’s needs without government intervention.

Articles like this underscore the lack of a demonstrated need for the Community Eligibility Provision. Congress should eliminate this provision immediately, rather than wait until it reauthorizes a new child nutrition bill.

After all, that’s the very reason why school meal programs exist in the first place.

Note: The original headline of this piece was altered for accuracy.