Coast Guard Seized Record Amount of Drugs in 2016. Here’s How It Can Do Even More. 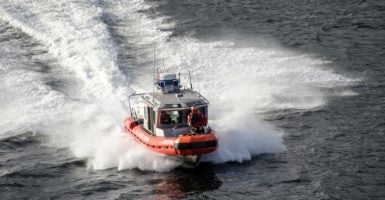 The U.S. Coast Guard seized more drugs in 2016 than in any previous year. (Photo: iStock Photos)

Evan Maguire is a member of the Young Leaders Program at The Heritage Foundation.

The year 2016 was a record-breaking year for the U.S. Coast Guard’s fight against drug trafficking.

By the end of October, the Coast Guard had seized over 416,600 pounds of cocaine worth nearly $5.6 billion, the largest one-year amount in the service’s history. This total was accumulated over 263 individual interdictions primarily in the Caribbean, the Gulf of Mexico, and the eastern Pacific Ocean.

During these operations, the Coast Guard also apprehended 585 suspected drug smugglers, 465 of whom were transferred to the U.S. for prosecution.

The Coast Guard is one of America’s most potent forces in the fight against drug trafficking, but the service also recognizes the uphill battle it faces in this fight.

The maritime flow of cocaine has rapidly increased in the last few years, with the annual estimate of cocaine shipments attempted (either successfully or those interdicted) rising from 577 tons in 2013 to 2,834 tons last year.

This means that during its record-setting year, the Coast Guard actually interdicted a smaller percentage of all cocaine in transit: around 7.1 percent of known attempted shipments, compared to 11.5 percent the year before.

The Coast Guard’s small, aging, and overworked fleet is one major area that warrants improvement. Some of the service’s Medium Endurance Cutters, which play a large role in Caribbean operations—including interdictions, were built in the 1960s and are in dire need of replacement.

Yet the Coast Guard has been chronically underfunded for a number of years, making it difficult to replace these legacy cutters. This in turn has hampered counternarcotic efforts.

Indeed, Coast Guard Commandant Adm. Paul F. Zukunft lamented that though the service has “80 percent awareness” of all illegal operations, “we can only act on about 20 percent of that because of the resource constraints we have. We’re giving 60 percent of what we know, literally, a free pass.”

Vice Adm. Charles Ray, Coast Guard deputy commandant for operations, echoed Zukunft’s sentiment in a hearing on drug trafficking last week. When asked what it would take to get the interdiction rate to 100 percent, Ray responded:

You need more Coast Guard cutters on the water and the package that goes with them, the airborne use of force helicopters, the overhead maritime patrol aircraft, and when you raise that number—right now, our current numbers down in that transition region are about 6.0 cutter presence and usually we have four airborne use of force helicopters … You double that, you’d make a pretty good dent. That’s why our Offshore Patrol Cutter program, which is a recapitalization, is so important for that.

Drug interdictions represent only one of the Coast Guard’s primary missions. The Coast Guard is also protecting America’s fishery resources, performing search and rescue missions, and providing port security both at home and to the other armed services stationed abroad, to name just a few of its daily responsibilities.

Given this broad workload, the Coast Guard will be strained further unless both Congress and the Trump administration better support its efforts.

Legislators can start by making a stronger commitment to programs such as the Offshore Patrol Cutter, while ensuring that Coast Guardsmen receive the manning, training, and maintenance they need to keep defending our nation at sea each day.