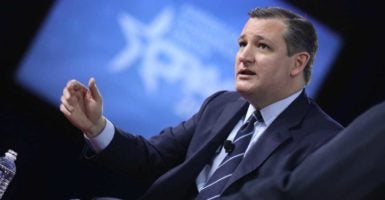 Now is the time for lawmakers to follow through on promises they made in their 2016 campaigns, Sen. Ted Cruz, R-Texas, told the crowd Thursday at the Conservative Political Action Conference.

“This election was the American people saying, ‘Enough already with the corruption in both parties, Democrats and Republicans who have been here too long,’” Cruz said.

Cruz told attendees of the Conservative Political Action Conference, or CPAC, that one significant way politicians could deliver on “draining the swamp” is by paving the way for term limits for Congress.

In January, Cruz and Rep. Ron DeSantis, R-Fla., introduced an amendment to the Constitution that would limit members of the U.S. Senate to two six-year terms and members of the House of Representatives to three two-year terms.

Currently, members of Congress are not subject to term limits.

Cruz said that the knife cuts both ways.

“Let’s deliver on the promises and if we do that, we’ll win at the ballot box and if we don’t, the people will hold us accountable for that, too,” he said.

Put Conservatives on the Supreme Court

Cruz said he is confident the Senate will confirm Judge Neil Gorsuch, who was nominated last month by Trump to fill the U.S. Supreme Court seat of the late Justice Antonin Scalia.

“After eight years of [President Barack] Obama, there are few things more important than putting principled constitutionalists [on the bench],” he said. “The Gorsuch nomination is important, it matters, and … Judge Gorsuch will be confirmed.”

Scalia is not replaceable, Cruz said, but much can be done to protect his conservative legacy.

“We’re not going to get any better than Justice Scalia,” he said. “The best we can do is to preserve constitutional victories like upholding the Second Amendment, like protecting religious liberty.”

Cruz also said he thinks that an opportunity to fill a Supreme Court seat with yet another principled conservative will come soon.

“This summer, I think we’ll have another Supreme Court vacancy,” Cruz said. “If that happens, as much as the left is crazy now, they will go full-Armageddon meltdown.”

Justice Ruth Bader Ginsburg and Justice Anthony Kennedy are both in their  80s.

Addressing the administrative or regulatory state is something Cruz said he hopes will be a priority for Trump, and has talked with him about.

“The regulatory state is Congress’ efforts to undermine the president’s authority, and my hope is that you will see the president use that constitutional authority to rein in uncontrollable, unelected bureaucrat[s] and rescind regulations,”  Cruz said.

During a briefing with reporters before his CPAC speech, Cruz said he hopes Congress will act swiftly in repealing Obamacare.

“Congress should act expeditiously to honor our promise,” Cruz said.

If Congress does not act, Cruz said, it will be ignoring a mandate from voters in the past three national elections.

“What matters is that we honor our promise,” Cruz said, adding:

For six years, we campaigned on repealing every word of Obamacare. We had three landslide elections in 2010, 2014, and 2016, all of which centered on the promise of repealing Obamacare … The American people want to see it done.