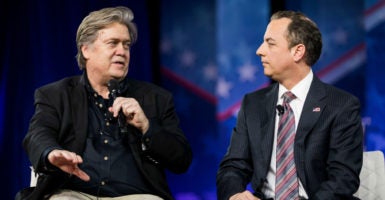 “They are a corporatist, globalist media that are violently opposed to the economic nationalist agenda of Donald Trump,” @SteveKBannon says

Priebus, the White House chief of staff, and Bannon, assistant to the president and chief strategist, were a star attraction at the Conservative Political Action Conference, the largest gathering of conservatives in the country.

“Every day in the Oval Office, he tells Reince and I: ‘I’ve committed to do this for the American people, I promised this is what I’m going to do and I’m going to fulfill my promise,’” Bannon told the CPAC audience, adding:

We want you to have our back. But more importantly, hold us accountable for achieving what we promised.

The two Trump aides addressed the conference in a question-and-answer format with Matt Schlapp, chairman of the American Conservative Union, which sponsors CPAC.

Bannon and Priebus represent different factions of the conservative movement.

I’ve got to tell you, if the party and the conservative movement are together, they can’t be stopped. He was the one person; I watched 16 people kill each other. It was Donald Trump who was able to bring this party, this movement, together.

The two top White House officials were a warmup for Vice President Mike Pence, who was scheduled to speak later Thursday. On Friday, Trump is scheduled to be the first president since Ronald Reagan to deliver remarks at the annual gathering of conservatives.

Both men referred to the news media as the “opposition party.”

Characteristically, Priebus criticized the media for presenting an inaccurate narrative.

Bannon, by contrast, said: “They are a corporatist, globalist media that are violently opposed to the economic nationalist agenda of Donald Trump.”