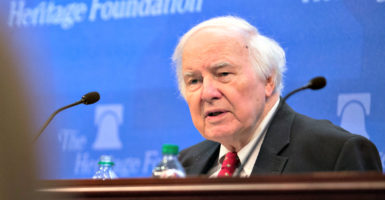 Michael Novak, here at the July 2016 launch of The Heritage Foundation's Index of Culture and Opportunity, expanded our conceptual grasp of economic liberty beyond dry formulas to include a more complete picture of the creative, human, and virtuous nature of entrepreneurship. (Photo: Willis Bretz for The Heritage Foundation)

The news of Michael Novak’s death Feb. 17 saddened close friends and colleagues in the community of think tank scholars who drew so much from his writings and lectures.

Novak’s perspectives expanded our conceptual grasp of economic liberty beyond dry formulas to include a more complete picture of the creative, human, and virtuous nature of entrepreneurship.

It is precisely this fuller understanding of the global economy that we seek to explore and promote in The Heritage Foundation’s annual Index of Economic Freedom. Novak, a faithful supporter of the index, died within days of the publication of the latest edition.

Edwin Feulner, founder and longtime president of The Heritage Foundation, noted that Novak’s advocacy of “The Spirit of Democratic Capitalism” (perhaps the most famous of his more than 40 books) reflected not only a commitment to the core principles of private property and market-based economic incentives. Novak also was committed to “a social order favorable to alertness, inventiveness, discovery, and creativity”—the very essence of entrepreneurship.

Indeed, the Rev. Robert Sirico, co-founder and president of the Acton Institute, wrote in a 2010 Heritage report how Novak argued that the account of creation in the Book of Genesis was the first and most dramatic example of entrepreneurship:

Entrepreneurs must have access to the material factors of production; they must be permitted to acquire and trade property. They must act in an atmosphere of freedom. They should not have to suffer slights from religious leaders who do not approve of the talents and gifts that God has given them.

And yet, Novak reminded us in a 2009 Heritage report, these entrepreneurs must operate in civil societies where people cooperate to solve problems through local associations and businesses, thus thwarting the always eager and coercive bureaucrats of the state from stepping in to try to run everything.

As Roger Scruton pointed out in a 2015 Heritage report, Novak’s 1981 study of the corporation’s place in the religious view of human communities, “Toward a Theology of the Corporation,” asserted that such natural associations or groupings could

have the marks of divine grace: The best of them are creative, free, with virtuous character and insight (their primary capital), take risks on behalf of others and themselves, and stand in accountable relation to their members.

In the foreword to the 2017 Index of Economic Freedom, James Wallner observes that economic freedom “is a critical element of human well-being and a vital linchpin in sustaining a free civil society.”

Michael Novak was a true champion of that economic freedom. May he rest in peace after a battle well fought.