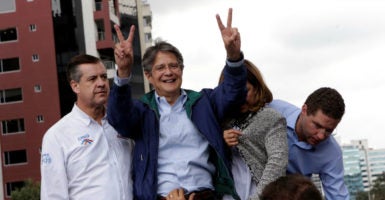 Last weekend, Ecuadoreans did something they haven’t done since 2006: They voted in significant numbers against the socialist Alianza Pais party of three-term leftist President Rafael Correa.

After a suspiciously delayed ballot count, electoral authorities finally certified on Feb. 23 that more than 60 percent of Ecuadoreans voted for a candidate other than Correa’s hand-picked successor, former Vice President Lenín Moreno.

That has forced a run-off election on April 2 between Moreno and the runner-up, center-right opposition leader Guillermo Lasso.

In so doing, those voters took the first step away from Correa’s populist authoritarianism and toward greater economic and political freedoms for Ecuador.

As soon as Correa was elected in late 2006, he began laying the groundwork to bring “21st-century socialism” to Ecuador following the playbook of his political mentor, the late Venezuelan President Hugo Chávez.

The hallmarks of the Correa years in Ecuador have been class warfare, polarization, and intolerance of dissent. A new constitution was rammed through the Correa-dominated legislature in 2008 that trampled on separation of powers and rule of law.

Already in control of the country’s oil, Ecuador’s government under Correa expanded its reach into other economic sectors.

Pervasive corruption undermined the rule of law and weakened property rights. The private sector struggled to operate and compete with a growing public sector in what became a restrictive entrepreneurial environment.

As a result, Ecuador’s scores in The Heritage Foundation’s annual Index of Economic Freedom plummeted. From a score of 54.6 in 2006, when it ranked 107th out of 157 countries, Ecuador’s score has dropped to 49.3 and landed the country in the index’s lowest category—Repressed.

It is now ranked 160th out of 180 countries worldwide, and 28th among the 32 countries of Latin America. Three of the four other countries at the bottom of that regional list are also members of the Venezuela-led Alliance for the Peoples of Our America.

The election of Lasso could turn things around for Ecuador. A former banker from the country’s second-largest city and commercial capital, Guayaquil, Lasso is described by the Financial Times as a free-marketer whose ideological soulmates include President Mauricio Macri of Argentina and President Pedro Pablo Kuczynski of Peru.

The rise of Chávez and protégés such as Correa signaled a depressing return to the days of leftist “caudillos” (strongmen) who ruled Latin America in decades past. But in the past few years, voters throughout the region—for example, in Argentina, Peru, and Brazil—have been turning away from that discredited model.

It looks as if many people in Ecuador are fed up, too. The question is, will enough of them vote for economic freedom on April 2?