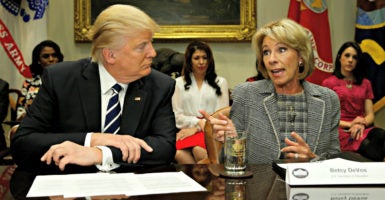 Donald Trump prevailed where other Republican presidential candidates failed in Midwestern states in part because of new right-to-work laws that have diminished the power and influence of the teachers’ unions, according to labor policy analysts.

“Unions have been knocked silly in Wisconsin, thanks to the one-two punch of Act 10 and right-to-work,” @workerfreedom’s Matt Patterson says.

Final election results have Trump narrowly winning Wisconsin’s 10 electoral votes by a margin of 47.9 to 46.9 percent over Hillary Clinton, the Democratic candidate. Trump had 1,409,467 votes to Clinton’s 1,382,210.

“Did the labor reforms enacted in Wisconsin and neighboring Michigan help Donald Trump win those states?” Matt Patterson, executive director of the Center for Worker Freedom, said in an email to The Daily Signal. “No question in my mind. Hard to fight when your bazooka’s been replaced by a squirt gun.”

Wisconsin became a right-to-work state in 2015, Michigan in 2013. Since then, government figures show, the teachers’ unions in both states have lost thousands of dues-paying members.

The drop has been particularly precipitous in Wisconsin, where in 2011 Gov. Scott Walker signed legislation that reformed the state’s collective bargaining process. In fact, the Wisconsin Education Association Council has lost about 60 percent of its members since Walker’s reforms were implemented, an analysis of public records by the Education Intelligence Agency shows.

Under Act 10, also known as the Wisconsin Budget Repair Bill, most of Wisconsin’s government workers, including public school teachers, are now required to contribute more for their pension and health care benefits.

The Wisconsin Education Association Council had about 100,000 members before Act 10 passed; the latest figures show the union with 36,074. The decline reflects what has happened nationwide, the MacIver Institute for Public Policy, a free-market think tank in Wisconsin, reported.

The Wisconsin and Michigan unions are both affiliates of the National Education Association, the nation’s largest union for workers in public schools.

The 3 million-strong NEA lost more than 300,000 members in affiliated state teachers’ unions from 2010 to 2015, according to the analysis by the Education Intelligence Agency cited by the MacIver Institute. That’s a membership decrease of 10 percent. So what is the political fallout?

“There’s no doubt that with the decline in union membership here in Wisconsin, the political clout of the union bosses and their ability to automatically turn out members for Democrats has declined dramatically,” Brett Healy, president of the MacIver Institute, told The Daily Signal, adding:

When we look at the decline in union membership and compare it to the recent political fortunes of the Democratic Party, you can clearly see that when people are given the ability to choose whether or not they want to join a union we are seeing less people voting for Democrats.

After the Wisconsin Education Association Council’s loss of tens of thousands of paying members, it has become evident that the teachers’ union’s ability to influence the outcomes of elections and public policy decisions has waned in the past few years, Healy added.

“The Wisconsin Education Association [Council] was the single biggest political player in the capital, but after the passage of Act 10 and right-to-work, their membership, which is where they derive their political power, has declined,” he said. “A majority of teachers in Wisconsin have decided that their money is better spent in other ways rather than turning it over to union bosses.” Act 10 has been transformative not just politically, but financially.

A MacIver Institute analysis of the legislation’s budgetary impact found that it saved Wisconsin taxpayers more than $5 billion. Most of these savings were generated by requiring government employees to contribute more for their retirement, according to the analysis.

“Gov. Walker and the Republican legislature not only saved Wisconsinites an incomprehensible amount of money but they also fundamentally changed government in Wisconsin forever,” Healy said a year ago.

Trump benefited politically from right-to-work changes in Michigan just as he did in Wisconsin.

But the billionaire developer’s personal appeal with blue-collar union workers gave him an advantage other Republican candidates have not had recently, Vinnie Vernuccio, director of labor policy at the Mackinac Center, a free-market think tank in Michigan, said in an interview.

“The Michigan teachers’ unions, which have led the charge politically in the state, have been weakened in recent years and that certainly helped Trump,” Vernuccio said. “But don’t underestimate the union vote for Trump in key swing states. Exit polls show he did surprisingly well.”

Among union households (where at least one person is a union member), Trump’s margins improved significantly over those of Mitt Romney, the former Massachusetts governor who was the Republican presidential nominee in 2012.

When Michigan passed its right-to-work law in 2013, the Michigan Education Association had 113,147 members, the Mackinac Center reported. By 2016, the union had 90,609 members, a decline of about 20 percent. “Unions have been knocked silly in Wisconsin, thanks to the one-two punch of Act 10 and right to work,” Patterson, of the Center for Worker Freedom, a Washington-based nonprofit affiliated with Americans for Tax Reform, told The Daily Signal:

Give people the chance to leave their union, it turns out, and lo and behold there’s a stampede for the door. And these fleeing workers take their money with them, money that unions can no longer use to buy politicians.

John Mozena, vice president of marketing and communications for the Mackinac Center, said in an email that he sees a growing separation between rank-and-file union members and union leaders that worked to Trump’s advantage:

In labor strongholds like Michigan, Wisconsin, Indiana, West Virginia and Missouri, union leaders have failed to turn out enough voters to create notable electoral consequences for politicians who introduced, supported, or voted for right to work or other worker freedom legislation.

That’s in part because union members have largely come to realize that these laws don’t actually hurt them or their unions. In fact, [the laws] give them as individuals more options than they had before.

Many union members also are voting against candidates that receive the lion’s share of their leaders’ support.

The contrast was most stark in the 2016 election, where almost all union leaders endorsed and used their members’ money to support Clinton. Yet in key states like Ohio, almost half of union members voted for Trump.

The only states to register significant increases in active membership in NEA-affiliated teachers’ unions over five years, according to the Education Intelligence Agency analysis, are Delaware (5 percent), Vermont (8 percent), Montana (16 percent), and North Dakota (19 percent).

After spending several months combing through the U.S. Department of Labor’s LM-2 financial disclosure forms, researchers with the Center for Union Facts found that unions directed about $530 million in membership dues to the Democratic Party and to left-leaning special interest groups from 2012 to 2015.

The Center for Union Facts is a Washington-based nonprofit that advocates transparency and accountability on the part of organized labor. Every labor organization that falls under the Labor-Management Reporting and Disclosure Act must file an LM-2.

“An unfortunate situation has developed where unions are more focused on politics than on collective bargaining or workplace issues,” @Richard_Berman says.

Recipients of union donations identified by the Center for Union Facts include Planned Parenthood and the Democratic Governors Association. These donations fall within labor’s political advocacy budgets, which are funded by dues and “disguised as worker advocacy related to collective bargaining—separate from direct campaign contributions,” the center said in a release.

“I do believe a very unfortunate situation has developed where the unions are more focused on politics than they are on collective bargaining or workplace issues,” Richard Berman, the center’s executive director, said in an interview with The Daily Signal.

Since surveys show that about 40 percent of union households vote Republican, this means the dues of a substantial number of union members are directed toward political causes they do not support, Berman said.

But he said he sees a strong potential for the growing right-to-work movement to level the political playing field in future election cycles, as it did in 2016.

In the meantime, Berman said, the new chairman of the National Labor Relations Board should use the board’s regulatory powers “to provide enough transparency in the area of labor finances” to inform union members of leadership’s activities.