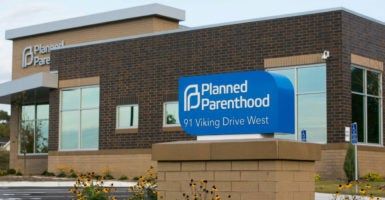 Live Action, a nonprofit organization dedicated to ending abortion and protecting the right to life, has released videos and findings that demonstrate the urgent need for Congress to defund America’s largest abortion provider, Planned Parenthood.

According to a report released in January, a Live Action investigation revealed that “Planned Parenthood lied to the media about retraining thousands of staff” with regard to reporting sex trafficking.

Back in 2011, the organization caught Planned Parenthood on film advising an undercover investigator posing as a pimp on how to get birth control and abortions for underage prostitutes.

Planned Parenthood vowed to retrain staff and fire any employees who potentially violated abuse reporting laws. One survey found that over a quarter (29.6 percent) of survivors of trafficking visited a Planned Parenthood during their abuse.

Yet instead of training its employees to spot and report trafficking, according to Live Action’s report, Planned Parenthood trained employees how to identify undercover journalists and discern whether or not they were being recorded.

Live Action put this claim to the test by calling 97 Planned Parenthood facilities. It turns out that 92 of them provided no prenatal services.

As calls to defund the abortion giant have escalated in recent years, Planned Parenthood has repeatedly cited prenatal care as a vital service that women will lose access to if federal dollars are diverted to other health centers not entangled with the abortion industry.

After being exposed by Live Action, Planned Parenthoods across the country removed references to prenatal care from their websites.

Then, at the end of January, Live Action revealed that Planned Parenthood uses ultrasounds to determine the unborn child’s age and position in the womb for purposes of aborting the child, but refuses to provide ultrasounds to women who want to keep their babies and would like to check on their health and that of their baby.

As one Planned Parenthood staffer put it bluntly on one of Live Action’s recordings, “We only do ultrasounds if you are terminating.”

In February, Live Action released testimony from former Planned Parenthood employees who claimed that its facilities must hit monthly sale quotas for abortion. Planned Parenthood gave its employees incentives to meet those quotas, such as throwing pizza parties and giving paid time off.

One former employee spoke of how staff were trained “to really encourage women to choose abortion; to have it at Planned Parenthood, because it counts towards our goal.”

It’s not news that abortion is quite profitable for Planned Parenthood, and if the allegations in the testimony are true, it is grotesque that Planned Parenthood uses parties and vacation time to incentivize employees to push women toward abortion over life-affirming options.

Earlier this week, Live Action released additional testimonials from former Planned Parenthood employees who spoke about the abortion giant’s abortion-centric business model that cut doctor-patient visit times in half and led to women being herded in the facility “like cattle.”

Managers also highlighted that despite the often repeated myth, Planned Parenthood does not provide mammograms and offers little support to pregnant women who are going forward with a pregnancy.

Congress should disqualify Planned Parenthood affiliates and other abortion providers from receiving taxpayer funds. Repealing Obamacare using language from the 2015 reconciliation measure is the best place to start.

If the reconciliation bill is crafted as it was in 2015, it would make Planned Parenthood affiliates ineligible from receiving Medicaid reimbursements for one year after the enactment of the bill. Such federal reimbursements constitute a significant portion of the roughly $500 million in government funds sent to the nation’s largest abortion provider each year and should be cut.

The ultimate solution is for Congress to pass, and the president to sign, the No Taxpayer Funding for Abortion Act.

The bill’s sponsor, Rep. Chris Smith, R-N.J., explains that the legislation makes the Hyde Amendment and other current abortion funding prohibitions permanent and government-wide while ensuring that Obamacare (until it is repealed) conforms with the Hyde Amendment.

It also requires health insurance plans on Obamacare exchanges to provide full disclosure, transparency, and the prominent display of the extent to which they cover abortion so as to empower people to opt out.

Trump has committed to signing the bill into law if it reaches his desk. The bill passed in the House of Representatives the week of the 2017 March for Life, and the Senate should follow suit to finally and completely separate American taxpayers from the grisly abortion business.