This Federal Agency Is Targeting a Family Business. A Religious Liberty Organization Is Calling on Trump to Protect It. 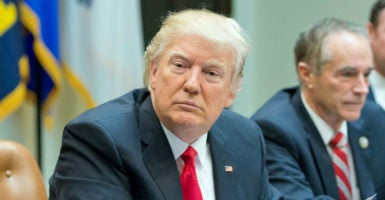 A leader of the religious liberty movement is asking President Donald Trump to defend a family business targeted by the USDA. (Photo: Ron Sachs / Pool via CNP)

A religious liberty organization is asking President Donald Trump to sign a proposed executive order that would protect the religious freedom of a family-owned business and others like it from the punitive actions of an executive agency.

“The Vander Boons are at risk of having their plant shut down and their employees left jobless because of the [Department of Agriculture’s] unfair targeting of the Vander Boons for their religious beliefs,” wrote Michael Farris, the new president of legal defense organization Alliance Defending Freedom, in a letter sent to Trump Wednesday.

Farris asked Trump to sign an executive order that could help Americans like Donald and Ellen Vander Boon, owners of the West Michigan Beef Company.

The Vander Boons are facing closure due to the United States Department of Agriculture threatening to pull inspectors from reviewing their business. The department had made a decision that “prohibits [the] family-owned Michigan meatpacking facility from including religious literature concerning marriage on a break room table,” according to Alliance Defending Freedom.

In early February, a copy of the religious freedom executive order was first obtained by ABC News.

“If President Trump signs the leaked version of the draft [executive order], it would provide immediate help to Mr. Vander Boon,” Jeremy Tedesco, senior counsel at Alliance Defending Freedom, wrote in an email to The Daily Signal.

Tedesco added that a section in the leaked executive order specifies that “‘[a]ll agencies shall promptly withdraw or rescind any rulings, directives, regulations, guidance, positions, or interpretations that are inconsistent with this order to the extent of their inconsistency.’ This section would require the USDA to rescind its unlawful policy and the order that Mr. Vander Boon restrict his religious expression.”

In 2015, Dr. Ryan Lundquist, the USDA site inspector for West Michigan Beef Company, found a religious tract about marriage that Donald Vander Boon placed on the break room table of the family-owned business, according to a press release from Alliance Defending Freedom.

Lundquist took the article and reported it to Robert Becker, the USDA frontline supervisor, and Lundquist and Becker held a meeting with Vander Boon, “at which Becker threatened three times to remove USDA inspectors if Vander Boon didn’t agree to refrain from placing the article in the break room,” according to Alliance Defending Freedom.

In a statement provided to The Daily Signal, a spokesman at the USDA said the organization has “zero tolerance for any form of workplace harassment or intimidation.”

“The Food Safety and Inspection Service is committed to providing our employees and inspectors a workplace free from all forms of harassment or intimidation,” the spokesman said.

Vander Boon has filed a complaint with the USDA.

“The USDA threatened to remove its inspectors if Mr. Vander Boon continued to express his religious beliefs about marriage,” Tedesco, of Alliance Defending Freedom, said. “Meatpacking facilities cannot operate without inspectors present and monitoring operations to ensure food safety. The USDA’s threat has never been lifted.”

Vander Boon’s complaint has not received any response, “other than two letters in September 2015 informing him that his complaint was received and forwarded to the director of the agency’s Civil Rights Division,” according to Alliance Defending Freedom.

Conservative leaders say the proposed executive order would protect all Americans, not just a select few with specific beliefs.

Travis Weber, the director of the Center for Religious Liberty at the Family Research Council, said the situation of the Vander Boons’ family business is a demonstration of why the executive order is essential.

“The situation of Donald and Ellen Vander Boon is a perfect example of the type of out-of-control federal government overreach into personal religious beliefs that needs to be reigned in by executive action,” Weber said in an email to The Daily Signal.

“This calls for President Trump to step in with executive action protecting the freedom of the Vander Boons and others like them, and he should sign an executive order protecting religious liberty,” he added.

“Trump’s [executive order] would protect the religious liberty rights of all Americans in very tailored ways that address [the] problems of today,” Anderson said in an email to The Daily Signal. He added:

It ensures that the government will not discriminate against beliefs that are under assault, and protects a religious organization’s right to maintain their mission and identity in their staffing decisions and programming, while not losing the ability to partner with the government.

Anderson also said the executive order would “take nothing away from anyone,” but “simply ensure that the public square remains open to all religious voices, even when those voices diverge from the government’s view on contested questions.”

Don’s situation also highlights how much similar people who own small, family-owned businesses would directly benefit from the religious freedom executive order you are considering. Your signing that order will ensure that hardworking Americans, along with nonprofits and social service organizations, will not have to fear government punishment or bullying simply for peacefully living out their faith. On behalf of Don and Ellen, we ask you to please sign the religious freedom executive order.