In 1 Chart, What Your Favorite Fast-Food Items Would Cost With $15 Minimum Wage 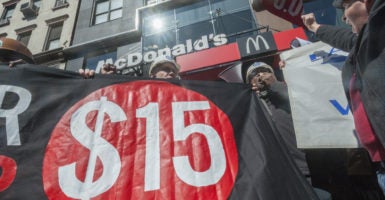 Several states and cities have passed legislation raising the minimum wage to $15 an hour. (Photo: Richard B. Levine/Newscom)

For Americans hitting the drive-thru at their local McDonald’s, a $15-an-hour minimum wage could hit them in their wallets.

According to a January report released by James Sherk, a former research fellow in labor economics at The Heritage Foundation, fast-food prices would rise by 38 percent under a $15-an-hour minimum wage and cause a 36 percent drop in employment.

Sherk’s research comes after several cities and states across the country voted to raise their minimum wages, with increases typically phased in over the next five years.

Additionally, several Democrats have advocated a $15-an-hour minimum wage at the federal level, as does Sen. Bernie Sanders, I-Vt., who spoke about the need for an increase to the federal minimum wage while campaigning for president last year.

In his paper, Sherk said that raising the minimum wage would lead to higher labor costs for fast-food restaurants. Restaurant owners operating on already slim profit margins would then need to raise their prices.

Those higher menu prices would have a direct impact on customers who frequent fast-food establishments.

Here’s how prices at some of the most popular fast-food restaurants would change with a $15-an-hour minimum wage.