How Arizona Is Using Licensure Laws to Punish Compassion 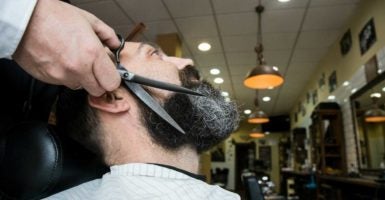 Practicing cosmetology in Arizona without a license is a crime. (Photo: Andrés Benitez Westend61/Newscom)

Has it become illegal in America to give someone a free haircut?

Juan Carlos Montesdeoca was a cosmetology student at the recently shuttered Regency Beauty School in Tucson, Arizona. As a former homeless man, he knows that the homeless often go months without receiving a basic haircut.

Putting his new talents to good use, he provided free haircuts to the homeless at Tucson’s Santa Rita Park for several months.

Unfortunately for Montesdeoca and his clientele, the Arizona State Board of Cosmetology caught wind of his charitable deeds and opened an investigation. As it turns out, practicing cosmetology without a license is a crime.

Since the invention of clippers, parents have cut their children’s hair without the supervision of the nanny state, and children have lived to tell about it.

Other than the emotional trauma caused by an occasional bad haircut, it is hard to imagine what irreparable harm could be done at the hands of an incompetent barber that justifies government intrusion into the task.

But according to the Bureau of Labor Statistics, every single state requires an individual to hold a license in order to work as a barber. That requirement is thinly veiled as a means of promoting societal health and safety.

Depending on one’s state of residence, aspiring barbers are required to complete a mixture of educational or apprenticeship requirements, pass a licensing exam, and pay fees to a licensing board before they can compete for a job with a median wage of $11.40 per hour.

These burdensome requirements not only serve as a barrier to opportunity for would-be barbers, but are now being used as a bludgeon to stop acts of pure charity offered by Montesdeoca and similarly situated do-gooders.

The Arizona State Board of Cosmetology, which is known for its aggressive enforcement of state cosmetology regulations, received an anonymous complaint that tipped them off about Montesdeoca’s makeshift operation.

Even though Montesdeoca was not receiving compensation for his barbering services, he is unlicensed and his act of kindness took place in an unsanctioned venue.

Arizona law makes it illegal for a person to practice cosmetology without a license or operate outside of a licensed salon with only narrow exceptions (AZ Rev Stat § 32-574 [2014]). Violators of the law are guilty of a class 1 misdemeanor, which is punishable by up to six months in jail and a fine up to $2,500.

What’s worse, criminal convictions come with a multitude of collateral consequences, which have the potential to derail Montesdeoca’s career as a barber before it even officially starts.

The board has yet to determine whether it will pursue an enforcement action against Montesdeoca. If it does, a violation of Arizona cosmetology regulations could be grounds for denying Montesdeoca’s application for a cosmetology license, should he apply in the future.

This possibility is concerning to Montesdeoca, who was simply trying to help a vulnerable population he understands all too well. At the very least, Montesdeoca can take solace in the fact that he is in good company: A 90-year-old Florida pastor recently faced criminal charges for providing free food to the homeless in Fort Lauderdale.

Donna Aune, executive director of the board, noted that using an unlicensed barber outside of a licensed salon poses a “real risk” to the public. Aune ignores, however, the fact that homeless people do not have the financial wherewithal to walk into a salon and pay a licensed professional for a traditional haircut.

Instead of criminalizing Montesdeoca’s compassion, this investigation should prompt scrutiny into whether there is a need for the government to license barbers in the first place.

According to a 2015 White House study, the percentage of American workers who must hold a government license to ply their trade has increased fivefold since 1950, from 5 percent to 25 percent. Most of this increase is the result of state expansions of licensing requirements into new professions, rather than shifts in employment trends toward occupations that have traditionally needed licenses.

As Paul Larkin, a Heritage Foundation senior legal research fellow, has previously written, this explosion in licensure requirements is “just another form of crony capitalism, and the public is the loser.”

State boards dominated by licensed practitioners use their power to limit competition and raise prices on consumers, thus disproportionality harming members of society who are in the most financial need.

Adding the threat of a criminal conviction for violating a licensure requirement only increases the level of government intrusion into what would otherwise be a private service transaction between individuals, and contributes to the problem of overcriminalization.

Attempts to compel compliance with regulatory objectives, and to punish every mistake in society through the criminal law and penalties, are especially unwise and unnecessary when there are pre-existing and adequate civil remedies to address the conduct.

For most people, the difference between a bad haircut and a good haircut is a few days. If a more serious injury results from an errant clip, snip, or shave, the courthouse doors are open for all manner of civil injury lawsuits, and the world is full of lawyers raring to sue for millions.

States like Arizona would be well-served by eliminating reliance on criminal regulations to police unlicensed lemonade stands, home cooks, and now barbering do-gooders—all to the detriment of freedom, opportunity, and prosperity for people like Montesdeoca and the homeless around Tucson’s Santa Rita Park.