The Real Crime in the Michael Flynn Saga 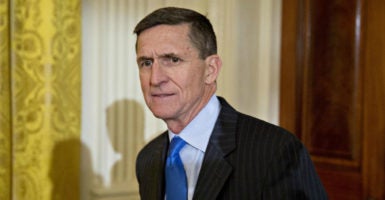 Washington is abuzz with the saga of former national security adviser Michael Flynn’s resignation, the Russia connection, and the melodrama of who knew what, when, and what they did about it.

There are, to be sure, myriad aspects of this story that will consume the media, the Hill, civil society, and the like for a while.

We want to highlight one—and only one—serious aspect of this story that has been underreported: the unauthorized (and criminal) leaks of highly classified information to the media by a person or persons in the government.

We will not weigh in on the panoply of issues related but not limited to the role of the White House counsel and his discussions with then-acting Attorney General Sally Yates, Russian hacking of the Democratic National Committee, the communications that Trump campaign operatives may have had with Russians before the election, or the proper role of Congress or the press going forward.

It goes without saying that Flynn had a duty to be honest with Vice President Mike Pence about what he discussed with the Russian ambassador, and whether the issue of U.S. sanctions against Russia was any part of those conversations.

Regardless of whether you think President Donald Trump should have asked for Flynn’s resignation, the president had the right to ask him to resign. But not telling the truth to the vice president is not a crime under these circumstances.

With respect to the leaks, what we have so far are allegations from anonymous government sources about what was supposedly said in the conversation between Flynn and the Russian ambassador. The transcript is not public yet, so we don’t really know the content, context, or circumstances of the conversations.

Perhaps these sources who refuse to go on the record are being 100 percent accurate about what was said—but without the actual transcript, we don’t really know.

It is one thing to assume it is happening, but not know for sure. It is entirely another thing to illegally disclose the fact that we have been recording the calls of the Russian ambassador and other top Russian personnel.

Alerting the Russians about our lawful surveillance of them—during an ongoing investigation—for the purpose of knee-capping Flynn is inexcusable. As Pulitzer Prize winner Charlie Savage of The New York Times wrote in his book, “Power Wars: Inside Obama’s Post 9/11 Presidency”: “There have always been unauthorized disclosures of information to the news media. It’s how Washington works and has always worked.”

But compared to the nine major leak cases highlighted in Savage’s book (Shamai Leibowitz, Thomas Drake, Chelsea Manning, Stephen Kim, Jeffrey Sterling, John Kiriakou, Edward Snowden, Donald Sachtleben, and David Petraeus), where none of the leakers disclosed classified information for the purpose of targeting one senior government official, these leaks were designed to do exactly that.

Savage opposes the criminalization of unauthorized disclosures because they are a “counterforce against overclassification.” But he also admits that “there can be ‘bad leaks,’ the disclosure of information whose publication may impose social costs that outweigh its social benefits.”

Ask yourself this: Was it better to keep the Russians guessing about what we had on them during the government’s investigation, or was it more important to let them know what we were doing, and how we were doing it, in order to embarrass Flynn?

What we can say with some confidence is that the motivations behind these leaks seem to be purely political and were specifically aimed at bringing down Flynn.

In doing so, the leakers were willing to compromise the national security of the nation by telling the media that we were successfully listening to the phone calls of the Russian ambassador to the United States, and other Russians, in connection with Russian hacking of the Democratic National Committee.

Could Flynn Be Prosecuted?

Some have suggested Flynn may have violated the Logan Act—the 1799 act that was designed to prevent private citizens from specifically engaging in “any correspondence or intercourse with any foreign government or any officer or agent thereof, with intent to influence the measures or conduct of any foreign government … in relation to any disputes or controversies with the United States.”

No one has ever been prosecuted under that act (18 U.S.C. §953), which has been roundly (and rightly) criticized by distinguished legal scholars from the left and the right as a content-based restriction on First Amendment rights under the U.S. Constitution.

Keep in mind that this law was passed just a year after the Alien and Sedition Acts.

The Sedition Act of 1798 is probably one of the worst violations of the First Amendment ever passed by Congress. The Logan Act follows pretty closely behind the Sedition Act in its basic abrogation of First Amendment rights and has never been used against the many Americans who may have technically violated it.

A 2015 Congressional Research Service report details the problems with the act, although it neglects to mention the specific intent requirement in its analysis.

Again, we don’t really know what Flynn said to the Russians as a private citizen, but whatever it was—regardless of whether one thinks it was prudent to do so or not—there is almost zero probability of a successful prosecution under the Logan Act, given its constitutional infirmities.

As Susan Hennessey and Helen Murillo detail in a blog post on lawfareblog.com, the administration has a host of criminal statutes to use against the leakers, including the Espionage Act of 1917, codified at 18 U.S. C. § 793, which prohibits the improper accessing, handling, or transmitting of “information respecting the national defense” with the intent of injuring the United States or aiding a foreign nation.

Another related statute, 18 U.S.C. § 798, prohibits the disclosure of classified information, including information “concerning the communication intelligence activities of the United States or any foreign government.”

As Hennessey and Murillo also note, government employees in sensitive posts are required to sign nondisclosure agreements, a violation of which can expose the leakers to legal action.

No doubt, there are various aspects of this saga that can and will be investigated by the media and the Congress. But the deliberate, orchestrated, and criminal leaks in this case must be investigated. And the leakers must be held to account.