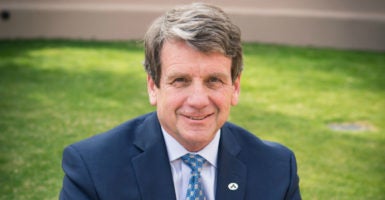 “I am the guy that runs to the fight.”

Farris has been named the new president, CEO, and general counsel of Alliance Defending Freedom, a legal defense organization launched in 1994 that works to safeguard religious freedom, the sanctity of life, and marriage and family, according to its website.

Farris is no stranger to working for conservative causes. He was the founding president of both the Home School Legal Defense Association, a homeschooling advocate, and Patrick Henry College, a Christian college that promotes classical education.

Former Attorney General Edwin Meese III says he is “excited” about what Farris will do at ADF.

“He has done an outstanding job for the homeschool movement and education,” Meese, who serves as the Ronald Reagan distinguished fellow emeritus at The Heritage Foundation, told The Daily Signal in a phone interview. “As an educator and an innovator, he has been in the forefront of the successes in conservatism and building a civil society.” As president of ADF, Farris says he will defend religious liberty, something over time he had become “more and more concerned about.”

Farris has used his law degree to serve as a constitutional appellate litigator. He has argued before the Supreme Court, eight federal circuit courts, and appellate courts in 13 states.

ADF also represented Barronelle Stutzman’s case at the Washington Supreme Court. She is the owner of a flower shop in Washington state and is facing fines for violating Washington’s anti-discrimination law by declining to provide flowers for a gay wedding.

The organization has additionally represented Kelvin Cochran, a fire chief who said he was dismissed from his job because of his faith. Cochran had written a religious book that included his beliefs about sexual morality.

“Alliance Defending Freedom is leading the fight to ensure that Americans remain free to live their faith, not just inside a church or on holy days, but in all aspects of life, including at work, school, and in the public square,” said Jim DeMint, a former South Carolina senator who now serves as the president of The Heritage Foundation.

‘Sitting Silently on the Sidelines … a Bad Idea’

Early in life, Farris developed the belief that he needed to be involved in preserving America’s traditional values.

“I read some articles about the start of the Moral Majority,” Farris said. “And I was very interested in that and really got involved in those days. I saw the evangelical Christians that I had grown up with sitting silently on the sidelines and I knew that was a bad idea.”

Farris graduated from Western Washington University in 1973 with a political science major and received his law degree from Gonzaga University in Spokane, Washington, in 1976.

He then moved to the District of Columbia in 1982 to help open the office for Concerned Women for America, an organization that has become the nation’s largest public policy women’s organization.

It was through Farris’ work for Beverly LaHaye, the founder of Concerned Women for America, that he became inspired to start the Home School Legal Defense Association, a “nonprofit ministry to defend and advance the constitutional right of parents to direct the education of their children and to protect family freedoms.”

“When I was working for Concerned Women for America, the LaHayes had a television program for awhile and I was there with them at the studio,” Farris said. “One of the episodes was a guy talking about homeschooling. He cornered me … into homeschooling.”

Farris said that he went home to talk to his wife, Vickie, about the possibility of homeschooling their children.

She agreed, and the couple spent over three decades teaching their 10 children.

“Our youngest now is at [the] University of Virginia getting a physics degree, [and] his next older brother is at Notre Dame getting a Ph.D. in biochemistry,” Farris said.

Had it not been for his decision to homeschool, Farris said he would likely not have started the Home School Legal Defense Association in 1983.

“We started homeschooling, and given what I was doing in the public policy and religious liberty world, I started getting a lot of calls from homeschoolers,” Farris said.

He founded the Home School Legal Defense Association to help unite homeschool families and offer them legal services and a supportive community, anticipating it would work “like a teacher’s union for homeschoolers—that, if they came and attacked one of us, that the whole movement would stand up and fight back.”

‘A Great Coach and Teacher’

As Farris built a community of advocates for homeschoolers, parents began to ask him to recommend Christian colleges with high standards for their children.

Not only did parents want a faith-based institution to send their children to, but they also wanted a college that would be intellectually stimulating with a focus on a classical education.

Farris sought to meet that demand by founding Patrick Henry College in 2000.

“Michael Farris was a great coach and teacher,” Megan Compton, a 2015 graduate of Patrick Henry College, told The Daily Signal in a statement.

“He led the school well and whenever he was on campus, he always took time to eat lunch with the students,” Compton said.

Scott said Farris’ past has equipped him for his new role.

“Michael has said that he has come here to win, and everything about what he has already accomplished indicates that he is [a] leader more than able to follow through,” Scott said.

Heritage Foundation’s DeMint is also optimistic about what Farris can do.

“ADF is a true American treasure and under the leadership of Michael Farris, it will continue to be an indispensable legal advocacy organization securing victories for our first freedom, as well as the sanctity of life, marriage, and families,” he said.

Farris said he will do all he can to protect religious liberty in his new position.

“When I was approached about applying for ADF …  I just said, ‘I want to do what I can do to save our religious freedom,’” he said. “And leading ADF was about the best possible option to do that.”