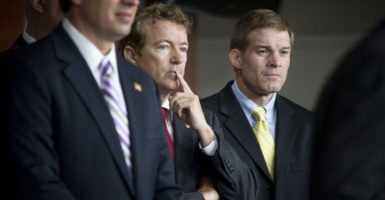 Sen. Rand Paul, R-Ky., left, and Rep. Jim Jordan, R-Ohio, right, were among the conservative lawmakers who spoke out in favor of a new Obamacare replacement plan. Authored by Paul, the legislation was introduced in the House and Senate. (Photo: Louie Palu/ZUMAPRESS/Newscom)

Sen. Rand Paul, R-Ky., and Rep. Mark Sanford, R-S.C., introduced a bill to replace Obamacare on Wednesday, increasing the pressure on GOP leaders who continue to discuss moving the law’s replacement at the same time as its repeal.

The legislation already has the full support of the House Freedom Caucus, a group of roughly 40 of the lower chamber’s conservative members. Conservatives in both the House and Senate have said they want to see repeal efforts move faster, and the lawmakers are hoping that the legislation is a turning point in the repeal-and-replace debate.

“We’re excited about the fact that it will finally be able to address many of the concerns that we’re hearing, whether it’s at town halls or personal calls from our constituents about pre-existing conditions, about how to empower the consumer in terms of their health care choice, and ultimately drive down the price of health care,” House Freedom Caucus Chairman Mark Meadows, R-N.C., said Wednesday.

Called the Obamacare Replacement Act, the legislation shares the hallmarks of other GOP replacement plans, and Paul said it was a “consensus bill” that pulled aspects of other proposals together.

However, the lawmakers acknowledged that there are still components that Republicans disagree on, like whether a replacement should include a refundable tax credit—Paul and Sanford’s does not—and whether to keep Obamacare’s Medicaid expansion.

The Obamacare Replacement Act also creates a $5,000 tax credit for those who contribute to a HSA, and prohibits consumers from using the money in their accounts to pay for elective abortions.

Under Paul and Sanford’s bill, consumers who don’t receive insurance through their employers can deduct the cost of premiums from their taxable incomes, which serves to equalize the tax treatment for individuals and employers.

Additionally, the legislation allows individuals and small businesses to band together through membership in an Association Health Plan to buy health insurance. Paul and Sanford said these pooling mechanisms will decrease costs for consumers.

The bill also allows insurance companies to sell policies across state lines and eliminates Obamacare’s essential health benefits mandate, which is a list of services insurance plans are required to cover without cost-sharing.

A major question that has emerged during the debate over Obamacare replacement plans is whether any new proposal will require insurers to provide coverage to consumers with pre-existing conditions, as the Affordable Care Act did.

Sanford and Paul’s plan would preserve that protection, so long as those with pre-existing conditions maintain continuous coverage.

Conservatives are beginning to grow antsy over the lack of progress on Obamacare’s repeal.

On Monday night, the House Freedom Caucus unanimously voted to support legislation undoing the health care law that passed the House and the Senate in 2015, a move that could force Republican leaders to use that bill as the floor for future repeal bills or risk losing the group’s support.

The 2015 bill repealed the individual and employer mandates, ended the subsidies and Medicaid expansion, and rolled back all of the law’s taxes.

Both Paul and Sanford have said that the 2015 bill should be the starting point for negotiations on which parts of Obamacare to unwind, and the conservatives are urging House leadership to advance repeal of the health care law at a faster rate than they currently are moving.