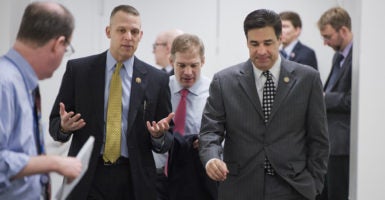 Republican Reps. Scott Perry of Pennsylvania, left, Jim Jordan of Ohio, middle, and Raul Labrador of Idaho, right, are all members of the House Freedom Caucus. The group voted to back a plan to bring a 2015 bill repealing major parts of Obamacare before members again for a vote. (Photo: Tom Williams/CQ Roll Call/Newscom)

Conservatives in the House are drawing a hard line with party leadership on what legislation repealing Obamacare they’ll support and making it clear they won’t accept anything less than a bill dismantling the health care law that passed last year.

“The commitment for Republicans in 2010, 2012, 2014, 2016 has been repeal and replace, not repeal and renege, and repeal means that it’s a repeal,” Rep. Warren Davidson, R-Ohio, told reporters at a monthly event on Capitol Hill on Tuesday. “There are no Affordable Care Act plans. There’s no ‘if you like your Obamacare you can keep your Obamacare’ in the Republican commitment.”

“It should carry today, and that’s a question for the Senate if somehow there’s a lack of will to do what they’ve already done,” he continued.

Republicans are currently in the midst of debating which parts of Obamacare should be repealed, with conservatives splitting from more moderate members of the party.

On Monday night, the roughly 40-member House Freedom Caucus unanimously voted to back a plan to bring a 2015 bill repealing major parts of Obamacare before members again for a vote.

That legislation repealed the individual and employer mandates, the law’s taxes, subsidies, and Medicaid expansion. It also stripped the government of its authority to run the exchanges, and defunded Planned Parenthood.

The repeal bill crafted in 2015 passed both the House and the Senate, but President Barack Obama vetoed it.

But with Republicans now in control of the White House, conservatives are emboldening their colleagues—many of whom voted in favor of the 2015 bill—to put that same legislation on President Donald Trump’s desk.

And they’re not going easy on their fellow Republicans.

“Members of Congress are scared all the time,” Rep. Raúl Labrador, R-Idaho, told reporters. “They need to actually just lean in, move forward, and do what they told the American people they were going to do.”

Conservatives like Labrador have long maintained the position that they must repeal as much of Obamacare as possible—a campaign promise they say has resonated with voters since the 2010 midterm elections.

But now, some of their colleagues are approaching an undoing of the law with trepidation and are opting for repairing, not repealing, the law.

Members of the Freedom Caucus have met with some of their Senate colleagues like Sen. Bill Cassidy of Louisiana to discuss Obamacare’s repeal, and Jordan said their appeal to those who want to unwind less than what the 2015 bill did is simple.

For Republican members who may be waffling on Obamacare repeal, turning to instead repair the law, Labrador had a warning.

“Something that Republicans need to be concerned about is if we’re just going to repeal Obamacare with ‘Obamacare lite,’ then it begs the question: Were we just against Obamacare because it was proposed by Democrats? And if that’s our position, then we’re very hypocritical. Then we really were just taking a political position, not a policy-based position,” he said.

“If we’re going to come back with something that does exactly the same thing as Obamacare but change a couple of things, and just call it Trumpcare or Ryancare, then what was our fight about for the last six years?” Labrador continued.

At a press conference Tuesday morning, House Speaker Paul Ryan and members of the GOP leadership team reaffirmed their commitment to repealing, not repairing, Obamacare, but there are still major differences among Republicans in the House and Senate on what to undo and what to include in the repeal bill.

.@SpeakerRyan on #Obamacare: "This law is in a collapse, and we have an obligation to rescue people from that collapse." pic.twitter.com/nxdqsjKV2w

While conservatives are looking to the 2015 bill to serve as a starting point for negotiations, Republican senators like Cassidy and Susan Collins of Maine believe Congress should wait to repeal Obamacare’s taxes, which were included in the previous legislation.

Additionally, Republican leaders have said they want to include parts of a replacement—tax credits, expansion of health savings accounts, and creation of high-risk pools—in the legislation repealing the bill.

Last week, though, Sen. Mike Lee, R-Utah, said grouping the two together is a “horrible idea.”

Members of the Freedom Caucus, however, haven’t explicitly ruled out including aspects of a replacement in a repeal bill, so long as the 2015 legislation serves as the starting point for negotiations.

Still, conservatives in both chambers are in agreement that the 2015 plan should serve as the floor for the upcoming repeal legislation, and the comments from the lawmakers put further pressure on Republican leaders.

If House leadership puts a bill before its members that repeals less of Obamacare than the 2015 legislation did, then members of the Freedom Caucus said they’ll oppose it.

The repeal bill in the House needs 218 votes to pass, and without the support of the more than 40 members of the group, the legislation fails.

Similarly, GOP Sens. Ted Cruz of Texas, Marco Rubio of Florida, and Lee sent a letter to Senate leaders last month notifying them that the same 2015 legislation should be used as the floor for future repeal legislation.

Sen. Rand Paul, R-Ky., echoed that statement Tuesday, telling Axios that the 2015 bill should be “the minimum that we do … no less.”

The GOP holds 52 seats in the Senate, and Republicans can’t lose more than two votes on the reconciliation bill, which passes with 51 votes.

If Senate leaders put a bill repealing less of Obamacare than the last bill did, they could lose the support of Paul, Rubio, Cruz, and Lee, which would kill the bill.