No, Elizabeth Warren Is Not a Feminist Icon 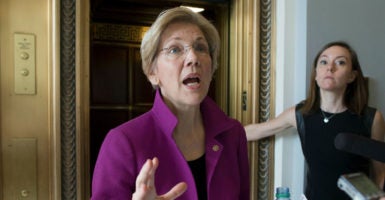 Sen. Elizabeth Warren, D-Mass., is being celebrated by the far left for taking to the Senate floor to insult one of her colleagues, breaking a long-established rule. (Photo: Michael Reynolds /EPA/Newscom)

What did she do? Did she lay down in the street to protect the voting rights of women? Did she take a stand against sex trafficking and female exploitation?

No. She knowingly and flagrantly broke a long-standing rule of the Senate. And for this, the left made her a hero.

The rule that Warren broke was Section 2 of Rule 19, a century-old prohibition on senators from attributing conduct or motives “unworthy or unbecoming” to another senator.

If applied, it requires the offending senator to “take his (or her) seat,” meaning they cannot speak for the remainder of the debate.

When Warren came to the floor to speak against the nomination of Sen. Jeff Sessions, R-Ala., for attorney general, she embarked on a floor speech that painted Sessions—still her colleague in the Senate—as an unhinged racist.

Several minutes into her remarks, Warren called Sessions “a disgrace to the Justice Department” and stated that “he should withdraw his nomination and resign his position.”

It was this statement—not the reading of the letter from Coretta Scott King, as the media has repeatedly reported—which triggered the chair to warn Warren that she was dangerously close to violating the tenets of Rule 19.

Warren was either unmoved or confused about the rules of the Senate, because she continued to slander Sessions, stating that “he has used the awesome power of his office to chill the free exercise of the vote by black citizens.”

While Warren was referencing a statement from King, she was not quoting from it. (And furthermore, this claim against Sessions has been repeatedly debunked.)

Warren’s wanton and blatant disregard of the Senate’s standing rules is what triggered the application of Rule 19. Warren promptly appealed, but the Senate, by a vote of 49-43, determined that the rule had been correctly applied.

Meanwhile, the left was at work making a martyr of Warren for her deliberate disregard for the rules of the institution in which she serves. The hashtag #ShePersisted popped up within minutes—a reference to Senate Majority Leader Mitch McConnell’s comment that Warren had been warned, but persisted in violation of the rules.

Feminists on Twitter fomented outrage that Warren had been “silenced,” that she had been shut down by the Senate patriarchy, that this was somehow representative of the struggle of women everywhere to be heard.

For her part, Warren stood outside the Senate chamber, bravely reading the statement that ran afoul of Senate rules, and then promptly called in to MSNBC to claim she’d been “red carded” in the Senate.

The left fell over themselves in martyrdom ecstasy. Such bravery, such courage, such resistance in the face of deep institutional oppression. (Not to be left out, even Hillary Clinton got in on the drama.)

“She was warned. She was given an explanation. Nevertheless, she persisted.”

The problem here, in case anyone hasn’t noticed yet, is that this “Elizabeth Warren, Feminist Hero, Courageous Victim” narrative is completely misplaced.

And for that, she’s a feminist icon? Please, spare me.

Raising Warren up as a hero of feminism because she knowingly broke a gender-neutral Senate rule not only belittles the actual achievements of feminist heroes like Alice Paul, Sojourner Truth, Shirley Chisholm, Elizabeth Cady Stanton, and Susan B. Anthony, it relegates women—again—to the status of victims, which they are most certainly not.

This is the problem with the left’s narrative about women. In seeking to make martyrs out of women like Warren (and Clinton, for that matter), they implicitly sell women on the idea that they are still kept down, still oppressed by the insidious forces of patriarchy in a society that’s set against them.

This isn’t an empowering philosophy. It’s a degrading one.

Women have made incredible strides in the face of tremendous odds. And because we have had true feminist heroes that have triumphed in the face of real oppression, we live in a time where women are Cabinet secretaries, CEOs of major corporations, senators, presidential contenders, leaders in their fields—even outnumbering men at universities.

Why does the left continue to tell women that they are still victims? This shamefully dismisses the accomplishments of women generations over who have sacrificed everything to create a society in which women are promoted for their accomplishments, and recognized for their achievements, rather than their gender.

Do women continue to face difficulties in modern society? Yes. Discrimination, exploitation, and harassment are very real issues faced by women across America, and ones that deserve very real attention.

But does what Warren faced in the Senate rise to that level? No. Profoundly, no.

For the left to equate the two—to make Warren a martyr to a belief that women are somehow still the most victimized class in society—is a shameful attempt to make women believe they still can’t reach the top tiers of society, that they’ll always be fighting some nebulous, unidentified patriarchal conspiracy designed to silence them, instead of pouring their energies into pursuing their dreams.

Warren consciously broke a 100-year-old Senate rule. A true feminist—one who prizes being treated equally regardless of gender—would own up to the issue and accept the consequences like every other member of the Senate, not wave the flag of victimhood in the face of American women who continue to achieve, break barriers, and reach the heights of their potential every single day.