We Hear You: From Obamacare to Affordability and Choice for Consumers 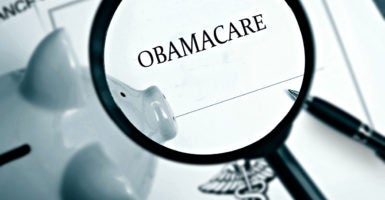 Editor’s note: We’re hearing from so many enthusiastic members of The Daily Signal’s audience that we decided to begin running some of your correspondence. Here’s a batch on the topic of Obamacare. You’ll find our address below. —Ken McIntyre

Dear Daily Signal: Thank you for Elizabeth Fender’s data-filled article on the Obamacare approval ratings over time. I appreciate your truthful reporting of the facts, and your citing the specific data and your sources (“Obamacare May Soon Be Over. Here’s What Americans Have Thought of the Law Since 2010”).

In addition to the reasons you cite for Obamacare’s low approval ratings (narrow networks, high and rising health care premiums), there are several others.

These include religious liberty violations: the contraceptives mandate on employers by the Department of Health and Human Services (source of two Supreme Court challenges and hundreds of lawsuits); abortion and Planned Parenthood funding; Independent Payment Advisory Board “death panels” (someone wouldn’t be able to use his own money to save his own life); and the government’s definition of “religious entity.” Last but not least is the Supreme Court ruling on gay marriage, which affects administration of health care benefits.

The Obamacare regulations seem to have completely ignored the serious comments advising the government to stop, slow down, make major changes. The contraceptives mandate and transgender mandate are huge mistakes, ignoring the science that shows that the premises upon which these mandates are based are faulty.

I am hopeful the Trump administration will work more collaboratively with key stakeholders in our health care system, including Catholic health care providers. The larger Judeo-Christian health care delivery system deserves to be treated as the large stakeholder that it is.

As the new administration moves into office and into power, we still can attempt to be peacemakers. We can honor the goal of the Affordable Care Act—to create a health care system that provides affordable care and expands access. This is a worthy goal.

People who have preexisting conditions need to have some form of health care insurance. Theoretically, there should not be an “uninsurable” person. These are some of the areas where insurance companies can focus to create new products and services. I believe they would respond appropriately. My experience with the industry supports the fact that they have far more goodness than they are given credit for.

We can honor one administration for their work as we move forward with the next administration’s agenda—as determined by the voters who put them there. —Kathleen Goryl

Dear Daily Signal: I just read your piece about Obamacare and its effect on an owner of an International House of Pancakes franchise (“Obamacare a Factor in IHOP Owner’s Decision to Sell His 16 Restaurants”). Your mentioning Utica, New York, jumped out at me. I live just north of Utica in Remsen, home of Olympic luger Erin Hamlin.

I loved your piece because it made the news very personal. So much of the debate on health care is numbers about “millions of people covered.” This showed what happened to an employer who was trying to do right by his employees, not to a number of people.

Sorting Out Plans to Replace Obamacare

Dear Daily Signal: I think that there is merit to each of the Obamacare replacement plans, and lawmakers need to sort it out and commit to one (“A Look at 4 of the GOP’s Obamacare Replacement Plans”).

However, I have never favored health care support for grown people age 21 and up. Why should taxpayers support these adults and/or subsidize their parents who choose to do so? —David Cromer

Choosing Between Mortgage and Health Premiums

Dear Daily Signal: I’m writing about the repeal of Obamacare and its consequences (“What Happens for Consumers After Congress Repeals Obamacare”). My son is paying over $1,200 per month for a family health insurance plan, and he has lost his primary job.

His family can’t qualify for subsidies because they still make too much with part-time jobs. But they will have trouble between choosing to pay the mortgage or health premiums. He’s no congressman! —Susan Peed

Dear Daily Signal: I know from personal experience that the Affordable Care and Patient Protection Act doesn’t contain enough to protect patients. Obamacare should have included where to file comments, suggestions, and complaints about your care. This would help pinpoint what and where the problems are. I find filing with the state to be useless.

My five-day nightmare stay at a hospital revealed what I consider serious problems. I had requested my hospital records three different times within a half-year, but the hospital claimed the records were not complete. After the two-year limitation to sue them, they finally gave me my “records.”

The records were not what I expected. There was no timeline of services provided, treatments, doctors’ assessments, medications, or the amounts. Being sued by the hospital for unpaid bills (some for services I didn’t request), I requested my records from the hospital lawyers. They sent me a list of the charges instead.

I was shocked at the number of drugs I was given—over 40, eight of which were for pain. I was given eight doses of morphine in a four-day period. All of those drugs and the amounts should have been in my records in a timeline, along with things like blood pressure and temperature checks.

Medical records in a timeline would help keep communications open between doctors and nurses, reduce unnecessary treatments and services, help keep the patient from being overmedicated, and give patients and health insurance companies better oversight. Do you know what’s in your medical records?  —Gary Kujat

Want to sound off regarding our coverage? Write to The Daily Signal via [email protected] All letters are subject to editing for length, clarity, and style.