Sean Spicer Knows the Importance of Religious Liberty. Now Trump Should Act to Secure It. 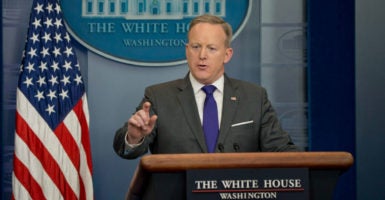 In a press conference last Thursday, White House press secretary Sean Spicer was asked about a draft executive order on religious freedom and the president’s thoughts on the topic more generally.

His response was excellent.

After the Obama administration tried for years to reduce religious freedom to “freedom of worship,” Spicer’s robust defense of free exercise was a breath of fresh air.

It showcased a return to the true understanding of religious freedom as the ability to not just believe, but live in accordance with one’s beliefs every day of the week, and in all walks of life.

In his comments, Spicer emphasized the importance of being able to freely live by one’s faith:

The president and the vice president both understand that one of the things that makes our country and this democracy so great is our ability to express our religion, to believe in faith, to express it, and to live by it. And that’s, I think, where the important part is whether it is a small business owner or an employee who wants to have some degree of expression of faith at the company.

Spicer’s comments show that he recognizes the difficulty that real Americans have faced in seeking to live according to their beliefs.

Just consider some recent cases. A high school football coach lost his job because he prayed on the field. An Atlanta fire chief was fired for writing a book for his church’s Bible study. A Washington florist is facing the loss of her business and house because she declined to make flower arrangements for a same-sex wedding.

Religious liberty is an issue that affects ordinary Americans, and Spicer’s remarks prove he understands that.

The use of “reprisal” here is important.

The religious freedom protections we need today are simply shields from government discrimination directed at people of faith. They are not swords to be used against others because they don’t take away anything from anyone, LGBT or otherwise.

This includes the prospect, acknowledged by President Barack Obama’s solicitor general, of the IRS revoking the nonprofit tax status of religious institutions that live out their beliefs in man-woman marriage or that human beings are created male and female.

These threats of reprisal are what animated the introduction of the First Amendment Defense Act, which Trump has repeatedly pledged to sign if passed by Congress.

Spicer was challenged to give specific examples of assaults on religious freedom, and without hesitation he responded:

Look back to the Little Sisters [of the Poor] case … look back to other businesses that were under Obamacare … those are instances where clearly the pendulum is swinging a different way, where you are not carving out institutions or the ability for privately-held businesses to conduct themselves to live according to their faith or their moral compass.

Spicer zoomed in on the Department of Health and Human Services’ contraceptive mandate for good reason—the Supreme Court has twice rejected the government’s attempts to force institutions and business owners to violate their faith by cooperating in the provision of abortion-inducing drugs and devices.

But it doesn’t stop there. According to Spicer,

There’s clearly a lot of evidence in the last couple years of the government coming in with regulations and policies that have frankly denied people the ability to live according to their faith … We shouldn’t penalize people or mandate them to abide by certain policies or regulations which are in direct contradiction to their faith.

Spicer is correct. Government regulations violating religious freedom have abounded in the last few years, many of them dealing with issues of abortion, marriage, and gender identity.

It is time for Trump to do something to address that.

As Ryan Anderson, my colleague at The Heritage Foundation, has argued:

Whether it be harassing an order of nuns, forcing doctors to perform sex reassignment therapies, or preventing local schools from finding win-win compromise solutions that would respect all students’ bodily privacy, the Obama administration waged an aggressive and unnecessary culture war.

Because it has done so almost exclusively through executive action, a Trump administration can quickly undo this damage. And Congress can then ratify it permanently in law.

In his comments, Spicer referenced the case of the Little Sisters of the Poor, an order of Catholic nuns who care for the elderly poor. Nuns with Little Sisters of the Poor walk outside the ground of the Supreme Court after arguments were heard in Zubik v. Burwell, March 23, 2016. (Photo: Joshua Roberts/Reuters/Newscom)

These sisters have been enmeshed in legal battles since the Department of Health and Human Services mandated that they violate their religious beliefs through involvement in providing contraception abortifacients to their employees.

Now, the sisters await a resolution—which the draft Trump executive order would provide.

Sister Constance Veit recently spoke with The Daily Signal, saying that a possible executive order from Trump “is a very hopeful sign that things could be coming to an end” in their legal battle with the government.

Until then, the sisters will continue as usual: “We’ll just keep praying, and keep going about our daily lives … and hope that one way or another, our time in the limelight is coming to an end.”

Spicer’s comments show a level of understanding and sophistication on the topic of religious liberty that is very encouraging for those whose rights have been violated over the last eight years.

Now is the time for the president to fulfill the promise he made at the National Prayer Breakfast that his administration “will do everything in its power to defend and protect religious liberty.”

Now is the time to put words into action and sign the executive order so the Little Sisters and Americans of all faiths can once again live out their beliefs without fear of federal government reprisal.