Why Delaying Obamacare Repeal Is Hurting the American People 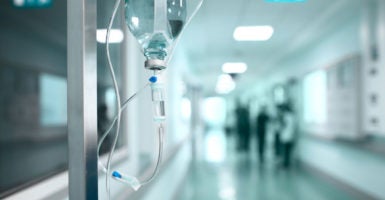 Republicans in Congress have campaigned for seven years on the promise of repealing Obamacare. (Photo: iStock Photos)

When President Donald Trump took office, repeal of Obamacare seemed like a guarantee—and then the timeline started slipping.

All the elements are in place: A Republican-controlled Congress and a Republican president, all elected after promising to repeal Obamacare. But once the celebration and ceremonies died away, Congress started to do what it does best. Nothing.

“Nothing” may be a bit strong given the historic levels of obstruction from Democrats in the Senate, but House Republicans have no such excuse. In fact, they even have a blueprint.

Last year, the House and Senate passed an Obamacare repeal using the budget reconciliation process. That measure was ultimately vetoed by then-President Barack Obama, but that same legislation can be reintroduced and sent to Trump’s desk to be signed into law.

There is no reason to delay. The slipping of the Obamacare repeal timeline is creating cascading problems for the American people.

No one needs reminding that Obamacare takes away choice, erodes the value of health care, and puts additional burden on the pockets of the American taxpayer. The unsustainable nature of Obamacare is creating massive uncertainty and causing insurers to leave the marketplace, causing individual premiums to increase.

Additionally, once repeal is signed into law and real health care reforms begin moving forward, private insurers will need time to adjust to the new market. Continuing to delay repeal shortens the time insurers will be able to adjust and provide the best solution for the insured.

Most importantly, we don’t want Americans living under the current failing health care system any longer.

Obamacare is bad, and only getting worse. Average premiums are going up by 25 percent this year, deductibles are blowing past $10,000 for a family, and 70 percent of U.S. counties have no insurer choice, or a choice between only two insurers.

What good is a health care plan that you can’t choose and can’t afford to use? Congress must repeal it as soon as possible to put better health care choices back in the hands of the American people.

Nearly every single congressional Republican campaigned on the promise to repeal Obamacare. The unfortunate consequence of the delay is that the American people are losing faith in the people whose job it is to represent them.

There is no doubt that lawmakers will be held accountable to their promises.

Delaying Repeal Keeps the Focus Off Other Priorities

In addition to creating a time crunch, the fight over when and how to repeal Obamacare is delaying action on other critical fights.

There is no doubt that Obamacare repeal is and should be the first priority, but Trump and congressional Republicans have made major promises to Americans that must also be considered.

Republicans campaigned on repealing Obamacare in 2010, 2014, and 2016. Now it is time to step up to the plate and use the budget reconciliation process to deliver on those promises.

Congress needs to send a full repeal of Obamacare to the president for his signature. Americans cannot afford any further delays.