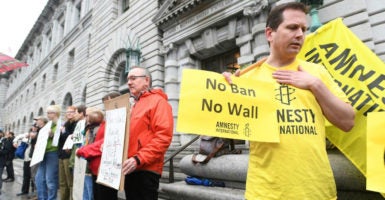 William Butkus and a dozen other protesters of the Trump administration's executive order demonstrate Tuesday outside the 9th Circuit Court of Appeals in San Francisco. (Photo: Noah Berger/Reuters/Newscom)

The lawyer who argued the case for President Donald Trump’s executive order designed to bar terrorists from entering the country is the target of sharp criticism for his performance Tuesday night before a federal appeals court.

“I’m not sure I’m convincing the court,’’ Flentje said out loud at one point in arguing for the executive order temporarily restricting travel to the U.S. from seven terrorism-prone nations.

During the Obama administration, then-Attorney General Eric Holder honored Flentje for helping to draft the legal case for same-sex marriage and for terrorism suspects being held in the Guantanamo Bay detention center, which the administration sought to close.

When the three-judge panel from the 9th Circuit Court of Appeals pressed Flentje for evidence connecting the seven countries to terrorism, he said, “These proceedings have been moving quite fast, and we’re doing the best we can.”

He said the government hadn’t included all the evidence yet. He cited some Somalis in the United States who he said were connected to the al-Shabab terrorist group.

Judge Michelle Friedland asked, “Can you point us to where in the record you are referring?”

Flentje responded: “It is not in the record.”

Flentje delivered a weak argument that likely could affect the outcome of the case, said Hans von Spakovsky, senior legal fellow at The Heritage Foundation.

Justice Department spokeswoman Nicole A. Navas said the department wanted to avoid any conflicts of interest after the former employer of two top Trump administration lawyers filed a brief on behalf of opponents in the suit against the president’s executive order.

The acting solicitor general and acting assistant attorney general “have refrained from signing this brief, out of an abundance of caution, in light of a last-minute filing of an amicus brief by their former law firm,” Navas told The Daily Signal in an emailed statement.

“The department has no additional comment than what was stated in the government’s brief,” she added on the question of why Flentje argued the case in one of the nation’s most liberal circuits.

A federal judge in Seattle on Friday placed a temporary restraining order, or TRO, on enforcement of the week-old executive order. It put a nationwide pause on carrying out the order.

Flentje’s job Tuesday night was to make the legal case for Trump’s order on vetting immigrants from seven Middle Eastern countries that have been terrorism hot spots.

“There was a lot of back and forth in that entire argument,” White House press secretary Sean Spicer said Wednesday in response to a question on Flentje’s presentation and whether Trump was concerned about it.

“I think he did what he had to do to, represent the president’s case and represent the administration’s case on the TRO,” Spicer said of Flentje before adding of Trump:

He feels very confident on the merits. That’s where his focus has been. So I’m not concerned.

I think the president’s main concern has been … making sure that an executive order that was lawfully executed and [went] through the entire process—remember, the DOJ’s Office of Legal Compliance vetted this order and deemed it was legal. So we can follow this entire process to be sure it was done correctly, constitutionally, legally.

Flentje started work at the Justice Department about 19 years ago, under President Bill Clinton. He continued under Presidents George W. Bush and Barack Obama.

Their decisions to remove their names from the most recent brief and from the case itself came after their former employer, the Jones Day law firm, filed an amicus brief against Trump’s executive order. Jones Day also filed a brief seeking to remove the two lawyers from the case, contending their involvement represented a conflict.

Flentje, the special counsel to the assistant attorney general, then became the highest-ranking Justice Department attorney to handle the case.

Interestingly, Jones Day was associated with both the Trump presidential campaign and the Trump transition team. The new president named a former Jones Day lawyer, Don McGahn, as White House counsel, the legal news site Above the Law noted.

The person filing the brief against Trump’s executive order now could pose ethical questions since the Jones Day firm has had such close ties to Trump in the past, von Spakovsky said.

“The opposing brief of the executive order is a very serious conflict,” von Spakovsky said.

In 2013, Holder issued the Attorney General’s Award for Distinguished Service to a team, including Flentje, that made the legal case that the Defense of Marriage Act, a Clinton-era law recognizing marriage as the union of a man and woman, was not constitutional.

In 2010, Holder’s Justice Department honored Flentje and other lawyers with the Attorney General’s Award for Excellence in Furthering the Interests of U.S. National Security. The award was for their work on 240 appeals involving detainees at the Guantanamo Bay prison for terror suspects.