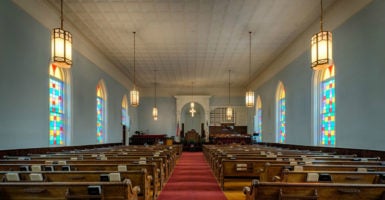 The Free Speech Fairness Act would require the government to stop policing speech in churches that may be considered political. (Photo: iStock Photos)

For more than 60 years, the federal government has been sticking its nose where it doesn’t belong, threatening to punish houses of worship and their leaders for what they say.

The Free Speech Fairness Act was introduced in Congress earlier this week and, if enacted, would go a long way toward ending that.

Ever since 1954, when Congress enacted the Johnson Amendment, the IRS has been telling churches that it has the power to monitor their speech.

Under that law, if pastors or other clergy say anything that (in the government’s opinion) is “on behalf of (or in opposition to) any candidate for public office,” the feds can begin taxing them and potentially bring about their financial ruin.

The history behind that speech-censoring law is not what you might expect.

Most people might assume that it was part of secularists’ relentless efforts to “separate church and state.” But the story that history tells is quite different.

In the 1950s, then-Sen. Lyndon B. Johnson, D-Texas, faced stiff criticism from nonreligious nonprofit organizations. In order to silence their attacks against his future campaigns, he introduced a bill to ban all nonprofit groups from speaking for or against political candidates.

Interestingly enough, churches weren’t even the target of his proposal.

But regardless of Johnson’s intent, houses of worship nevertheless find themselves squarely within that law’s reach. And for well over half a century, they’ve had to continually wonder when their speech on some of the most pressing political issues of the day might trigger IRS scrutiny.

This tramples on the rightful role of churches.

Pastors, priests, and other clergy are called to instruct their congregants in all areas of life. The holy texts of the Abrahamic faiths have implications for everything in life, including politics and how to vote.

As Christian theologian and former Prime Minister of the Netherlands Abraham Kuyper wrote, “There is not a square inch in the whole domain of our human existence over which Christ, who is Sovereign over all, does not cry, ‘Mine!’”

The Johnson Amendment, however, carves out portions of this domain and labels them off-limits for churches unwilling to incur steep financial penalties.

The Johnson Amendment’s scope is sometimes misunderstood. It doesn’t just prohibit clergy from telling congregants who to vote for; it reaches beyond that, threatening to punish all houses of worship for saying anything that the IRS might deem to be in favor of, or in opposition to, a political candidate.

That vague guidance makes it impossible for religious leaders to know what crosses the line and what doesn’t.

Consider these scenarios: What if a pastor states in a sermon that a politician is unfit because his or her personal morality is not in line with the Bible’s teachings? Or what if a rabbi remarks that a politician’s immigration proposals do or do not honor the lessons of his faith’s sacred texts?

It’s not clear whether one, neither, or both of these examples cross the line.

But this we do know—churches and other houses of worship shouldn’t have to worry about this.

The Free Speech Fairness Act would put an end to religious leaders’ playing this guessing game.

It would tell the federal government to stop scrutinizing what churches say about political candidates, and it would lift the muzzles that now cover America’s pulpits on the many issues that often cross into the realm of politics.

Currently, bureaucrats are empowered to monitor pastors’ sermons. What could be a greater governmental intrusion into a church’s operations than that?

By removing a primary basis upon which the IRS inspects what clergy say, the Free Speech Fairness Act would put the government back in its proper place.

Over six decades ago, Texas politician Lyndon Johnson set off a chain of events that invited federal officials to meddle where they didn’t belong. The Free Speech Fairness Act says it’s high time we sent them packing.