Liberals Likely to Use Courts to Thwart Trump Agenda 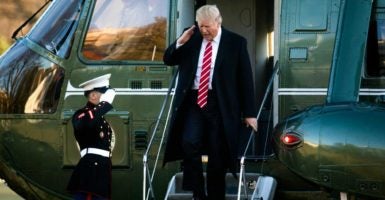 After the president scolded judges for not ruling his way, some critics accused him of seeking to intimidate an independent judiciary.

“If a judge oversteps that constitutional role and acts as a super legislature, then that judge should be criticized,” @HvonSpakovsky says.

That was in 2010, after the State of the Union address when President Barack Obama rebuked the attending Supreme Court justices over the Citizens United free speech and campaign finance case. Some Obama critics also said they felt he was threatening the Supreme Court in 2012 ahead of its ruling on the Obamacare law.

Some legal analysts anticipate the case will be a harbinger of things to come in challenging President Donald Trump’s policies through the courts, as Democrats face diminished power in Congress and could increasingly use the judicial system to block the president’s policies.

Federal courts frequently ruled against Obama’s executive actions during his eight years in office. However, Trump is getting a fast start on clashing with courts after a federal judge in Seattle placed a temporary restraining order nationally on the executive order to restrict immigration from seven Middle Eastern countries that have been designated as terrorist hot spots.

In response to the immigration ruling, Trump tweeted that U.S. District Judge James L. Robart was a “so-called judge,” prompting Democrats such as Senate Minority Leader Charles Schumer of New York to say Trump has a “disdain for an independent judiciary that doesn’t always bend to his wishes.”

Schumer even stretched this criticism into the upcoming Supreme Court nomination debate, claiming the attack on Robart “raises the bar even higher” for the confirmation of Neil Gorsuch over the question of judicial independence.

“That could be a flawed argument because broadly speaking, Gorsuch is probably more skeptical of executive power than Merrick Garland would have been,” said Ilya Shapiro, a senior fellow in constitutional studies at the libertarian Cato Institute, referring to Obama’s nominee to the high court who the Senate did not confirm in 2016.

Shapiro told The Daily Signal in a phone interview he thought Trump’s attack on Robart was inappropriate, but not unheard of.

“It was improper for a president to question the authority of the independent judiciary, but it’s not really different from President Obama calling out the Supreme Court at the State of the Union or in seemingly trying to pressure Justice [John] Roberts on Obamacare,” Shapiro said.

Federal judges should by no means be immune from criticism, said Hans von Spakovsky, a senior legal fellow at The Heritage Foundation. He believes Robart, the Seattle judge, issued a ruling outside the law.

Litigation and “judge shopping” will likely continue throughout the administration as a means to stop Trump’s agenda, von Spakovsky predicted.

This could be a successful strategy for the left, said Curt Levey, a constitutional law expert with the Committee for Justice, a nonprofit legal group, and FreedomWorks, a conservative advocacy group.

With 94 U.S. district courts, it’s possible for liberal advocacy groups to file suits across the country, particularly with issues such as immigration that have a large pool of potential clients, and gain a sweeping national decision out of just one district court decision, Levey told The Daily Signal.

Levey anticipates an increase in environmental groups suing the administration after Obama-era Environmental Protection Agency regulations are rolled back.

“Democrats don’t have a lot of power in Congress, but they still have governors and state attorneys general and many private outside groups,” Levey said. “These outside groups can’t legislate, but they can sue by themselves.”

It was Washington state Attorney General Robert Ferguson who brought the case on behalf of his state against the Trump executive order.

With regards to the pending case on immigration restrictions from the seven Middle Eastern countries, Levey described this as contrasting somewhat with the Obama executive actions.

Typically, he said, the question with Obama executive actions were about whether the president had the constitutional authority to enact them. In the case of Trump, the question at hand is “negative rights,” or an argument about what the government cannot do with regards to individuals.

The U.S. Court of Appeals for the 9th Circuit did not put an emergency stay on the temporary restraining order, as the Trump administration petitioned, thus preserving the district court ruling. The appeals court asked challengers of the immigration restriction to file written arguments by 4 a.m. Monday and asked Justice Department lawyers to reply by 6 p.m. the same day. The court will then schedule a hearing on whether the hold on the policy will remain in place.

Democrats are almost certain to apply this pending case and other potential cases to the confirmation hearing of Gorsuch, currently a 10th Circuit Court of Appeals judge. In his full statement over the weekend, Schumer said:

The president’s attack on Judge James Robart, a [George W.] Bush appointee who passed with 99 votes, shows a disdain for an independent judiciary that doesn’t always bend to his wishes and a continued lack of respect for the Constitution, making it more important that the Supreme Court serve as an independent check on the administration. With each action testing the Constitution, and each personal attack on a judge, President Trump raises the bar even higher for Judge Gorsuch’s nomination to serve on the Supreme Court. His ability to be an independent check will be front and center throughout the confirmation process.

As for intimidating the judiciary, Levey said he isn’t concerned.

“What seems to be getting so much coverage is Trump threatening the judiciary, but if senators pressure Gorsuch to promise to vote for X or he won’t get confirmed, that’s equally a threat from Congress,” Levey said.