How the US Can Work With Pakistan to Help Uproot Terrorism 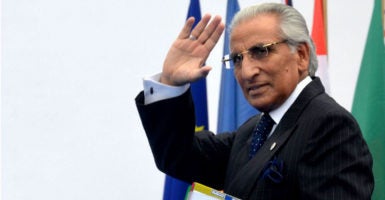 Tariq Fatemi, Pakistan's special assistant to the prime minister on foreign affairs, has stressed that Pakistan should be considered "a serious and credible partner" of Washington. (Photo: Piero Oliosi /Polaris/Newscom)

Is Pakistan getting serious about uprooting Islamist terrorism? There are some encouraging signs of late.

A day before the public release of a think tank report, “A New U.S. Approach to Pakistan: Enforcing Aid Conditions without Cutting Ties”—drafted by Husain Haqqani of the Hudson Institute and myself, with the input of several U.S.-based Pakistan experts—The Washington Post ran a story about Pakistani efforts to get tougher on terrorism.

In the Hudson-Heritage report, Haqqani and I argue that to accomplish U.S. counterterrorism objectives in the South Asia region and to reverse extremist trends in Pakistani society, Pakistani authorities must take a comprehensive approach to shutting down all Islamist militant groups that operate from Pakistani territory, not just those that attack the Pakistani state.

We further state, “There should be no ambiguity that the U.S. considers Pakistan’s strategy of supporting terrorist proxies to achieve regional strategic advantage as a threat to U.S. interests.”

The report includes several policy recommendations for the Trump administration, some of which involve taking risks in an effort to evoke different Pakistani responses.

We fully acknowledge that there is “no silver bullet to change decades of Pakistani policy,” but that “there are some policies that would improve chances of gaining Pakistan’s cooperation in dealing with terrorism in a vital region of the world.”

The Washington Post article notes that Pakistan’s recent house arrest of Lashkar-e-Taiba founder Hafiz Mohammad Saeed signals that Pakistani officials may be concerned about tougher policy toward Pakistan-based terrorists coming down the pike from the new Trump team.

To remind, the Lashkar-e-Taiba (with facilitation by some Pakistani intelligence officials) orchestrated the 2008 Mumbai attacks, which killed 166 people, including six American citizens.

In 2012, the U.S. offered a reward of $10 million for information leading to the arrest and prosecution of Saeed. Tariq Fatemi, Pakistan’s special assistant to the prime minister on foreign affairs, told The Washington Post, “Pakistan is not merely an aspirant for cooperation with Washington, it is a serious and credible partner.”

Fatemi has also said Pakistan is willing to hold negotiations on the possible release of Dr. Shakil Afridi, who helped the CIA track and find Osama bin Laden at his hideout in Abbottabad, Pakistan.

The U.S. Congress and even Hollywood actors have called for the release of Afridi over the last five years. “Zero Dark Thirty” actors Jessica Chastain and Jason Clarke made an appeal for Afridi’s release at the 2013 annual Academy Awards.

If Pakistan continues to take steps to rein in Saeed and the Lashkar-e-Taiba and to move forward with prosecutions of the group’s leaders who were involved in the Mumbai attacks, it will facilitate the resumption of much-needed Indo-Pakistani dialogue.

Military tensions escalated last fall between the nuclear-armed rivals following a major terrorist attack on an Indian military base in Jammu and Kashmir.

During a recent trip to India, which included four days in Indian-controlled Jammu and Kashmir, I heard support for a potential return to Indo-Pakistani dialogue among senior Indian officials, so long as Pakistan reins in militant infiltration across the Line of Control that divides Kashmir.

There was also cautious optimism in India about the prospects for improved Indo-Pakistani ties with the assumption to power of a new Pakistan chief of army, Gen. Qamar Javed Bajwa, and a new director of inter-services intelligence, Lt. Gen. Naveed Mukhtar.

The Trump administration should also take a cautiously positive view of Pakistan’s recent steps on the counterterrorism front and seeming interest in getting off on the right foot with the newly-appointed team in Washington.

It should be clear, however, that Washington remains committed to containing, and eventually eliminating, the international terror threats emanating from Pakistan. Achieving this goal through a cooperative U.S.-Pakistan approach is the preferred, though not the only, U.S. policy option.