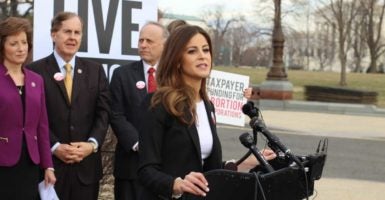 Live Action President Lila Rose is flanked by members of Congress as she addresses the media. (Photo: Caleb Ecarma)

“I hope that the sands of time blow over that Capitol dome before we ever give one more dime of taxpayer dollars to this insidious, deceptive, and evil enterprise,” said Rep. Trent Franks.

“Those of you in the media have had a lot of talk about fake news and alternative facts, and I would just say that, I can think of no organization in the recent history of the world that has deceived the world more than Planned Parenthood,” said Franks.

“The truth is, Planned Parenthood is the largest perpetrator or abortion in America, mercilessly killing some 300,000 human babies every year … and they want taxpayers to be forced to pay for it,” he added.

Planned Parenthood receives annually around half a billion dollars of taxpayer money.

“I have spent my career protecting the health of women, children, and families, but as we see in these investigative videos, Planned Parenthood is not about women’s health care, it’s an abortion enterprise,” Black said.

Black appealed to her fellow members of Congress to follow the voting trends of the American people.

“The mission of this organization is to take life, not provide health care for women and their children … two patients enter their clinics, and only one leaves alive,” Hartzler said.

This article has been corrected. Rep. Jodey Arrington, R-Texas, did not attend the press conference.