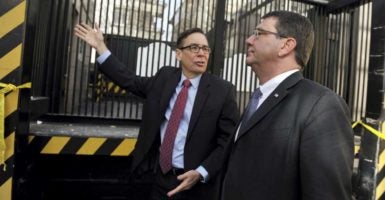 Macedonia has a population smaller than Queens and is roughly the size of Vermont. It is stuck in the southern Balkans, wedged between a hostile Greece and sometimes revanchist Albania and Bulgaria. It is not the center of the universe.

So why are some members of Congress having to ask our Macedonian ambassador, Jess Baily, to explain reports that he’s been acting as the bullying sovereign of the country, shoehorning political parties into forming a “red-green” coalition between leftist and Islamic-based parties?

And is it true, they also want to know, that the ambassador is siphoning off government money to groups founded by the left-wing billionaire activist George Soros?

Members of both the House and the Senate sent their letters to our ambassador in Skopje, that nation’s capital, on Jan. 17 and gave him two weeks to reply. President Barack Obama’s appointee hasn’t responded yet, though after I called the State Department and the embassy to inquire, the State Department did reach out to at least one congressman to tell him a response was being drafted.

But things have gotten so bad that congressional hearings and congressional delegations to the small Balkan country are being contemplated. Members of Congress have also reached out to the new Trump administration to inquire into the matter.

Tony Perkins, the president of the pro-traditional values Family Research Council, has also taken a keen interest in the matter. He wrote this week:

While the U.S. goals for Macedonia include benign statements on investing in democracy, the State Department began favoring partnerships with Soros’ long litany of organizations in 2012. These organizations are anything but democratic. Instead, they are pushing progressive, violent, and radical ideals throughout Europe.”

“Ambassador Baily and his team have been working in partnership with Macedonian authorities as well as with civil society to advance U.S. policy and U.S. goals. The Department of State has full confidence in our embassy and ambassador in Macedonia,” said Toner.

They were also tough, so it’s not easy to see why the State Department and the embassy are dragging things outs.

“Unfortunately, we have heard credible reports that, over the past two years, the U.S. Mission to Macedonia has actively intervened in the party politics of Macedonia, as well as in the shaping of its media environment and civil society, in a manner that consistently favors the parties, media, and civil society groups of the center-left over those of the center-right,” begins the House letter.

They also seek to know whether the embassy under Baily has given preference to leftist media outlets over conservative ones in the disbursement of U.S. aid.

Both letters also ask if it was true that our embassy “selected the Open Society Foundation as the major implementer of USAID (U.S. Agency for International Development) projects in Macedonia?”

The Open Society Foundation is a Soros creation that promotes the billionaire’s progressive ideology worldwide. Macedonian critics charge that since 2012, or two years before Baily’s appointment, USAID has been allocating most of its assistance to the Open Society Institute and nongovernmental organizations run or controlled by Soros. They put the figure at $5 million.

Conservative Macedonian political commentator Cvetin Chilimanov told me by telephone from Skopje Friday that Baily’s aim was to form a coalition government between the former communist Social Democratic Union and two ethnic Albanian parties, one of which, the Besa Movement, has a strong Islamic component and receives backing from Saudi Arabia and Turkey.

In other words, the ambassador is trying to shut out the strongly pro-American, pro-capitalist VMRO-DPMNE coalition, which actually won the most votes in the Dec. 11 elections.

This is an approach many in Skopje hope will change now that another team is in charge in Washington.