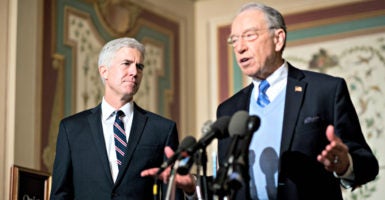 President Donald Trump’s nominee for the Supreme Court could have a say in rulings on religious freedom, transgender bathrooms in schools, and private property rights, if he is confirmed before April 16.

Judge Neil Gorsuch of the U.S. 10th Circuit Court of Appeals met with Senate Majority Leader Mitch McConnell, R-Ky., and other senators Wednesday at the Capitol less than 24 hours after Trump announced his nomination.

Senate Minority Leader Charles Schumer, D-N.Y., however, has vowed to filibuster the nomination.

Senate Judiciary Chairman Chuck Grassley, R-Iowa, told CNN he is planning to have confirmation hearings in six weeks for Gorsuch.

It was an honor to meet Judge Gorsuch today. I look forward to consideration of his nomination. https://t.co/KFKIchRVQW

Authorities on the Supreme Court say the likely big-ticket items for the spring will be three cases.

One is regarding whether a Christian school in Missouri is entitled to compete for the same state dollars as nonreligious schools. The outcome could affect so-called Blaine amendments in states across the country.

The second case involves property rights in Wisconsin. The third is a transgender bathroom case out of a Virginia high school, and how broadly the federal government may interpret Title IX, a federal law that bars sexual discrimination in education.

Some Senate Democrats, such as Jeff Merkley of Oregon, have said the Supreme Court seat was “stolen” because Senate Republicans refused to hold a hearing on President Barack Obama’s nomination of Merrick Garland to fill the seat of Justice Antonin Scalia.

But that’s because McConnell and other GOP leaders wanted to allow the electorate to decide in the presidential election, Severino said. McConnell almost certainly would have made sure the Senate Judiciary Committee held a hearing on Hillary Clinton’s nominee had the Democratic candidate been elected, she said.

“The Garland nomination was in the middle of an election,” Severino said. “This is not an election year. We are more than three years away from an election.”

Hope you like my nomination of Judge Neil Gorsuch for the United States Supreme Court. He is a good and brilliant man, respected by all.

On Wednesday, Trump told reporters he supported killing a Senate filibuster if necessary by using the so-called nuclear option—a rules change in which 51 rather than 60 votes are needed to bring a nomination to the floor.

“If we end up with that gridlock, I would say, ‘If you can, Mitch, go nuclear,’” Trump said of McConnell. “Because that would be an absolute shame if a man of this quality was put up to that neglect. I would say it’s up to Mitch, but I would say, ‘Go for it.’”

Senate Rule XIX, the two-speech rule, empowers the majority to overcome a filibuster and confirm a nominee. This would require the Senate to remain in the same legislative day until filibustering senators exhaust their ability to speak about the nominee, which would be after they give two floor speeches. Then, the Senate could proceed to vote.

One survey found that the public seems to favor quick action.

A Marist poll released Wednesday, sponsored by the Knights of Columbus, found that 56 percent agreed it should be an “immediate priority” to appoint a Supreme Court justice who will interpret the Constitution as it was originally written, while another 24 percent agreed it is an “important” priority.

Conservatives are hoping Gorsuch will be seated on the court by April 16, when its last session of arguments takes place for the current term, said John Malcolm, director of the Meese Center for Legal and Judicial Studies at The Heritage Foundation. If not, some of the most controversial cases could be reheard, he said.

“It is not the end of the world if he isn’t confirmed by that time, because the court can hold over cases for reargument in the next term if it believes the case needs a full nine justices to decide,” Malcolm told The Daily Signal.

Here’s a look at the three key cases likely to be argued:

The case involves whether states can withhold state grants based entirely on the recipient’s being a religious institution.

Missouri’s Blaine Amendment, on the books since 1875, outlaws the use of public funds to aid a church. Today, Missouri has a program that offers grants to nonprofit organizations to install rubber surfaces made from recycled tires to replace gravel as a way to make playgrounds safer.

However, the state denied Trinity Lutheran Church’s application for the resurfacing even though it ranked ranked fifth out of 45 applications in meeting the government’s criteria.

The case began in 2013. Trinity contends the grant wouldn’t violate the Constitution’s Establishment Clause. It argues that singling out a church for exclusion from the program violates the right to free expression of religion as well as the Equal Protection Clause.

In this property rights case involving the Takings Clause of the Constitution, four siblings in the Murr family owned two adjacent waterfront properties St. Croix, Wisconsin. One property included a cabin built by their parents.

In 2004, zoning regulations prevented the siblings from developing the second lot because the state declared both properties to be one lot.

The family contends the state effectively took the second property by regulating it to the point of having no value without providing just compensation.

This case out of Virginia involves the Obama administration order requiring public schools to allow transgender students to use the restroom that corresponds to their gender identity.

Gavin Grimm, 17, a transgender student who was born female, wanted to use the boys’ restroom at a Gloucester County public high school. Grimm said school policy violated Title IX, the section of the federal code prohibiting discrimination on the basis of sex in any federally funded education program.

A District Court sided with the school system, but the 4th Circuit Court of Appeals ruled for Grimm.

Obama’s Department of Education issued a directive suggesting noncomplying schools would lose federal money if they didn’t allow transgender restroom choice. Texas and a dozen other states challenged the order.

The Supreme Court is expected to determine whether the department can make the final determination in broadly interpreting Title IX.