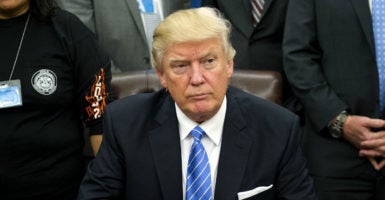 The media was abuzz yesterday with rumors that President Donald Trump was preparing an executive order that would protect religious liberty in the aftermath of the redefinition of marriage.

Trump should issue such an executive order, and he should rescind former President Barack Obama’s executive actions on sexual orientation and gender identity that created many of these problems in the first place.

While a candidate, Trump promised to sign the First Amendment Defense Act into law. He needn’t simply wait for Congress. While legislation provides the best long-term protections, Trump can lawfully enact many of those protections through an executive order right now.

Such an order would instruct agencies of the federal government that they may not penalize certain individuals and institutions for acting on the conviction that marriage is the union of husband and wife.

The act, however, would not apply to federal employees and contractors with respect to their job or contract duties. It does allow reasonable accommodation of federal employees’ religion, as under current law, but it makes clear that it does not relieve the federal government of its duty to provide government services, medical care, or benefits to all who qualify—it must simply respect conscience in doing so.

Trump’s executive order should do the same.

>>> For more on this, see Ryan T. Anderson’s “Truth Overruled: The Future of Marriage and Religious Freedom”

An executive order on religious liberty should also include protections found in the Russell Amendment. This would prevent the federal government from discriminating against faith-based social service providers who maintain staffing policies that accord with their faith.

Religious charities shouldn’t have to give up their mission and identity simply because they partner with the government in serving the public.

In addition to proactively protecting the rights of Americans to hire for religious mission and to act on the conviction that marriage is the union of husband and wife, Trump should also rescind the various Obama executive actions that caused these problems.

A statement from the Trump administration notes that Trump was the “first ever GOP nominee to mention the LGBTQ community in his nomination acceptance speech, pledging then to protect the community from violence and oppression.”

Trump can and should protect all Americans from violence and oppression, but he should not go along with Obama’s policies of elevating “sexual orientation and gender identity” to a protected class.

For example, in 2014, Obama issued an executive order barring “discrimination” on the basis of “sexual orientation and gender identity” in the private employment policies of federal contractors.

But according to liberals advocating such policies, “discrimination” on the basis of “sexual orientation” can be something as reasonable as an adoption agency preferring married moms and dads for orphans.

And “discrimination” on the basis of “gender identity” can be something as simple as having a bathroom policy based on biological sex, not gender identity.

Indeed, the Obama departments of Justice and Education instructed school districts throughout the country that they would interpret a 1972 law, Title IX, to require schools to allow students to use the bathroom, locker room, and shower facility that accords with their self-declared “gender identity.”

They did this by saying the word “sex” would now mean “gender identity.”

Similarly, the Obama Department of Health and Human Services claimed a provision in Obamacare that forbids discrimination on the basis of “sex” means “gender identity”—and thus all health care plans have to cover sex reassignment therapies, and all relevant physicians have to perform them.

Parents and citizens across the country were astonished at this stunning overreach by Washington bureaucracy into local school bathroom policy and delicate medical decisions.

All of this can be undone right away. Trump can rescind Obama’s executive orders, and he can instruct his secretaries of education and health and human services and his attorney general to interpret the word “sex” as Congress intended it—as a biological reality, not as “gender identity.”

Trump can lawfully undo much of the damage that Obama caused, and he can provide immediate protections to all Americans through lawful executive orders.

Congress can then make these orders permanent by passing the First Amendment Defense Act, the Russell Amendment, and the Civil Rights Uniformity Act (which specifies that the word “sex” in our civil rights laws does not mean “gender identity” unless Congress explicitly says so).

Whether it be harassing an order of nuns, forcing doctors to perform sex reassignment therapies, or preventing local schools from finding win-win compromise solutions that would respect all students’ bodily privacy, the Obama administration waged an aggressive and unnecessary culture war.

Because it has done so almost exclusively through executive action, a Trump administration can quickly undo this damage. And Congress can then ratify it permanently in law.