How Senate Republicans Can Break a Supreme Court Filibuster 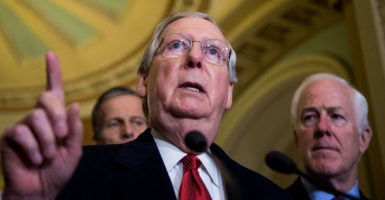 President Donald Trump’s nominee to fill the open seat on the Supreme Court—whoever it may be—can expect rough treatment from Senate Democrats.

Minority Leader Charles E. Schumer, D-N.Y., has pledged to filibuster any nominee he disapproves of, even if it means leaving the nation’s highest court short-handed for years.

Doubtless, some Republicans will call for Majority Leader Mitch McConnell, R-Ky., to exercise the “nuclear option”: eliminating the filibuster so the nominee can be confirmed by a simple majority. After all, Senate Democrats went nuclear in 2013 to thwart Republican plans to filibuster some of President Barack Obama’s nominations.

But success isn’t a given this time.

For one, a majority of senators must approve flouting the rules, and it’s far from clear whether 51 Republicans support using the maneuver to do so. McConnell can afford to lose only two of his Republican colleagues and still prevail in the parliamentary showdown with Schumer.

>>> Read the full report: “A Rules-Based Strategy for Overcoming Minority Obstruction of a Supreme Court Nomination”

Another concern is that using the nuclear option in this case could make eventual elimination of the legislative filibuster—a prerogative that still has broad Senate support despite the 2013 episode—more likely.

Fortunately, invoking the nuclear option isn’t the only way a Senate majority can confirm a Supreme Court justice in the face of minority obstruction.

In a recent Heritage Foundation paper, Ed Corrigan and I detail how Senate rules empower a majority to overcome a filibuster of a Supreme Court nominee—without having to invoke cloture or using the nuclear option.

Specifically, a majority may use Rule XIX (the two-speech rule) to shorten the amount of time members are able to filibuster. This rule prohibits any senator from giving more than two speeches on any one question during the same legislative day.

Once a senator has given two speeches during the same legislative day, he or she may not speak again. The Senate votes when there are no members remaining on the floor who wish to and are allowed to speak. At that point, the support of a simple majority of the senators present and voting is sufficient for confirmation.

First, the Senate would proceed to consider the nomination. The Republican majority would then keep the Senate in the same legislative day and would strictly enforce the two-speech rule on any filibustering senators.

While Democrats could make procedural motions in protest, doing so in almost all cases would terminate the filibustering senator’s speech, thus hastening the moment at which the minority would have exhausted its ability to delay confirmation by filibustering via debate.

Strictly enforcing the two-speech rule is likely to break the filibuster before every Democrat uses the maximum number of speeches allotted under the rules. This is because continuing to filibuster in this context imposes significant costs on rank-and-file Democrats. To have even the chance of success requires each Democrat to hold the Senate floor for a prolonged period in an effort to wait out the Republicans.

The only way for them to prevail in the parliamentary showdown is for Republicans to relent and cease their efforts to overcome the filibuster.

A rules-based strategy to limit minority obstruction in this context would neither jeopardize the legislative filibuster nor unduly empower the majority to limit the rights of individual senators more broadly. It would, however, accomplish the objective of confirming the president’s nominee—provided, of course, that the Republican senators have the determination to succeed.

Note: This article was originally published by The Washington Times on Jan. 30, 2017.