‘This Is Barbarism’: Ukrainian Troops on High Alert as War Intensifies 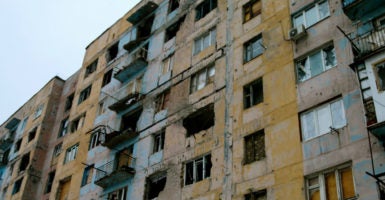 “This is barbarism,” Ukrainian President Petro Poroshenko said Monday in response to the attacks, according to a tweet from his press secretary, Svyatoslav Tsegolko.

Cease-fire monitors from the Organization for Security and Cooperation in Europe, or OSCE, tallied 2,260 “cease-fire violations” on Sunday.

Ukrainian officials claimed the attacks were an attempt by combined Russian forces to derail the cease-fire by effectively baiting Ukraine into retaliatory actions, which could be used as an excuse for further escalations, or for propaganda.

By Monday afternoon, Ukrainian forces announced they had repelled the attack on Avdiivka, but combat was ongoing. Poroshenko, who was on a diplomatic trip to Germany, cut short his visit.

“The president has cut short his visit to Germany because Russian fighters’ attacks on Avdiivka have caused an emergency situation, which may turn into a humanitarian disaster,” Tsegolko, Poroshenko’s press secretary, wrote on Twitter Monday.

Ukrainian troops have been placed on “high alert” along the 250 miles of front lines in the Donbas, Ukraine’s embattled eastern region on the border with Russia, the Ukrainian military said Monday.

Sunday and Monday’s attacks were significant because they marked an uptick in the typical level of fighting, but they were not extraordinary. They are simply the latest chapter in a cyclical pattern of endlessly escalating and diminishing violence, which has come to define the war in Ukraine. A memorial to war dead in Avdiivka.

The conflict has killed more than 10,000 Ukrainians, and displaced about 1.7 million people, according to estimates by the U.N. and other humanitarian aid groups.

The conflict—Europe’s only ongoing land war—retains the potential to escalate into a major, larger conflagration.

Kate M. Byrnes, acting deputy chief of mission at the U.S. Mission to the OSCE, said in Vienna on Sunday that the cease-fire in Ukraine remained “elusive.” She called for a withdrawal of all banned weapons from the front lines, and for both sides to commit to the cease-fire’s terms.

“Otherwise, there is little to stop small-scale clashes from escalating, and this conflict from continuing,” Byrnes said.

As part of the February 2015 cease-fire, which is called Minsk II, heavy weapons are banned from the front lines.

The OSCE is the multinational group charged with monitoring the Ukraine cease-fire, but it has no enforcement mandate. OSCE monitors identify cease-fire violations through direct observation, or by hearing the sounds of explosions or small arms fire. However, a single cease-fire violation might, in fact, comprise numerous individual attacks.

Ukrainian officials take seriously the possibility of a full-scale Russian invasion. Ukraine’s military doctrine identifies Russia as the country’s top military threat, and Poroshenko, Ukraine’s president, has ordered a top-to-bottom overhaul of the military by 2020.

There are also worries about the war spilling over to other countries throughout the region.

In the Baltic countries, for example, civilian defense units harkening back to the partisan groups of World War II are actively training to defend against a Russian invasion.

The U.S. and NATO have shifted military assets eastward in a move to reassure NATO’s eastern flank, which has been rattled by Russia’s aggression in Ukraine, as well as to deter Moscow from military adventurism—covert or overt—against any NATO member. The war in Ukraine—Europe’s only ongoing land war—is approaching its third anniversary.

The situation throughout Eastern Europe, especially within the former boundaries of the Soviet Union, has become a dangerous cycle of brinkmanship, with NATO and Russia locked in a tit-for-tat ratcheting up of their military presence throughout the region.

And as Ukraine rapidly rebuilds its conventional military forces with an eye toward Moscow, the country is also waging a cultural purge of all things related to its Soviet past and Russia.

Russian TV channels are being banned, it’s illegal to play the Soviet national anthem in Ukraine, and cities with Soviet-era names are being renamed.

For Ukrainian leaders, there is little wiggle room—from both a strategic military perspective, as well as with public opinion—to tolerate a Russian provocation without it leading to a major escalation of the war.

More of the Same

While a full-on Russian invasion is Ukraine’s nightmare scenario, there is already a low-intensity war ongoing in the Donbas, in which Ukrainian troops are engaged in daily combat against Russian troops and their separatist proxies.

According to the Ukrainian military, combined Russian-separatist forces focused their attacks on Sunday on Ukrainian positions at the southern end of the front lines near the industrial port city of Mariupol. A Ukrainian soldier at a front-line position near Novomykhailivka.

Pro-Russian separatists took control of Mariupol in the opening months of the war in 2014. Ukrainian forces, bolstered by volunteer paramilitary units, took back the city of nearly half a million people in a series of battles from May through June 2014.

Combined Russian-separatist forces countered with a series of raids and tank attacks on Ukrainian forces around the city in August and September 2014. But Ukraine repelled the offensive, and Mariupol has remained under Kyiv’s control.

Despite two cease-fires, however, the fighting never stopped.

Since September 2014, the front lines have remained largely static outside of Mariupol. With the war on their doorstep for almost three years, the city’s residents have grown accustomed to the daily rumble of fighting coming from the front lines less than 10 miles away. A building damaged by artillery in Marinka.

Overall, Ukrainian forces reported 38 separate attacks on their positions in the Mariupol area on Sunday, 14 of which comprised heavy armor. More than 50 separate attacks occurred along the 250-mile length of the front lines.

“The situation in the Donetsk sector near Avdiivka remains tense,” the Ukrainian military said in a statement on Monday. “In the morning, the enemy continued their insidious attacks with the use of tanks and artillery systems … At about 10:30 [a.m.] Kyiv time, the shelling from heavy weapons stopped, but harassing fire from small arms is continuing.”

At the northern end of the front lines near the Russian border outside the separatist stronghold of Luhansk, combined Russian-separatist forces launched a total of six heavy artillery attacks against Ukrainian positions on Sunday.

No End in Sight

The war in eastern Ukraine is approaching its third anniversary, and the conflict shows little sign of easing off.

During the days the fighting is usually relatively calm, or nonexistent, while OSCE cease-fire monitors patrol the war zone in their bright white SUVs. But the cease-fire monitors do not typically work after dark, which is when, like clockwork, the war begins in earnest.

It’s a daily charade, in which daily battles comprising hundreds of shots fired are registered as “cease-fire violations.” Ukrainian soldiers in a trench in Pisky.

The war has been mostly static since the Minsk II cease-fire went into effect in February 2015. Consequently, both sides are dug in. For its part, the Ukrainian military has constructed a series of trenches and fortified positions. Major road intersections are defended with armor, and the surrounding fields are heavily mined.

According to various estimates from both Ukrainian military sources and independent intelligence groups, combined Russian-separatist forces in the Donbas comprise about 40,000 pro-Russian separatists and about 5,000 Russian regulars.

For those civilians caught living within its grasp, war has become a way of life.

In Mariupol over the weekend, residents duct-taped their windows the same way Floridians do to prepare for a hurricane.

According to the social media posts of some Mariupol residents, the sounds of artillery from the front lines on Sunday were loud enough to rattle windows in the city center.

A week before Christmas in Avdiivka, a woman carried an infant in her arms as she walked along a sidewalk pockmarked by mortar shrapnel. Occasionally, the air rumbled with the burst of a mortar, or crackled with a machine gun burst. Framed in the background was an apartment building shredded to ruins by years of artillery strikes.

In the snowy woods outside of Novomykhailivka in late December, Ukrainian troops from the Aidar Battalion were hunkered down in primitive underground shelters, holding the line against their combined Russian-separatist enemies.

The living conditions were miserable. The bitter cold was inescapable, and despite three years of combat operations, the troops were still undersupplied with fresh food and basic military kit like boots and body armor. A warning sign on the edge of a minefield in Avdiivka.

Some of those troops had been serving in combat since the war began in April 2014. Yet, they were resolved to keep fighting until the conflict was over.

The week before Thanksgiving 2016 in the front-line town of Marinka, the nighttime sky was alight with the crisscrossing paths of tracer fire.

The sky buzzed with the sounds of drones orbiting overhead. The sounds of mortars and artillery were a constant drumbeat, rising and falling in pace and intensity like the movements of a symphony.

At an elementary school in Marinka, Red Cross humanitarian workers teach students how to react in an artillery attack.

Inside the school, green and red stickers are attached to the hallway walls at intervals, respectively indicating where it is, and is not, safe to take shelter in an artillery attack. The Red Cross also teaches residents about landmine safety. Children are told not to play in fields.

During the day in Marinka, there is a cacophony of workers hammering nails as they repair artillery-damaged buildings. By night, the pounding of nails is replaced by the hard cracking burst of mortar explosions, and the metal snarl of machine guns.

There is one curious side effect of the war—a surge in the war zone’s fowl population.

Due to the war, hunting has been banned in the Donbas.

“The war continues, but life goes on,” Edward Kulinich, a Ukrainian civilian volunteer who transports supplies to front-line troops, told The Daily Signal.