Why a Delay of Obamacare Repeal Threatens Pro-Life Goals 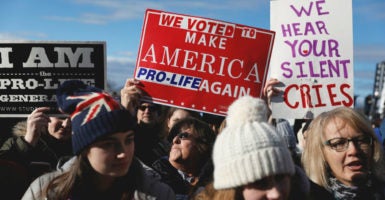 Troubling signs are appearing that congressional Republicans may not be as committed to the life agenda as they once were.

The pro-life movement, tens of thousands of whom gathered in Washington, D.C., this weekend to participate in the March for Life, has long advocated stripping funds to America’s largest abortion provider, Planned Parenthood. The movement has also supported the right to religious liberty for those organizations who have conscience objections to paying for contraception.

(It was the latter issue, you may recall, that was challenged when the Obama administration decided to sue Catholic nuns in the Supreme Court.)

In 2015, the pro-life movement secured a victory in both these areas with the passage of an Obamacare repeal bill that eliminated taxpayer funding to Planned Parenthood and protected conscience rights.

Though the bill was later vetoed by President Barack Obama, the 2015 bill is reportedly being used as baseline architecture for the 2017 repeal effort.

Unfortunately, certain congressional Republicans no longer seem to be on the same page with pro-lifers.

(For a detailed explanation of how, see here. A Cassidy staffer told Yahoo News that the bill will be altered, but until it is, conservatives should be concerned.)

Then there is the news from the Republican retreat in Philadelphia this week, where House Speaker Paul Ryan is looking to delay the repeal of Obamacare until the spring or summer.

This is hugely problematic, as a delay of Obamacare is the first step toward ensuring the effort never happens at all.

First, there is simply the question of will. The longer something is delayed in Congress, the less likely it is that action is taken.

Delaying repeal allows members of Congress to focus elsewhere, to come up with justifications not to do something, or even to make arguments for keeping parts of Obamacare.

One of the unspoken (but ironclad) rules in Washington holds that, if given enough time, members of Congress will always come up with an excuse not to act.

Second, and more critically, a delay means it is less likely that the budgetary fast-track tool known as reconciliation can be used to repeal Obamacare.

The reconciliation process is a necessary first step in initiating the full repeal of the law, for the primary reason that it can avoid the Senate filibuster—that is, instead of requiring 60 votes to pass, like most things in the Senate, reconciliation can be passed with only 51.

For the pro-life movement, this is a “now or nothing” moment.

The simple reality is this. If Planned Parenthood is going to be defunded in Obamacare, reconciliation must be used. Otherwise, the provision will succumb to a Democratic filibuster, and be removed from the bill.

The longer the GOP continues to delay on repeal, the more unlikely it is it’ll be able to use the reconciliation vehicle to repeal Obamacare, much less to defund Planned Parenthood.

The rhetoric coming out of the Republican retreat this week underscores the seriousness of the situation for the pro-life movement. Though the House has proven its pro-life mettle with the passage of bills like H.R. 7, Senate Majority Leader Mitch McConnell will not commit to bringing pro-life bills to the Senate floor.

This leaves just one area for pro-life priorities to gain any real traction this Congress, and that’s in the repeal of Obamacare through reconciliation.

The pro-life movement has made significant strides in the decades since Roe vs. Wade. As Vice President Mike Pence told crowds of marchers on Friday afternoon, “Life is winning again in America.”

However, unless Congress acts in the next several weeks to repeal Obamacare and defund Planned Parenthood, it’ll effectively be putting a ceiling on what the pro-life movement can accomplish this year—and for years to come.