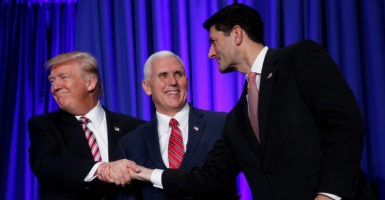 Some Republican lawmakers are beginning to have doubts about the GOP’s plans to repeal and replace Obamacare, they revealed in a closed-door gathering Thursday in Philadelphia.

But those lawmakers find themselves at odds with conservatives who have for years pushed for repeal of the Affordable Care Act—as well as the top Republican in the House.

“We have to repeal it,” Rep. Jim Jordan, R-Ohio, said of Obamacare in an interview with The Daily Signal. “That’s what we told voters we’re going to do, and we have to repeal all of it. Every mandate. Every regulation.”

The Washington Post reported Friday that some Republicans appeared to be wavering over how to follow through on their long-held promise to repeal and replace Obamacare.

The Post obtained a recording of a session on health care held Thursday at House and Senate Republicans’ joint retreat at the Loews Philadelphia Hotel.

Some lawmakers in the meeting expressed concerns over tackling major issues accompanying repeal of the health care law, including how to craft a replacement plan in a timely manner and whether to include a measure to defund Planned Parenthood in the repeal legislation.

Reps. Tom McClintock of California, John Faso of New York, and Tom MacArthur of New Jersey were among those The Post identified on the recording.

Despite their hesitations, however, House Speaker Paul Ryan reaffirmed the GOP’s commitment to rolling back the health care law this year.

“We have to move quickly because we’re in the midst of collapse [of the health care law],” Ryan said during an event Friday organized by Politico.

“We have a moral obligation to fix this problem. Period,” he said.

#Obamacare has been a spectacular failure. We're going to replace it with a more affordable, patient-centered system. pic.twitter.com/HBiMeAucBj

In a meeting with fellow Republicans in Philadelphia, Ryan mapped out a timeline for repealing and replacing the health care law. He told lawmakers that Congress would pass the bill repealing Obamacare by March or April.

That legislation—passed through a budget tool called reconciliation—also would include parts of a replacement.

For years, conservatives such as Jordan, who previously chaired the roughly 40-member House Freedom Caucus, have made a target of Obamacare—which Congress passed in 2010 without a single Republican vote.

Now that Republicans have the numbers to successfully repeal the health care law, Jordan is calling for Congress to move quickly.

“I want to do it as soon as we possibly can, because I start from the very fundamental premise that health care will be better and cost less when Obamacare is gone,” the Ohio Republican said. “So let’s get rid of it as quickly as we can.”

Despite a commitment to repealing Obamacare in coming weeks, some Republicans are skeptical that ending taxpayer funding of Planned Parenthood, the nation’s largest abortion provider, should be included in that action.

That provision was part of the bill Republicans sent to President Barack Obama’s desk early last year to roll back major provisions of Obamacare.

Obama vetoed that bill. But with Republican control of both chambers of Congress and the White House, conservatives are pushing for the new repeal bill to at a minimum mirror the legislation passed last year.

#Obamacare is collapsing. We've got to step in and provide relief to Americans suffering under this law. pic.twitter.com/pLoBvawuTc

Ryan said earlier this month that the House will include Planned Parenthood’s defunding in the budget reconciliation bill the chamber takes up this year.

And conservative lawmakers are urging the House speaker to follow through on that pledge.

“Of course the Planned Parenthood funding should be dealt with in that bill,” he said.