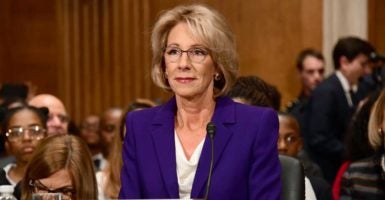 Betsy DeVos was picked to head the Department of Education by then-President-elect Donald Trump in November. (Photo: Ron Sachs/dpa/picture-alliance /Newscom)

Republican senators Susan Collins of Maine and Lisa Murkowski of Alaska announced Wednesday they would not vote for Betsy DeVos’ confirmation as education secretary.

“Secretary-designate Betsy DeVos has been a champion of education choice,” said Lindsey Burke, an education policy expert at The Heritage Foundation. “Options like the D.C. Opportunity Scholarship Program, which has already been jeopardized over the past 8 years, education savings accounts for children trapped in failing Bureau of Indian Affairs schools, and opportunities to create more choices for military families could all be impacted by delaying or denying her confirmation.”

White House press secretary Sean Spicer said he had “100 percent confidence that [De Vos] will be the next secretary of education.” If the remaining 50 Republican senators vote for DeVos, Vice President Mike Pence could cast the tie-breaking vote, resulting in DeVos’ confirmation.

“As an educator myself for over 20 years, I have full confidence that the character traits of Betsy DeVos are just the recipe that our children need,” Brat told The Daily Signal in a phone interview. “The status quo is currently not doing the job for too many kids, particularly those in the inner cities and we finally have a chance to get things right and to make every single child in America both productive in our economy but more importantly to give them a sense of purpose in life.”

The letter to leaders of the Senate Committee on Health, Education, Labor and Pensions calls for DeVos’ confirmation “at the earliest possible date so she can go to work on behalf of our students and parents,” was signed by 15 members of the House Committee on Education and the Workforce.

The committee voted 12-11 Tuesday along party lines to move the DeVos nomination to the full Senate for a floor vote.

Lawmakers who signed the letter said that regardless of the schools parents may choose for their children, they are heartened by DeVos’ “efforts to break up the bureaucracy.”

“Be it home school, private school, charter school, public school, or virtual school, parents should have the power to do what is best for their kids … Removing power from bureaucrats and placing it in the hands of parents should be a goal on both sides of the aisle. This will ensure students are not trapped in failing schools by virtue of their ZIP code,” the letter states.

President Donald Trump announced his choice of DeVos in November, when he was  still president-elect.

Sen. Al Franken, D-Minn., said Thursday on MSNBC’s “The Rachel Maddow Show” that DeVos is “an ideologue who knows next to nothing about education policy, as she demonstrated in her confirmation hearing.”

Brat says that due to the patriotism and dedication DeVos has shown in availing herself to the scrutiny the position demands, he is confident that she will be a needed advocate for children’s education issues across the country.

“It is very clear that to make a commitment to the country for four years, and to undertake the scrutiny that comes with being a secretary is also a true sign of her commitment to make things better for the kids of this country,” Brat said.

This report has been updated to reflect the committee vote in favor of the DeVos nomination. It was updated again on Feb. 1 to reflect the announcement by two Republican senators they would not support De Vos.