In Defense of Bill Pryor for the Supreme Court 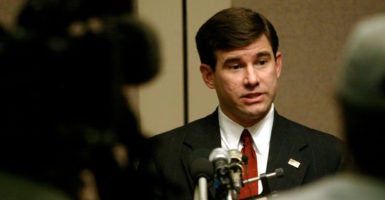 William Pryor is a federal judge on the U.S. Court of Appeals for the 11th Circuit and is on President Donald Trump's short list of candidates to fill the current vacancy on the Supreme Court. (Photo: Tami Chappell /Reuters/Newscom)

But in recent weeks, he’s come under intense scrutiny from some who claim that he supports the LGBT agenda and would be a foe to religious liberty.

I have known Bill Pryor for more than three decades since 1986, when he was a student at Tulane Law School and president of the school’s nascent Federalist Society chapter—and already demonstrating his conservative bona fides.

These claims about Pryor are simply wrong.

This strange turn of events stems from two opinions, which were written by another judge. My Heritage Foundation colleague John Malcolm described in an article for National Review Online why these decisions cannot fairly be used to paint Pryor as a nominee who would make up rights not found in the Constitution.

Pryor’s views on everything from morality to his faith to abortion to criminal sentencing are well known.

But more importantly, so is his fidelity to the Constitution—from his time as attorney general of Alabama to his service as a federal court of appeals judge.

Pryor is a dedicated public servant who understands the proper, limited scope of the judiciary. Indeed, he has explained:

My own view on an issue is something that does not influence me as a judge—nor should it … What matters is what the Constitution says about it, and what the Supreme Court says in decisions that I have to apply.

This is precisely the way a good judge should think about the law.

Though some are claiming Pryor is not an advocate of religious liberty, many of his decisions show that the exact opposite is true.

In the Eternal Word Television Network case, Pryor specially concurred with the 11th Circuit’s decision granting a preliminary injunction to EWTN in its challenge to the “accommodation” offered to nonprofit organizations with religious objections to providing contraception and abortifacients in their employee health insurance plans.

On the government’s claim that requiring EWTN to submit a form did not “trigger” the objectionable coverage and violate EWTN’s religious liberty, he wrote, “Rubbish. Even if the form alone does not ‘trigger’ coverage—whatever that means—it is undeniable that the United States has compelled the Network to participate in the mandate scheme … ”

He pointed out that “the Network has declared that its religion requires it to abstain from signing and delivering” such a form and “it is not our role to second guess this ‘difficult and important question of religion and moral philosophy.’”

The Pelphrey case involved a county planning commission’s practice of opening its sessions with an invocation by local religious leaders. Pryor concluded that this “legislative prayer” did not violate the First Amendment and that it’s not the role of courts to parse the content of prayers.

He wrote, “We would not know where to begin to demarcate the boundary between sectarian and nonsectarian expressions.”

In the Florida Department of Corrections case, Pryor held that the government failed to offer a compelling government interest for denying kosher meals to inmates whose religious beliefs require them to keep kosher.

He rejected Florida’s argument that the meals would cost too much, since it provided no evidence to support that claim and the state had previously provided those meals. He also criticized Florida for failing to accommodate religious people when it accommodated people with “vegan, medical, and therapeutic diets at similar marginal costs.”

Though conservatives may like these outcomes, what matters most is Pryor’s method of applying the law and the Constitution in reaching the result in these cases.

A results-oriented jurisprudence that ignores the law is not something conservatives should champion. It flies in the face of the judiciary’s properly limited role and is unmoored from the Constitution.

One of the most important qualities of a judge is impartiality—the ability to set aside his personal feelings and beliefs and ensure they don’t interfere with the way he applies the plain text of a statute or the Constitution.

This approach certainly does not enable a judge to try to impose on the country an LGBT agenda. I know Bill Pryor, and his record demonstrates that Trump would be hard-pressed to find a judge more committed to these principles.