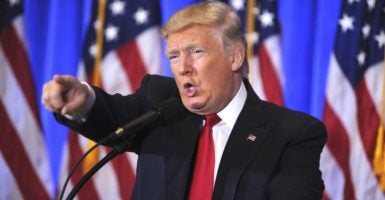 “The mainstream media isn’t the only game in town anymore.”

It’s long been a tradition that the mainstream outlets sit in the front rows at White House press briefings, and typically their reporters are most likely to get to ask questions.

“It doesn’t matter the president, his spokesman generally sucks up to the big dogs of the media: the big newspapers, broadcast networks, the cable news channels, and the dominant wire service, the Associated Press,” Poynter’s James Warren writes.

But Spicer is shocking the D.C. media establishment by making it clear that the Trump White House is going to be responsive to the conservative media.

In fact, at the first press briefing Spicer did, he called first on the New York Post—the conservative newspaper in New York City. He also called on Newsmax, the Christian Broadcasting Network, and Fox News in that same briefing.

In his second briefing, Spicer gave the first question to LifeZette, and later called on Breitbart and The Daily Signal’s own Fred Lucas.

“The order in which [Spicer] called on people suggests it is a new day when it comes to who this White House considers being priorities in terms of being called on,” CNN’s Jake Tapper remarked Monday.

It’s no secret the mainstream media is biased, and there’s a double standard on how liberal and conservative politicians are treated.

But the mainstream media also regularly frames its narratives and questions around liberal values and priorities.

Think about the difference between a question about “marriage equality” rather than whether all children deserve a mom and a dad, or one about reproductive rights instead of whether unborn children old enough that they could survive if born prematurely should still be aborted.

Consider the difference between focusing on potential cuts to entitlement programs and who they’d affect instead of talking about how the U.S. plans to avoid becoming the next Greece while remaining on this unsustainable fiscal track. Or a question about the welfare and future of the Dreamers—the young adults who were brought illegally to the U.S. as children—instead of one about the impact illegal immigration has on job opportunities for low-skilled American citizens.

The wall on the U.S.-Mexico border. Defunding Planned Parenthood. The Keystone pipeline.

These are all issues of huge importance to conservative voters—and notice they weren’t framed as being about oh, racism, or hurting women’s reproductive rights, or wanting to destroy the environment.

And the trend continued Tuesday. The Daily Signal’s Lucas asked about the Collins-Cassidy health care bill, a bill that would preserve much of Obamacare.

Today, immigration enforcement organizations and activists expressed concern that they haven’t seen immediate action on [the amnesty programs] DACA and DAPA. … That was a key campaign pledge of President Trump on the campaign trail. When can people expect action on that?

Spicer’s willingness to call on conservatives suggests the Trump administration isn’t going to buck accountability to conservatives. Stinson’s question won’t be the last hard one Spicer faces from the right, no doubt.

And for many in the mainstream media, the new style of White House press briefings could offer a unique opportunity to hear conservatives. It’s no secret that liberals widely outnumber conservatives in the media—just consider what an October analysis found:

In all, people identified in federal campaign finance filings as journalists, reporters, news editors, or television news anchors—as well as other donors known to be working in journalism—have combined to give more than $396,000 to the presidential campaigns of [Hillary] Clinton and [Donald] Trump, according to a Center for Public Integrity analysis.

Across the paper’s many departments, though, so many share a kind of political and cultural progressivism—for lack of a better term—that this worldview virtually bleeds through the fabric of The Times.

As a result, developments like the Occupy movement and gay marriage seem almost to erupt in The Times, overloved and undermanaged, more like causes than news subjects.

If those in the mainstream media are serious about being objective, and not parroting liberal perspectives, they could gain an understanding of conservative principles and values through listening to outlets like The Daily Caller, LifeZette, and Newsmax as they ask questions at the White House press briefings.

The Associated Press—perhaps stinging from the rejection of not being given the first question, as is tradition—headlined a piece, “Pro-Trump site gets 1st question at White House briefing.”

Yeah, I’m not aware of the AP ever referring to a mainstream media outlet as “pro-Clinton.”

In his inaugural speech, President Donald Trump said, “We are transferring power from Washington, D.C., and giving it back to you, the American people.”

Choosing to call on a variety of media outlets—both mainstream and conservative—in press briefings, as well as making a place for outlets without a Washington correspondent to Skype in, is just one way the Trump White House is showing it’s serious about being responsive to what the people want to know, not just what elite D.C. journalists are interested in.