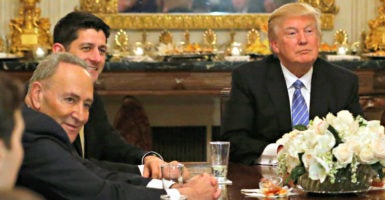 President Donald Trump, here with Senate Minority Leader Chuck Schumer and House Speaker Paul Ryan at the White House on Jan. 23, will be critical to the nation's ability to get its fiscal house in order. (Photo: Jonathan Ernst/Reuters /Newscom)

The Congressional Budget Office’s budget and economic outlook for the next decade paints a grim picture of the nation’s fiscal situation and shows we continue to be on an unsustainable budget path.

Despite years of warnings by CBO and others that this path will lead to fiscal disaster, Congress continually has failed to make substantive reforms. With Republicans now in control of the White House as well as Congress, they have the opportunity to make much-needed reforms to avert the crisis.

1. Spending continues to climb out of control. Over the next 10 years, CBO projects spending will rise from around $3.9 trillion annually to over $6.5 trillion a year. This reflects an increase of almost $2.6 trillion a year by 2027.

Cumulatively, CBO estimates outlays will be $52.5 trillion over the next 10 years. As a percentage of the overall economy, spending is projected to rise from 20.7 percent of gross domestic product in 2017 to 23.4 percent of GDP by 2027. This is 3.2 percentage points higher than average spending over the past 50 years.

As in the past several years, the biggest drivers of the increase in spending continue to be entitlement programs and interest on the national debt. By 2027, CBO projects Congress will spend over $3.8 trillion annually on Social Security and major health care programs, which include Medicare, Medicaid, and Obamacare.

America’s aging population is rapidly adding to our already unsustainable entitlement spending. CBO estimates that the population over age 65 will grow by 39 percent over the next decade, to around 19 percent of the total population:

The effects on the federal budget of the aging population and rapidly growing health care costs are already apparent over the 10-year horizon—especially for Social Security and Medicare—and will grow in size beyond the baseline period.

Although past House budgets have included reforms to health care programs, Congress consistently has failed to follow through and address the problem, which is making it even larger. In 2016, Medicare and Medicaid spending both grew by 5 percent (after accounting for shifts in the timing of certain Medicare payments), adding another $45 billion in federal health spending.

In addition, CBO estimates that the coverage expansion provisions of the Affordable Care Act, or Obamacare, will add $119 billion in federal spending in 2017.

CBO Director’s Statement About the Budget and Economic Outlook for 2017 to 2027 https://t.co/q0VHRxNhhK

President Donald Trump has hinted that Medicaid reforms are on the horizon, but a specific proposal is yet to be seen. Congress is also in the process of repealing and replacing Obamacare, which would help to control some of the rising health care costs.

Interest spending also continues to skyrocket in CBO’s latest projections, going from $270 billion per year in 2017 to $768 billion annually by 2027. At the current pace, spending on interest payments will be about $30 billion higher than spending for national defense programs by the end of the decade. When coupled with entitlements, spending for these activities alone will consume more than 70 percent of the federal budget by 2027.

While the president has pledged not to take on Medicare and Social Security reform, it is clear that spending for these programs is unsustainable and will continue to drive up interest payments and crowd out other important government programs, if left unchanged. In addition, Congress faces a “mini-cliff” for funding going into 2018: Under the Budget Control Act, base discretionary spending is set to decline from $1.070 trillion to $1.064 trillion.

Undoubtedly, some in Congress will press for passage of another budget deal like the one cut by former President Barack Obama and former House Speaker John Boehner, and increase discretionary spending for 2018 and perhaps beyond.

Congress should resist this pressure and abide by the overall discretionary spending levels set by the Budget Control Act, prioritizing national defense and cutting spending on nondefense programs that are wasteful, crony, or within the proper purview of states, localities, and the private sector.

2. Deficits soon will be on the rise again. Over the past few years, deficits have been in a period of decline. However, by 2018, CBO projects deficits will reach a low of $487 billion and then take a dramatic upturn, increasing to over $1.4 trillion annually (5 percent of GDP) in 2027.

Cumulatively, over the next decade deficit spending will add an additional $9.4 trillion to the federal debt held by the public. As with increases in spending, the main contributors to rising deficit levels will be entitlement programs and interest payments on the debt. Unless major steps are taken to decrease spending, reform entitlements, and get the federal debt down to a more sustainable level, deficit levels will continue to rise out of control.

Compared to estimates released just last August, the debt level in 2026 is projected to be 1.5 percent of GDP higher in the latest estimates. In July, CBO released its updated long-term budget projections, which projected that by 2033 the debt would reach more than 100 percent of GDP, outpacing the entire U.S. economy.

This is six years sooner than CBO projected only a year earlier. Clearly, the impending debt crisis is continuing to accelerate and soon will be within the budget window.

Congress and the president should act now and not let the burden of debt continue to grow for another year.

4. Rising revenues may increase the spending problem. CBO projects that over the next 10 years, revenues will average 18.2 percent of GDP, 0.8 percent higher than the 50-year average. Ever-increasing deficits and debt levels are driven by too much spending, not too little taxation.

Trump has pledged to make tax reform a priority early in his administration, and Congress seems eager to reform our current system as well. Congress and the Trump administration should work together to find a solution that will cut taxes, freeing up valuable resources to robustly grow the economy.

Critical Work Ahead for Trump, Lawmakers

As they have for the past several years, CBO’s latest budget projections reinforce the fact that the country is headed down the wrong fiscal path.

If policymakers don’t make changes in the immediate future, the situation will continue to spiral out of control and cause damages that will take years, if not decades, to recover from. Spending, deficits, and debt are expected to expand significantly over the next decade, while entitlement and interest spending will continue to consume more and more of the budget.

Congress and Trump must take action now to fix the spending and taxation problem and put us back on a path toward economic prosperity and opportunity for future generations.