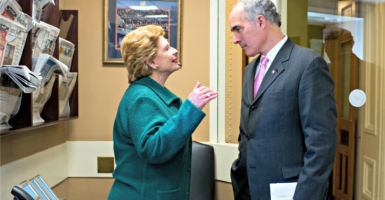 Confirmation votes for Donald Trump’s Cabinet nominees could be the first indicator of how Senate Democrats from states that went for Trump prepare for re-election challenges in 2018.

“Democrats will have to balance their party affiliation with the way their states voted,” @InsideElections says.

Democrats must defend 25 of the 33 Senate seats that will be up for grabs in midterm elections, including two held by independents who caucus with Democrats.

Of those 25 seats, 10 Democrats face re-election in red states that Trump won, and two more will be up for re-election in Minnesota and Virginia, battleground states Hillary Clinton won by closer-than-expected margins.

Even though midterm elections typically are bad for the president’s party, the 2018 map has Senate Republicans hopeful of gaining a 60-seat, filibuster-proof supermajority that would allow them to advance Trump’s agenda and judiciary picks more easily. Republicans currently hold 52 seats, after a net loss of two seats Nov. 8. President Barack Obama’s party endured two crushing midterm losses in 2010 and 2014. But his two most recent predecessors, George W. Bush in 2002 and Bill Clinton in 1998, saw their parties gain seats in midterm elections.

Most if not all of Trump’s Cabinet nominees are expected to be confirmed by the Republican-controlled Senate. However, Senate Minority Leader Chuck Schumer, D-N.Y., has called for stalling the votes for eight nominees until March.

Schumer  targeted these nominations: Jeff Sessions for attorney general, Rex Tillerson for secretary of state, Steve Mnuchin for treasury secretary, Tom Price for health and human services secretary, Mick Mulvaney for director of the Office of Management and Budget, Betsy DeVos for education secretary, Andy Puzder for labor secretary, and Scott Pruitt for administrator of the Environmental Protection Agency.

Many Democrats likely will oppose outright many if not all eight nominations. But what about the 10 vulnerable senators?

“These 10 Democrats will have to balance their party affiliation with the way their states voted, and a lot of factors will go into those [confirmation] votes,” Nathan Gonzales, editor and publisher of Inside Elections, told The Daily Signal.

This fact may give them pause before they obstruct the new president ahead of the 2018 elections.

By contrast, five other Senate Democrats—Bill Nelson of Florida, Bob Casey of Pennsylvania, Sherrod Brown of Ohio, Debbie Stabenow of Michigan, and Tammy Baldwin of Wisconsin—represent states Trump carried by comparatively smaller margins, which might give them more leeway with voters going into 2018.

For these reasons, I could not support Representative Mike Pompeo's nomination to direct the @CIA.

Two states where Democrat Hillary Clinton won by a tighter margin than expected also could have competitive Senate races.

Tim Kaine of Virginia, Clinton’s running mate, and Amy Klobuchar of Minnesota both plan to seek re-election. Clinton won Virginia by only 5 percentage points, despite Kaine’s presence on the ticket. She won historically Democratic Minnesota by only 1.5 percent.

“It will be on a case-by-case, senator-by-senator basis, and margins matter,” Gonzales said of Democrats’ willingness to vote for Trump’s Cabinet nominees. “It’s hard to lump Trump-state Democrats like Manchin [of West Virginia], in a state where Trump won by huge margin, with Stabenow [of Michigan], a state Trump barely won.”

Republicans have to defend eight Senate seats in 2018, but just two are in battleground states.

The Senate’s two independents who caucus with Democrats, Vermont’s Bernie Sanders and Maine’s Angus King, also are up for re-election.

“Democrats have an extraordinary number of seats up in 2018,” Lee Edwards, distinguished fellow in conservative thought at The Heritage Foundation, told The Daily Signal. Edwards added:

These Democrats will have to show they are not being obstructionist. But winning a supermajority will also depend on the leadership of Senate Republicans and the White House in defining the issues.

In the first Senate confirmation votes, none of the 12 vulnerable Democrats voted against  retired Gen. James Mattis as defense secretary (98-1) or retired Marine Gen. John Kelly as homeland security secretary (88-11).

Voted in favor of Gen. Kelly. Confident he will bring a measured approach & perspective to @DHSgov

In the Armed Services Committee vote to recommend Mattis’ confirmation to the full Senate, Nelson, McCaskill, Donnelly, Kaine, and King all voted yes.

Kaine voted no Monday along with the Foreign Relations Committee’s nine other Democrats, however, in the 11-10 approval of Tillerson as secretary of state.

Inside Elections puts the Senate races in Indiana, Missouri, North Dakota, and West Virginia in the “pure toss-up” category. Democrats can take some hope that the organization’s ratings of Senate races, released Friday, put Florida, Montana, and Wisconsin in the “toss-up/tilt Democrat” category.

As for Republican incumbents, the Senate race in Arizona is projected to be “Republican favored” while Nevada is in the “lean Republican” category.

Despite the map, Republicans should not presume success in 2018, author and presidential historian Craig Shirley told The Daily Signal. Doing so could postpone bold action, he warned:

Off years are just not good years for the president’s party. Trump and congressional Republicans have to emulate the Roosevelt and Reagan models and get as much done as possible in the first 100 days. Don’t slow down. Strike while the iron is hot.

I'm excited to be with my colleagues & fellow Americans as we watch @realDonaldTrump be sworn in as our 45th President. #Inauguration pic.twitter.com/N3ZN0NrctM