A Look at 4 of the GOP’s Obamacare Replacement Plans 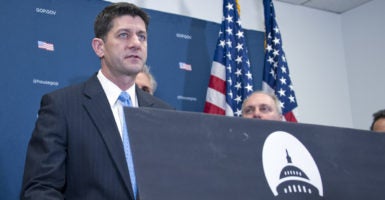 As Republicans debate their strategy for repealing and replacing Obamacare, GOP lawmakers have been accused of failing to put forth a replacement plan for the health care law.

But since President Barack Obama signed the Affordable Care Act into law in 2010, Republicans in both the House and Senate have unveiled a number of proposals mapping out how the health care law would be replaced, should it be dismantled.

Most of the major plans share some key provisions: they offer tax credits to consumers; expand the use of health savings accounts, or medical savings accounts; and reform Medicaid.

But differences emerge in the nitty gritty details of each proposal, including whether tax credits are based on age or income, where to cap the tax exclusion on employer-sponsored coverage, and whether to turn Medicaid into a block grant program or per capita allotment.

House and Senate Republicans, along with President Donald Trump, are meeting in Philadelphia, Pennsylvania, on Thursday and Friday for their annual retreat, where House Speaker Paul Ryan, R-Wis., said earlier this month lawmakers will have a “full, exhausting” conversation on their plan for repealing and replacing Obamacare.

Already, there are at least four plans crafted to replace the law. On Monday, Republican Sens. Bill Cassidy of Louisiana and Susan Collins of Maine introduced another proposal ahead of this week’s GOP gathering.

While the other major Republican proposals repeal all of Obamacare, the Cassidy-Collins plan repeals only the health care law’s mandates, like the individual and employer mandates; maintains its subsidies and taxes; and allows states that like Obamacare to keep Obamacare.

In addition to the Cassidy-Collins plan, The Daily Signal examined proposals offered by Ryan and the Republican conference; Rep. Tom Price, R-Ga., who Trump nominated for secretary of health and human services; the Republican Study Committee; and Sen. Richard Burr of North Carolina, Sen. Orrin Hatch of Utah, and Rep. Fred Upton of Michigan.

See how these Obamacare replacement plans stack up.