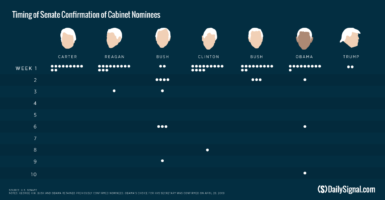 The Washington Post called the Democrats’ tactics “an unprecedented break with Senate tradition.”

Trump’s picks have fared worse than past Cabinet nominees. Even though Trump enjoys a Republican-led Senate, Democrats have kept their promise to delay confirmation of his nominees, even if they lack the votes to ultimately defeat them.

The Daily Signal reviewed Senate confirmation data for newly elected presidents, beginning with Jimmy Carter in 1977 through Obama in 2009. The chart above shows when the Senate confirmed each president’s Cabinet secretaries.

Those six presidents had an average of 10 Cabinet secretaries confirmed in their first week in office. President Bill Clinton had the most with 13. President George H.W. Bush had two nominees confirmed in week one, although three others remained in office from the Reagan administration.

The Senate confirmed two Trump nominees on Inauguration Day: James Mattis to be secretary of defense (98-1) and John Kelly to be secretary of homeland security (88-11). Senators were also supposed to vote Friday on a non-Cabinet nominee—Rep. Mike Pompeo, R-Kan., to be CIA director—but Democrats objected and delayed the vote until Monday. Most of Trump’s nominees haven’t yet advanced out of Senate committees. Some of those votes will take place this week. The Senate Commerce Committee, for instance, announced it would vote on the nominations of Elaine Chao for transportation secretary and Wilbur Ross for commerce secretary on Tuesday.

While it’s possible the full Senate could act on those nominees this week, there’s nothing officially on the calendar.

Senate Majority Leader Mitch McConnell, R-Ky., didn’t hold back in his criticism of Democrats for their delaying tactics.

“I urge colleagues to remember that we worked with the administration of former President Obama after he was first inaugurated,” McConnell said in a Senate floor speech Friday. “We confirmed seven members of his Cabinet the day he took office, and nearly the entire Cabinet was filled within two weeks.”

In 2009, Obama had 10 Cabinet secretaries confirmed after his first week in office. Nine of those nominees won Senate confirmation by voice vote, where an official tally isn’t recorded. The Obama nominee who faced the greatest GOP opposition—Timothy Geithner for treasury secretary—was approved 60-34 on Jan. 26, 2009, less than a week after Obama took office.

None of Trump’s nominees currently face the likelihood of defeat, yet that hasn’t stopped Senate Minority Leader Chuck Schumer, D-N.Y., from delaying the confirmation process.

Schumer said Sunday on NBC’s “Meet the Press” that he would continue to play the role of obstructionist.

“There are so many of these nominees that have different views than what the president-elect, now the president, campaigned on that of course there should be scrutiny,” Schumer said. “Now will we win some of these fights? Possibly. That’s why we have a debate.”

Friday’s debate over Pompeo illustrated the divisiveness in the Senate.

A new president’s national security team is usually the first to be confirmed. In the case of the CIA, both Director John Brennan and Deputy Director David Cohen resigned Friday, leaving the agency without a permanent director.

Schumer countered that Trump’s nominees are “poorly prepared.” He said Democrats were slowing down the process to conduct a more thorough examination.

“If I were the Republicans, of course I’d want to ram a Cabinet like this through. I’m embarrassed by it,” Schumer said on “Meet the Press.”

Earlier this month, The Washington Post called the Democrats’ tactics “an unprecedented break with Senate tradition.”

“Republicans treated a newly inaugurated President Obama’s nominees fairly, and Democrats should do so now,” McConnell said. “Our country is counting on it.”