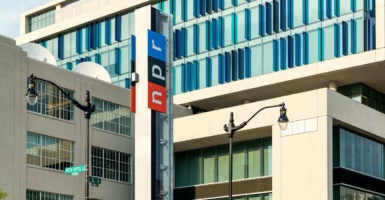 This year, the Corporation for Public Broadcasting, which funds NPR and other media entities, is receiving $445 million of taxpayer money. (Photo: John Greim John Greim Photography/Newscom)

Is National Public Radio’s description of an Obama urban directive as something that merely “links [government] funding to desegregation” fake news?

Well, it’s so slanted that if you had no prior knowledge of the program, and heard NPR’s depiction of it, you would just say to yourself, “Sounds good to me.”

But to many conservatives, including the man that President Donald Trump has nominated to be the new secretary of housing and urban development, Ben Carson, the Orwellian “Affirmatively Furthering Fair Housing” is a tortured interpretation of the Fair Housing Act.

To them, coercing suburbs to build high-density, low-income housing in order to reflect the national racial makeup—even when there isn’t a hint of discrimination—is an outrageous attempt to pursue the liberal dream of closing down the suburbs by changing their nature.

To Stanley Kurtz, writing in National Review, “the regulation amounts to back-door annexation, a way of turning America’s suburbs into tributaries of nearby cities.”

Carson, writing in The Washington Times, said the Affirmatively Furthering Fair Housing directive reminded him of the “failed socialist experiments of the 1980s.” That view was not reflected in NPR reporter Pam Fessler’s unflattering piece on Carson following his nomination. The piece referred positively to the housing program as “stepped up enforcement of the 1968 Fair Housing Act, which is intended to reduce segregation.”

Like other examples of NPR’s treatment of Cabinet appointments and other domestic and international news, Fessler’s report echoed almost exclusively the worldview of the left.

This is a characteristic that is shared to some degree by the Public Broadcasting System, NPR’s television equivalent.

And this attribute will become a problem for the taxpayer-funded Corporation for Public Broadcasting, which oversees both NPR and PBS, as the incoming Trump administration looks to make cuts in the budget—as it should.

To be sure, NPR and PBS will have the odd National Review editorial writer or conservative scholar on as a guest commentator once in a while. But that is not the issue.

The issue is that a conservative philosophy and outlook doesn’t inform the way the news is written and presented the way, say, Mother Jones seems to do.

We saw what happens when a journalist “gets” both sides. Fox News’ Chris Wallace received bipartisan praise for the way he moderated the last presidential debate in October.

As The Wall Street Journal put it at the time, there was a reason he was more effective than his preceding moderators:

He asked questions that would never have even occurred to the other moderators. Mr. Wallace’s personal politics are a mystery to us, but his position as an anchor at Fox News … means he is exposed to political points of view that are alien at most other media outlets.

NPR has done nothing to counter its persistent liberal bias, despite years of complaints from conservatives—including us—that its patent lack of diversity of thought was unfair and misguided for a tax-funded entity.

Several changes at the top during the past few years have had no apparent impact.

The partially taxpayer-funded public broadcaster appeared to be trying to turn a new leaf in 2011 when it brought in Gary Knell as CEO “to calm the waters,” following the ouster of Vivian Schiller. Charges of liberal bias under Schiller had revived conservative calls to defund NPR.

Knell lasted only 20 months, however, and several changes later, NPR in 2014 doubled down on its worldview. It named as its CEO Jarl Mohn, a former senior official with the American Civil Liberties Union who has given at least $217,000 mostly to “Democratic candidates and political committees” by NPR’s own admission.

NPR’s only response to conservative complaints about its liberal viewpoint is to deny that this is the case. It’s the “Who you gonna believe, us or your lying ears?” defense.

So, no wonder the reporting on the nominees was off. Carson wasn’t the exception. Here are several others:

Such details may have put into context the scathing, melodramatic attack on Pruitt by the Sierra Club, one of the groups that may now lose both influence and funds, which reporter Nell Greenfieldboyce included in her piece. The “conservative balance” lacked any of these details, but actually offered another negative: George Will’s observation that Pruitt had been “one of the Obama administration’s most tenacious tormentors.”

Not so for the analysis that Jeremy Hobson (host of NPR’s “Hear and Now”) conducted with Business Insider’s Kate Taylor. There, the worries of “labor groups” about Puzder’s “commitments to labor rights” were prominent.

“Anybody pushing for passage of laws that protect labor rights are going to have a bit of an uphill struggle,” Taylor concluded. There was no conservative counterweight.

Nor is NPR’s liberal slant limited to only Trump’s Cabinet appointments.

Right up front there was a trope about how “American mobsters used to run this place.” But actually, Cuba was a thriving economy when Castro took over in 1958, one that compared favorably with Mediterranean Europe or Southern U.S. states. But you didn’t hear that from Simon.

It shouldn’t surprise that the views held by the left form the background of many stories, as NPR either directly quotes liberal outlets as reference points or uses language that is undistinguishable.

On the very controversial public debate over whether men should be able to use women’s bathrooms if they identify as women, NPR’s Ethics Handbook uses as a reference point the National Lesbian & Gay Journalists Association’s guidelines in recommending that the debate be cast as “whether transgender people should be allowed to use public bathrooms ‘based on their gender identities or, instead, what’s stated on their birth certificates.’”

Many Americans—and not just conservatives—however, take issue with the notion that “a man can be trapped in a woman’s body” or vice-versa. Sex to them is a matter of objective biology, not a subjective social construct.

As the Washington Examiner put it before the end of the year, “Not everyone heeds the command to pretend that Caitlyn Jenner is a woman.”

These are views held by millions of taxpayers. By choosing only one side, NPR’s reporting can be as skewed as anything found on MSNBC—or conservative talk radio for that matter.

But because it is delivered in mellifluous and serene tones, a pitch which NPR staffers refer to with self-congratulation as “Minnesota Nice,” and because it has the stamp of the government’s endorsement, the reporting is considered objective and reflective.

The consumer, therefore, is likely not adding an extra layer of caution—the caveat emptor factor that one adds with Rachel Maddow or Sean Hannity.

To the question asked at the start of this piece:  No, NPR’s description of “Affirmatively Furthering Fair Housing” wasn’t fake news. But it wasn’t the whole news, either.

The 2017 federal appropriations for the Corporation for Public Broadcasting were $445 million. PBS gets about $300 million of that.

Defenders say that in the age of a $19 trillion debt, this is a “rounding error.” Well, if it’s so small, then maybe cutting won’t hurt as much, and the money can be used elsewhere, or returned to taxpayers.

NPR will survive without government funding. It has a good membership model. It also offers a good product, as does PBS.

But the new conservative administration and congressional majority coming in have a responsibility to the conservative base not to continue to fund a “public broadcaster” that leaves half the nation feeling ignored.

If it doesn’t, the new governing majority had better get used to seeing its policies traduced on a regular basis by NPR, the way the new Cabinet’s positions clearly have been.

Note: This article was updated to correct the name of the Corporation for Public Broadcasting.