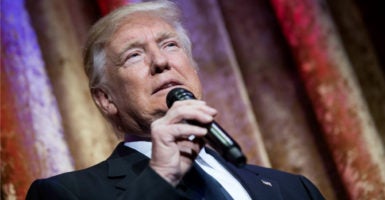 The Trump team received several mandates from the voters in November, but one of them was to get the bloated federal budget under control. (Photo: Kevin Dietsch/dpa/picture-alliance/Newscom)

The Hill reported Thursday that President-elect Donald Trump’s team is considering “dramatic” cuts to the federal budget, using as a baseline a report issued in 2016 by The Heritage Foundation.

Predictably, the left is having an absolute meltdown.

The bloggers at Slate fanned themselves with sanctimonious tweets from people who clearly hadn’t read the Heritage proposals. Meanwhile, the liberals at Salon and Mother Jones took to their fainting couches over the idea that Trump might eliminate the Violence Against Women grants—failing, of course, to note that the Government Accountability Office has already questioned the effectiveness of the grant program.

>>> Read “Blueprint for Balance,” The Heritage Foundation’s report on cuts to the federal budget.

What all this hand-wringing and hysteria ignores is why contemplating budget cuts is so vitally necessary.

This country is almost $20 trillion in debt. Our entitlement programs—Medicaid, Medicare, and Social Security—are headed toward bankruptcy. The U.S. continues to finance its spending with money it doesn’t have, making nations like China our largest creditor.

In 2015, the national debt exceeded 100 percent of everything the economy produced in goods and services—a warning siren if there ever was one, as countries with debt-to-gross domestic product ratios above 90 percent experience a significant reduction in economic growth.

The Trump Transition team is planning on some serious budget cutting based on a plan from the Heritage Foundation. https://t.co/iWUCYxYNNT pic.twitter.com/a1gMzeovF9

Without meaningful reforms, America is on track to become economically stagnant and permanently debt-bound.

That is why it should come as no surprise that the new president is focused on tackling America’s debt crisis. The Trump team received several mandates from the voters in November, but one of them was to get the bloated federal budget under control.

If it hews to the Heritage “Blueprint for Balance,” it’ll start by first tackling programs that are wasteful, duplicative, and inefficient—not the vital government services that feverish liberals would have you believe.

For example, have you heard of the catfish inspection program? This program is so wasteful and duplicative that the Government Accountability Office has tried no less than nine times to get rid of it. In 2016, the Senate voted to do just that, but without corresponding action from the House of Representatives, the program remains.

Eliminating it would save $14 million a year. (And lest you worry about the cleanliness of your catfish, a similar program already exists at the Food and Drug Administration, where it runs at a cost of $700,000 a year.)

Or maybe you didn’t know that the Environmental Protection Agency has a whole lot of office space that it isn’t using. If it leased all of it out, the agency could save $22 million in one year. On a similar note, if we eliminated just one of the many corporate welfare programs within the federal government, we could save anywhere from $15 million to $500 million a year.

These are the low-hanging fruit of budget cuts: easy and obvious ways to save money. Unfortunately, it’s still not enough to right the fiscal ship. Tough choices—trade-offs between spending and saving—must be made.

Over the years, the role of government has expanded into almost every area of modern life. Reducing spending requires reducing that footprint. That’s why the blueprint proposes to eliminate organizations like the National Endowment for the Arts.

While some may argue that government has a role in fostering the growth of culture, the government simply does not have the resources to do this while simultaneously promoting fiscally prudent growth.

As it stands, the American citizens are doing pretty well advocating the arts—in 2014, Americans gave $358 billion to charity, and of that, nearly $18 billion went to the arts and humanities. Rather than writhing in their sackcloth and ashes over this “draconian” cut in spending, liberals should be applauding this private philanthropy.

The same calculus goes for the tough choices that must be made at agencies across the government. Should we have an entire government office focused on promoting energy efficiency when the private market is already meeting this need? Should there really be an entire bank paying foreign firms and foreign governments to purchase American goods from already wealthy corporations?

Tackling spending requires a review of government priorities. It means looking at programs through a critical lens, with an eye toward responsible stewardship, efficient allocation, and the role of government.

To liberals who think every cent of government spending is sacrosanct, any budget cut means the end of the world. But to the rest of America, to those who want to live in a country with a strong economy with well-managed resources, the actions of the Trump team are a breath of fresh—and very necessary—air.