How a Jeff Sessions Justice Department Can Change Course on Crime 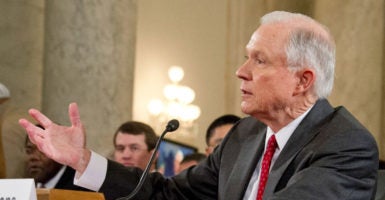 Alabama Sen. Jeff Sessions’ two-day marathon confirmation hearing left Americans with many takeaways—some on his many qualifications for the office of United States attorney general to which President-elect Donald Trump has nominated him, and others on the merit, or lack thereof, of his opposition.

In the weeks leading up to this hearing, opponents in Congress and the media grossly misrepresented Sessions’ record on several issues, including crime and criminal justice.

There were consistent themes throughout the testimonies at Sessions’ hearing that touch upon criminal justice issues and how the next attorney general might approach these matters differently from the current administration. These include support for law enforcement, respect for the rule of law, enforcement of immigrations laws, and punishing bad actors, not innocent third-parties, for white-collar crime.

Sessions captured in his opening remarks the reality for law enforcement under President Barack Obama’s leadership:

[I]n the last several years, law enforcement as a whole has been unfairly maligned and blamed for the unacceptable actions of a few bad actors. They believe the political leadership of this country abandoned them.

Sessions showed concern for police deaths and a commitment to reducing them, noting that “last year, while under intense public criticism, the number of police officers killed in the line of duty increased 10 percent” from 2015. He said that “this must not continue.

Sessions’ supportive stance toward police is bolstered by the words of Chuck Canterbury, national president of the Fraternal Order of Police, who called Sessions “a true partner to law enforcement” whose record demonstrates his commitment to “officer safety.”

Respect for the Rule of Law

Sessions also testified, as Heritage Foundation scholars have long observed, that “we have eroded respect for law and the whole constitutional structure where Congress makes the laws, not the executive branch.”

The Obama administration consistently took unilateral action to change the law—from refusing to defend the Defense of Marriage Act or enforce federal drug laws, to enforcing agency guidance documents (e.g. on private employment practices, or the sale of non-Affordable Care Act compliant health policies)—rather than accept the law as passed by Congress.

In a positive break from the Obama administration, Sessions noted that a guidance document is not an “amendment of the law” and that “department and agency attorneys don’t have the ability to rewrite the law to make it say what they would like it to say.”

Sessions consistently professed reverence for the Constitution and separation of powers, stating that regardless of whether he supported legislation as a senator, once he becomes attorney general he will ensure that the laws as passed by Congress are “properly and fairly enforced.”

As part of his pledge to “never have a political dispute turn into a criminal dispute,” Sessions vowed to recuse himself in any future investigations involving former Secretary of State Hillary Clinton.

Such clear respect for the rule of law would greatly reduce the partisan culture that has built up within the Justice Department under Obama.

The topic of immigration also loomed large throughout the hearing, and here Sessions also showed dedication to the separation of powers and the rule of law. Heritage scholars have noted how the Obama administration wrongly claimed “that its authority to set priorities and exercise prosecutorial discretion allowed it to institute an amnesty scheme without congressional action, despite the laws against illegal immigration.”

Sessions was spot on when he stated that “this country has every right to deport persons who are here unlawfully; who violate our criminal laws … and they should indeed be promptly deported.”

“If you continue to go through a cycle of amnesty,” he went on, “you undermine respect for the law and you encourage more illegal immigration into America.” Sessions’ statements indicate that as attorney general, he will leave immigration and deportation policy as a matter for Congress to decide rather than trying to set immigration policy through the back door.

Cracking Down on White-Collar Crime

Heritage legal scholar Paul Larkin has explained how corporate criminal liability can be problematic. For starters, it is less efficient than tort liability to redress corporate wrongdoing, writes Larkin, and it is “unfair to innocent employees, retirees, and stockholders.” Imposing heavy fines and penalties on the corporate entity, after all, punishes those individuals for someone else’s misconduct.

As Heritage scholars have written elsewhere, Sessions’ view is correct: “Just as ‘a corporation can only commit crimes through flesh-and-blood people,’ a criminal punishment, if it is to serve any special purpose not already accomplished by a civil fine, must inflict pain on one or more corporate directors, officers, or employees” who violated the law.

Despite opposition from some Democratic senators, it seems clear that Sessions will be confirmed. His hearing also made clear that on issues from civil rights to criminal sentencing, as Heritage legal scholar Hans A. von Spakovsky writes, “[e]xpect Jeff Sessions to ensure that the department is once again run on a professional, ethical, objective, and nonpolitical basis—one that respects the Constitution, the rule of law, and the best interests of justice.”