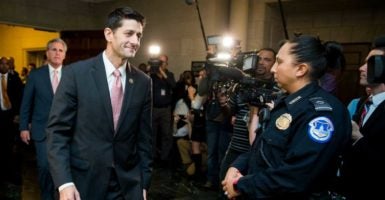 The House of Representatives took a major first step in repealing Obamacare, voting 227 to 198 on a resolution package that lays the framework for rolling back the health care law.

“We’re moving forward with a yes today, because … nearly every Republican ever who has arrived here since 2010 since this horrible piece of legislation was passed, made a promise to the American people that at first opportunity … [he or she would] repeal this damaging law,” Rep. Mark Walker, chairman of the Republican Study Committee, told The Daily Signal in a phone interview.

>>> What Happens for Consumers After Congress Repeals Obamacare

This legislation allows the House to begin laying the groundwork to repeal the health care law passed in 2010.

“The resolution is the first step toward getting to a Obamacare repeal,” Rachel Bovard, director of policy services at The Heritage Foundation, told The Daily Signal. “The repeal will be done. To get to that point, you first have to pass a budget resolution.”

The budget resolution sets a blueprint for what committees in Congress will be able to spend for the upcoming fiscal year.

Both resolutions are chamber-specific, which necessitates the fact that both chambers must pass a resolution before approaching the reconciliation process.

“Both chambers move on their own budgets, and their own reconciliation bills,” Bovard said in an email to The Daily Signal.

According to Bovard, reconciliation attempts will likely begin in the House and then move to the Senate. “Once both chambers pass reconciliation, it then goes to the president to sign into law,” Bovard said.

Reconciliation is a tool that can be used for budgetary bills that affect taxes, spending, and the deficit. It is useful for the repealing laws because it is protected from Senate filibuster and only a simple majority, 51 votes, is needed for it to pass.

The reconciliation process was also used by Democrats to pass parts of Obamacare and modify entitlement programs including Medicare and Medicaid.

>>> Meet the Next Chairman of the Republican Study Committee

Dan Holler, spokesman for Heritage Action for America, the lobbying arm of The Heritage Foundation, told The Daily Signal in an email that the resolution is an essential step in repealing Obamacare.

“Nothing happens quickly in Congress, but this is an essential first step in the effort to repeal Obamacare,” Holler said. “There will be many important policy questions as this process moves forward, but this budget resolution represents the only mechanism to expedite the Obamacare repeal process.”

The "Unaffordable" Care Act will soon be history!

Various other lawmakers shared their support in Congress taking this first step in repealing Obamacare.

Flawed. Failing. Not fixable. #Obamacare is broken, and today, #Congress took the first step toward #RepealAndReplace. My statement: pic.twitter.com/tUPaNuMscj

#BREAKING: The House voted today with my support to pass a resolution paving the way to repeal #Obamacare. https://t.co/fL3mm2zFms pic.twitter.com/jgmZcsWVKK

Former House Speaker Nancy Pelosi, D-Calif., voiced her opposition in the passing of the resolution.

With @HouseGOP sprinting ahead w/o plan, it’s worth remembering how carefully we considered #ACA. #FlashbackFriday https://t.co/yOVNGF9TtU

“This is a critical first step toward delivering relief to Americans who are struggling under this law,” Ryan said on the House floor Friday.

Walker said that the bill’s “primary purpose was to push back on the narrative that Republicans sit on their hands for six years and did nothing while the American people suffered under the worst piece of legislation … in the United States congressional history.”