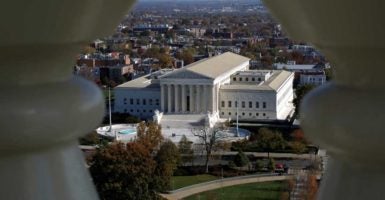 President-elect Donald Trump has narrowed his potential Supreme Court picks to only the federal appeals court judges on his broad list of potential nominees, according to CNN.

CNN reported that Vice President-elect Mike Pence said the team is “winnowing” the list that “is made up of mostly federal appellate court judges.” That doesn’t automatically mean all the others are off the list yet, according to Pence.

“There’s been some of the people on that list who have already gone through the process here as far as approving,” Manchin told CNN. “I guess they would look at someone who has gone through, somebody who’s made it through here before would have a chance.”

Trump said during his Wednesday press conference he would be making a decision on a Supreme Court justice choice within two weeks of his Jan. 20 inauguration.

The Trump transition team did not immediately respond to an inquiry from The Daily Signal as to whether the CNN report on the short list was accurate.

Here’s a look at all of the seven appeals court judges on the list, in alphabetical order.

One federal appeals court judge on the list of 21 who wasn’t mentioned in the CNN story is Judge Raymond Gruender, 53. He was named by Bush to the U.S. Court of Appeals for the 8th Circuit in Missouri. The Senate voted 97-1 to confirm him in May 2004. He previously was a prosecutor and served as the U.S. attorney for the Eastern District of Missouri. He received his law degree from Washington University in St. Louis.

“Somebody who’s made it through here before would have a chance,” @Sen_JoeManchin says.

With a few exceptions, such as Justice Elena Kagan and retired Justice Sandra Day O’Connor, most justices in modern times have been federal appeals court judges. The list Trump considered was intriguing because it included many state supreme court justices, as well as Sen. Mike Lee, R-Utah.

Generally, there is a reason most justices are drawn from federal appeals courts, said John Malcolm, director of the Edwin Meese III Center for Legal and Judicial Studies at The Heritage Foundation.

“Federal appeals court judges have written more legal opinions about matters that are likely to go before the Supreme Court, while state supreme court justices have ruled mostly on state law and not federal law,” Malcolm, a former deputy assistant attorney general, told The Daily Signal.

But there is also merit to having state supreme court judges, said J. Christian Adams, a former Justice Department lawyer and president of the Public Interest Legal Foundation.

“I’m big fan of state Supreme Courts just because I think they might have a better understanding of overreach by the federal government, but the list I saw, they are all good names and any one would be fantastic,” Adams told The Daily Signal.