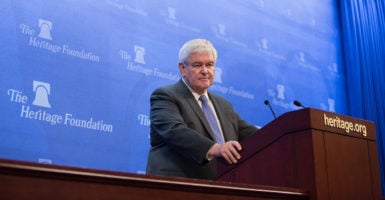 Former House Speaker Newt Gingrich speaks at the second part of a six-part series of talks on Trumpism at The Heritage Foundation in January. (Photo: Willis Bretz for The Daily Signal)

President-elect Donald Trump is on a collision course with the Washington establishment, former House Speaker Newt Gingrich said Thursday. A city that is accustomed to doing things a certain way contrasts sharply with Trump’s entrepreneurial approach, he observed.

Gingrich spoke at The Heritage Foundation for the second of a six-part series on understanding Trump and Trumpism. Thursday’s lecture examined the difference between Trump approach’s of “ahead of schedule and under budget” vs. the Washington approach of “behind schedule and over budget.”

The American people can expect Trump to govern similarly to how he ran his campaign—unconventionally, Gingrich said.

“What you have is a president-elect who is entrepreneurial rather than either corporate or bureaucratic, which is part of why he can tweet—he knows what he thinks,” Gingrich said. “He doesn’t have to go to his staff and say, ‘Would five of you sit down for a long period and come back and tell me whether or not I actually think this.’”

Following the event, Gingrich told The Daily Signal that the key to understanding Trumpism is to understand how Trump makes decisions. He pointed to Trump’s success of refurbishing the Wollman Rink, a public ice skating rink in New York’s Central Park. Trump refers to this project in “The Art of the Deal” as an example of what to expect in the future administration.

Gingrich noted that “Trump knows you get what you inspect, not what you expect.”

He added, “This tells you a lot about how he gets a Cabinet, how he designs a campaign.”

Gingrich compared Trump’s candidacy to his experience as a builder, placing an emphasis on Trump’s entrepreneurial spirit.

“If you build a building, it actually has to stand,” he said. “This isn’t like NASA, which has now had 14 studies on how to get to Mars, none of which has gotten us one inch closer to Mars. You could actually stack all the papers up and be closer to Mars. That doesn’t work if you’re actually constructing things.”

According to Gingrich, Trump’s success can be attributed to his focus on not only output and results, but also his relationships with others.

“If you’re going to be in the building business, you better get used to talking to people who build things.”

Gingrich referred to the president-elect as the most anti-left leader of all time, a person who will eliminate safe spaces and political correctness.

What makes Trump different is that he chooses not to focus on making himself great, but rather on making America great, Gingrich noted.

Gingrich will continue his six-part series on Trumpism at Heritage on Tuesday, Jan. 17. The speech will take place at 11 a.m. EST.