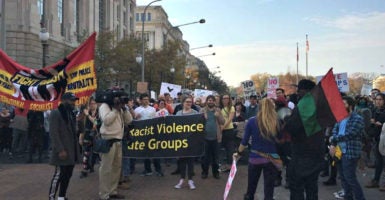 "We don’t ask permission or put our faith in electoral politics, instead, we use our bodies to stop the smooth operation of the system we oppose," Disrupt J20 organizers say. (Photo: DisruptJ20.org)

A coalition of leftist causes calling itself Disrupt J20 plans a series of organizing sessions, classes, protests, and other activities aimed at disrupting Donald Trump’s inauguration as president Jan. 20.

“We’re planning  to paralyze the city itself, using blockades and marches to stop traffic and even public transit.” —Disrupt J20 website

In appeals to “all people of good conscience,” Disrupt J20 seeks to bring thousands of fellow activists to Washington to join forces at American University beginning Saturday, six days before Inauguration Day.

“We’re planning a series of massive direct actions that will shut down the inauguration ceremonies and any related celebrations—the inaugural parade, the inaugural balls, you name it,” Disrupt J20 declares on its website, adding:

We’re also planning to paralyze the city itself, using blockades and marches to stop traffic and even public transit. And hey, because we like fun, we’re even going to throw some parties.

This photo graphic, as posted on Crimethinc.com, also bears these words in white block letters: NO PEACEFUL TRANSITION. (Photo: Crimethinc.com)

This all must be cool because the communist Workers World is covering it. The Daily Signal has not found direct calls for violence attributed to Disrupt J20 organizers, who did post this definition of what it means to take “direct action”:

Direct Action is when you take collective action to make social change without giving power over to an authority or middle person. We don’t ask permission or put our faith in electoral politics, instead, we use our bodies to stop the smooth operation of the system we oppose. Examples of direct action include the ongoing resistance at Standing Rock against the Dakota Access Pipeline, the street and highway blockades of Black Lives Matter, or the occupations of public squares during Occupy Wall Street.

Anarchist-affiliated media sites such as Crimethinc.com, however, suggest the potential for violence.

“Some are calling for blockades at the checkpoints around the parade route, in hopes that Trump will ride into office in front of silent, empty bleachers,” Crimethinc wrote. “Others are preparing to rove the city, supporting and defending other protesters and responding to situations as they arise.”

Disrupt J20 does not disclose or identify itself with nationally known groups or major donors. It says the “direct action” planned is “supported by the work of the D.C. Welcoming Committee,” which it calls “a collective of experienced local activists and out-of-work gravediggers acting with national support.”

That group isn’t funded by any nonprofits and has no connection with any political parties, according to the website.

“George Soros is a major funder of Alliance for Global Justice, a radical left-wing group that collected donations on behalf of the Occupy Wall Street movement,” Vadum told The Daily Signal, adding:

Alliance for Global Justice is now functioning as a fiscal sponsor for a group called Refuse Fascism that is heavily involved in the Disrupt J20 effort. A fiscal sponsor accepts donations on behalf of unincorporated or small groups and charges a modest administrative fee so that donors can deduct the donations from their taxes.

Kelly Kullberg, a founder of the American Association of Evangelicals, told The Daily Signal she doesn’t know who finances such efforts to cause chaos on Inauguration Day but considers them dangerous:

This ‘progressive’ worldview and funding accelerate the erosion of traditional wisdom like faith, family, and even freedom. It is regressive, and many people suffer the consequences. This should concern every American. We deserve to know more about this funding and their false narratives. We deserve truth. Disrupt J20 urges protesters to get started over the weekend by taking part in “Action Camps” from Saturday through Monday at American University in partnership with student groups there. These include a “racial justice” group called the Darkening, the Black Student Alliance, the Latino and American Student Organization, and the AU Student Worker Alliance.

American University spokeswoman Camille Lepre told The Daily Signal in an email that the school is neither prohibiting nor sponsoring the anti-Trump events being held in its facilities.

The camps also are set for Tuesday through Thursday at St. Stephen’s Episcopal Church in Northwest Washington.

Participants may join “Climate Convergence” workshops Wednesday and have the opportunity to “stand in solidarity with others working for migrant rights, racial justice, LGBTQ rights, and more.”

Such different movements and organizations need to stand as one, according to Disrupt J20 organizers, because this way they can form a more potent force to “stop the rollback of progress” under the incoming Trump administration. A map provided to Washington-bound protesters by the anti-Trump group Disrupt J20.

Disrupt J20’s “Call to Action” warns against the advent of a “security state” under Trump:

Trump stands for tyranny, greed, and misogyny. He is the champion of neo-nazis [sic] and white Nationalists [sic], of the police who kill the Black, Brown, and poor on a daily basis, of racist border agents and sadistic prison guards, of the FBI and NSA who tap your phone and read your email. He is the harbinger of even more climate catastrophe, deportation, discrimination, and endless war. He continues to deny the existence of climate change, in spite of all the evidence, putting the future of the whole human race at stake.

A group called the D.C. Anti-Fascist Coalition will stage something called the Protest the Fascist Alt-Right Deploraball on the night of Thursday, Jan. 19, at the National Press Club. Organizers say the event is being held as a protest of the Deploraball, an inaugural ball for Trump supporters there. Disrupt J20 plans its major events for Inauguration Day itself, beginning that morning in McPherson Square in Northwest Washington, where it asks activists to meet and regroup throughout the day. The website says:

We must take to the streets and protest, blockade, disrupt, intervene, sit in, walk out, rise up, and make more noise and good trouble than the establishment can bear. The [inaugural] parade must be stopped. We must delegitimize Trump and all he represents.

The Democratic Socialists of America, in partnership with Disrupt J20, has scheduled a “Stand Against Trump” event at 9 a.m. at the northwest end of the square.

Other events include “The Anti-Capitalist and Anti-Fascist Bloc” set for 10 a.m. at the Francis Scott Key Memorial. (Be sure to wear all black, participants are urged).

A “Festival of Resistance” is set for Columbus Circle, in front of Union Station, where many out-of-towners will arrive for the official festivities.

Disrupt J20 organizers are setting up “Activist Housing” for the expected protesters, including “mass housing” at an unnamed local church.

“Please bring a sleeping bag and anything else you need to be comfortable,” they say. “We will post community guidelines that all utilizing the mass housing option will be expected to follow to ensure everyone’s safety.”