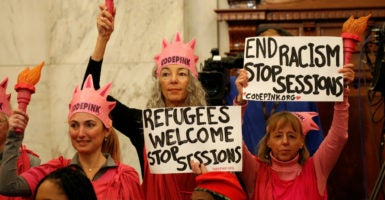 Observers of this week’s confirmation hearings for the post of U.S. attorney general might think it odd to see Sen. Jeff Sessions, R-Ala., rewind the clock to a single voter fraud case from the 1980s.

Under persistent questioning, Sessions has had to defend his decision to prosecute a case of brazen voter fraud—something that was his job to do.

The repeated references to this case by some senators represent just how far the civil rights industry has swerved from its honorable roots to derail a confirmation.

Character assassination, false testimony, performance protests aimed at securing retweets instead of reconciliation, and more have all been trained on the Alabama senator.

The oft-referenced voter fraud case Sessions brought involved the harvesting of absentee ballots by a trio then lionized as “the Perry County Three” in the mid-1980s.

As Sessions mentioned in his testimony, the offense was reported by local black complainants whose absentee ballots were being intercepted and voted without their consent.

To understand the obscene dishonesty used to reframe this matter against Sessions, we must sample the misleading statements that the National Association for the Advancement of Colored People and its allies have used to retell the story.

Patrick portrayed the ballot harvesting as a benign tool to enfranchise the historically disenfranchised. A reasonable person who hears that claim repeatedly might fall for it.

But there is a larger problem: It is simply untrue.

Contrary to what the NAACP and its friends may say, the right to vote exists with the individual, not the political machine that forces “assistance” on voters without their input.

Arguing that the decision to prosecute voter fraud is itself a disqualifying offense when seeking the job of attorney general demonstrates just how perverse the modern left has become with respect to the rule of law.

The left’s highlighting of this one case demonstrates that the institutional left is afraid. It is afraid it may soon lose enormous power because the Sessions Department of Justice will no longer participate in its radical racialist agenda.

For years going back before the Obama era, the Justice Department has served as a reliable signal caller to increasingly leftward actors that utilize racialized interpretations of law—particularly election policy—to ensure future political victories for Democrats.

As I wrote in my book, “Injustice,” the Justice Department under Attorney General Eric Holder wasted no time in performing a course change that ignored the enforcement of federal requirements for maintaining voter rolls. It also later zeroed in on state voter ID laws with such zealotry that it started losing cases—such as in South Carolina.

The Justice Department used the trappings of civil rights enforcement to advance the cause of the Democratic Party. Indeed, some academics writing about the Voting Rights Act have explicitly called for such partisan enforcement at Department of Justice. Michigan law professor Ellen Katz, for example, made this view plain in a law review article titled “Democrats at DOJ: Why Partisan Use of the Voting Rights Act Might Not Be So Bad After All.”

The mess that Sessions must clean up doesn’t end with naked partisanship in civil rights enforcement. It also reaches a racialist interpretation of civil rights, which protects some and neglects to protect others.

A Department of Justice inspector general report released in 2013 noted that there was open hostility among staff toward pursuing voting rights cases against black voters, especially where whites were harmed. (I pursued such cases in Noxubee County, Mississippi.)

The inspector general investigation also revealed that management-level officers “did not believe the Voting Section should pursue cases on behalf of white victims.” We now see this attitude manifest in the inaction against the violent, racially motivated attacks against Donald Trump voters, despite civil rights laws clearly being implicated.

This is the Justice Department that Sessions will inherit. But unlike his predecessors, the Alabaman’s record directly contrasts with much of the established culture there.

Nonprofit allies have grown comfortable knowing there are colleagues in the Justice Department who are happy to race-test a case before pursuing a civil rights violation.

The NAACP Legal Defense Fund and others can count on a friendly brief flown in from Washington, D.C., when targeting an election integrity reform in a politically valuable state. They can even benefit from the department’s voice in telling a court to exclude parties dedicated to voter ID laws from joining the table of intervenors in a case.

The financial incentive of certain organizations to maintain a Sessions-free status quo is also an important consideration. The groups allied with President Barack Obama’s Justice Department are more than email lists and press releases—these are giant edifices working to undermine the electoral system, which have become increasingly beholden to the largest progressive financiers.

The combined payroll of just a handful of leading organizations’ chief officers—to include the NAACP Legal Defense Fund, the Mexican American Legal Defense and Education Fund, the National Council of La Raza, and the National Action Network—is measured in the many millions, not thousands.

The professional struggle for racialized enforcement of voting rights has become an incredible vehicle for wealth creation inside the civil rights industry. Civil rights—genuine equality before law—has taken the back seat to power and wealth.

Attorneys general come and go. Every career Department of Justice veteran knows that. But what the establishment left knows even better is that a sea change in law enforcement priorities—like what Sessions promises—can be devastating to grand political designs and personal bank accounts alike.

With that in mind, it’s no wonder that a former governor and assistant attorney general for civil rights like Patrick would hint that Sessions’ decision to prosecute a voter fraud case in the 1980s was a discriminatory act of voter intimidation.

If such a political act moves the needle slightly closer to a “no” vote, it will have been a necessary endeavor for the establishment left. But it will be just one more of its shameful acts.